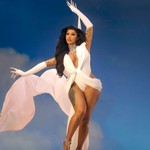 “I want God to come see me in my dreams when I take my nap today so I can kiss his feet and tell him how much I love him !!! Yoooooo shit is amazing yoooooo .I got no words .Actually I got a lot of words but I can’t type it all. NUMBER 1!!!!!” she exclaimed in her Instagram caption on Monday (March 22) while sharing a graphic of the top 10 songs on the Hot 100.

“Up” drew 22.7 million U.S. streams and 18,000 downloads sold in the week ending March 18, according to MRC Data. Lizzo commented that she personally accounted for “3 mil of them streams the other night,” while Cardi’s “WAP” collaborator Meg heated up the celebration with a string of fire emojis. Also on Monday, Cardi addressed her fans in an IG Live to thank those who helped her get “Up” top, including Lizzo, Jack Harlow, City Girls, Ciara, Doja Cat and Dream Doll for supporting her and the song through the dance challenge.

But the 28-year-old rapper has become increasingly aware of the voices who’ve tried bringing her down too. Candace Owens and Republican California gubernatorial candidate Errol Webber recently vilified her Grammys performance — especially her “WAP” team-up with Megan — which garnered more than 9 million views on YouTube in the week since the awards show aired on CBS. Cardi took the time during her celebratory speech to clap back at the “clout-chasing” conservatives and recall how they criticized her for being “a whore from Babylon” and “a bad influence to our children.”

“I forgot to thank the insane conservatives that was eating me up the whole entire week,” Cardi noted. “Y’all brought traffic to my Grammy performance…. This sh– brought streams not only to ‘WAP,’ but also to ‘Up.'”

Cardi’s husband Offset, who later joined her Live broadcast, theorized, “It was just all a disguise for the No. 1,” and hoped for “10 more to come.” Aside from her latest triumph, Cardi also opened up about the trials and tribulations no one saw her face behind the scenes and how she even wondered if God was “testing me where my faith is at.”

“Nobody see the hard work, nobody see the late nights…. Nobody see how f—ing hard it is,” she said, adding that she’s currently in “military studio album mode” for her sophomore effort.