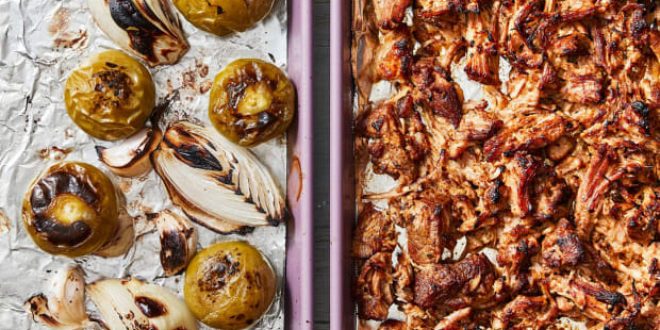 This recipe originally appeared in our Summer 2021 issue. Get the magazine here.

1. For the carnitas, cut the pork into 2 1/2- to 3-inch chunks. In a large bowl, mix the spices. Add the pork and toss in the spice blend. Season the meat with 2 teaspoons salt and 1 teaspoon pepper.

2. In a large Dutch oven, heat 3 tablespoons oil, three turns of the pan, over medium. Add the pork and cook, turning often, until light to medium brown on all sides, about 6 minutes. Transfer to a large plate.

3. Add 1 tablespoon oil to the Dutch oven. Add the onion, bay leaf, and cinnamon stick; season. Cook, stirring often, until the onion is slightly softened, about 6 minutes. Juice the orange and 2 of the limes; add juices to the Dutch oven, scraping to loosen browned bits. Add the beer, garlic, jalapeños, and orange zest. Return pork to the Dutch oven. Bring to a simmer over medium-high. Cover and cook over low for 2 hours, turning pork halfway through. Uncover, add 1 cup of water, and continue to cook, turning pork occasionally, until the meat is fork-tender and the sauce thickens, 30 minutes to 1 hour more, adding more water halfway through if liquid gets too low.

5. For the salsa, arrange a rack in the top third of the oven. On a large rimmed baking sheet lined with foil, arrange the tomatillos, onion, and garlic. Broil, turning the baking sheet occasionally, until the tomatillos and onions are charred and blistered, 10 to 15 minutes. When cool enough to handle, peel the garlic. In a food processor, blend the Hatch chiles, tomatillos, onion, garlic, cilantro, oregano, honey, cumin, and lime juice until it reaches the desired consistency for salsa. Season with salt and transfer to a bowl.

6. Wrap charred tortillas in a cloth napkin to keep them warm. Cut the remaining lime into wedges. Serve the carnitas with the tortillas, radishes, cilantro, seasoned onions, pickled jalapeños, and lime wedges.