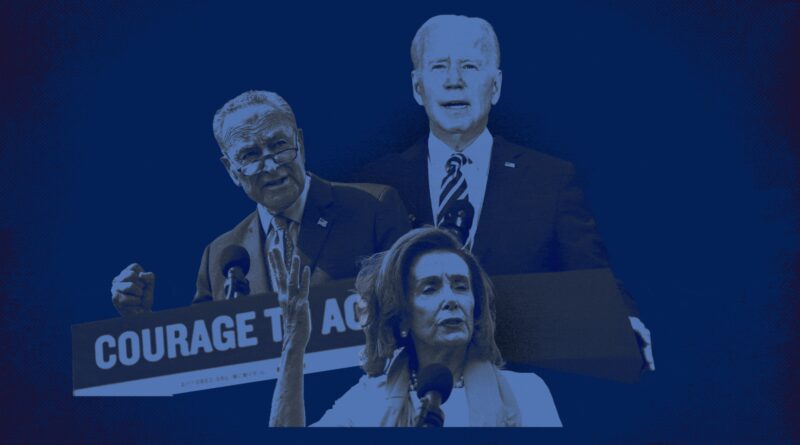 After the execution of 10 Black Americans in Buffalo and 19 school children in Texas, this time felt different. The country is rightly outraged, demanding action. Instead of promoting their game, the New York Yankees and Tampa Bay Rays used their accounts to promote gun violence prevention, celebrity 2nd Amendment boosters like Jon Voight began speaking out, and an NRA A-rated conservative Congressman committed to voting for an assault weapons ban.

President Biden addressed the nation emphatically, proclaiming “enough” in one breath and blaming Republicans for Washington Democrats’ inevitable failure to deliver in the next: ”We have to take the time to do something. And this time, it’s time for the Senate to do something. But, as we know, in order to get anything done in the Senate, we need a minimum of 10 Republican senators.”

Talking about reforms that are going nowhere has become the Democratic version of “thoughts and prayers.”

Yes, Republicans are an intractable problem. Gone are the days when a conservative legend Ronald Reagan would throw his full support behind the Brady Law and the Assault Weapons Ban. Today’s Republican party is not cowed by images of dead children, grieving parents or statistics. For evidence, look no further than Buffalo where just last week Chris Jacobs — a Republican Congressman whose district is adjacent to where the race-motivated mass shooting occurred days earlier— was swiftly black-listed by his own party and forced to drop his previously secure bid for reelection days after voicing support for an assault weapons ban.

But like magicians, Washington politicians —including the Democrats who control the White House and both branches of Congress and who say they support comprehensive gun reform — are masters of the art of misdirection. Republican opposition isn’t the only thing standing between gun violence prevention laws and the majority of Americans who support them.

The Senate’s 60-vote cloture rule did not appear out of thin air — it has been in place since 1975. Since then, Democrats have held a 60+ person majority a total of 4 1/2 years; Republicans have never held it. Bills still passed.

President Clinton did not have 60 Democratic votes in the Senate when he enacted the original assault weapon and high-capacity magazine ban in 1994.

And if the filibuster alone is the obstacle, why can’t Democrats be creative and consider reconciliation to bypass the 60 vote rule? It would take a well-skilled parliamentarian but is it really impossible to circumvent the Byrd amendment and identify a budgetary nexus on gun violence? In an average year, not only do guns in America kill nearly 40,000 people, and injure more than twice as many, it costs our nation $280 billion annually. Isn’t it worth exhausting the option?

Where is our cunning? Why are Washington Democrats slow walking this moment?

The dirty little secret is that Democrats don’t have the simple majority in the Senate necessary to enact meaningful gun safety reform.

Democrats had 60 votes in the Senate for a brief stint in 2009 and failed to take up any gun safety legislation. After Sandy Hook four years later, a new assault weapon ban was put on the floor. President Obama made it a priority. Nonetheless, it went down in flames 40-60, with 15 Democrats voting against it. Six of those Democrats—Manchin, Michael Bennet, Martin Heinrich, Angus King, Jon Tester and Mark Warner—still serve in the Senate majority today.

At this point it appears the likely scenario is that last month’s mass shootings will yield only expanded background checks and incentives for states to implement Red Flag Laws — in other words, Mr. Churchill, we’ve wasted the crisis.

If for no other reason than to hold all of our elected officials in both parties accountable, the public should demand a vote on a meaningful gun violence prevention package — including an assault weapon and high capacity magazine ban to know where every single member stands. Republicans didn’t block Schumer’s ill-fated abortion vote — they might be thrilled to tout their their unadulterated support for the 2nd Amendment and vote against an assault weapons ban. It’s past time to make members of both parties put their cards on the table.

In the meantime, state governments continue to be held hostage by federal inaction as even the strongest local laws are by definition only marginally impactful in a country where guns easily cross state borders.

So the real question is, how does America’s chronic gun violence problem – unique on the globe – finally end?

There is actually hope, but it requires adopting an entirely different strategy that doesn’t rely solely on federal action.

Large industry change occurs when their economic calculus changes. For decades Congress coddled Big Tobacco and Pharma. We should learn from that and approach gun and ammunition manufacturers the same way we did then — by using the legal system to hold them accountable, and in the process force them to change their bad practices or suffer crippling economic liability.

This strategy was on the verge of success 20 years ago when dozens of lawsuits were pending against gun manufacturers for negligence and product liability. States, cities, and plaintiff firms had effectively pursued litigation that could have bankrupted the gun industry for their negligence and its foreseeable consequences. The gun manufacturers themselves were ready to settle these lawsuits, making major reforms that dwarf any of the current proposals. Smith and Wesson, the largest handgun manufacturer in the country, had already accepted a groundbreaking global settlement that was announced by President Clinton.

What happened? George Bush was elected and successfully moved to make gun manufacturers essentially immune from civil litigation, making it the only private industry in the country to have such protection.

However, state governments are not powerless. In 2021 New York enacted first-of-its-kind in the nation legislation making it easier to bring civil lawsuits against gun manufacturers and dealers, bypassing the blanket immunity provided under federal law. The statute — which last month withstood a federal legal challenge— holds sellers, manufacturers, importers, or marketers of guns liable for a “public nuisance,” defined as actions that harm the public.

Blue and purple states should follow New York’s lead and enact similar legislation. Used judiciously, gun and ammunition dealers and manufacturers can finally be held financially accountable for the consequences of their products and distribution the same way Tobacco and Pharma were. At the same time, union members and public employees should demand that all public pension and retirement funds nationwide divest from companies associated with manufacturing and distribution of guns or ammunition.

Change will come from economic pressure on the gun manufacturers, and we can direct our energy into building up that pressure.

In the meantime, keep pushing our elected officials to at least be honest if not courageous— politicians follow when people lead, and it’s not too late to demand more.