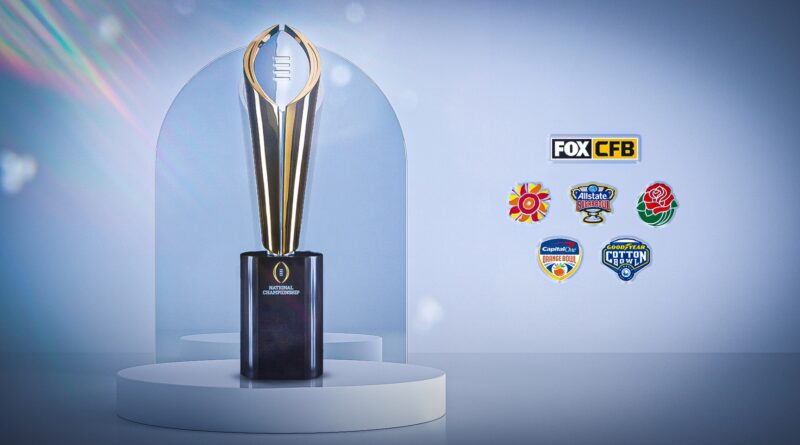 The No. 4-ranked Ohio State Buckeyes will play the No. 3-ranked Michigan Wolverines in the national title game. Or at least that’s what I think is going to happen.

A healthy Ohio State matches up well against No. 1 Georgia as well as Oklahoma did against UGA in 2017. Marvin Harrison, Jr. against Kelee Ringo? Stetson Bennett in a pitcher’s duel with C.J. Stroud and Ryan Day vs. Kirby Smart? It all ought to be considerable fun.

What’s more? I doubt Day is going to squib kick to UGA up 17.

It’s going to be difficult for Ohio State to overcome the home-field advantage UGA will enjoy in Atlanta, but all the Buckeyes asked for was a chance to play in this game. They have it, and now they must seize it.

Meanwhile, the Wolverines have pounded on every team they’ve faced this season. Even without star running back Blake Corum in the backfield, the Michigan offensive line has dominated front sevens all year.

The No. 3 TCU Horned Frogs will have to summon more than guts to beat the most physical team they’ll face all year.

Here is the complete bowl schedule, with my analysis and picks included for every game.

For times, viewing information and a live scoreboard, click here.

TCU got to this game by showing guts. But Michigan knows what this atmosphere is like and is chasing glory.

A healthy Ohio State looks built to defeat a Georgia team that has been anything but infallible throughout its 2022 run.

I’m projecting that this will be Ohio State vs. Michigan. The Game (again) but this time with a national title on the line. I love it.

This game could feature two of the best tailbacks in the country in Mohamed Ibrahim and Sean Tucker — if they play. Ibrahim has been otherworldly in the backfield for Minnesota, rushing for 1,494 yards — averaging more than 144 rush yards a game — and the engine that makes P.J. Fleck’s offense go.

Oklahoma lost four of its six games by a single score and three by a field goal. If the offense and defense can play well in the same game, they ought to match up well against Mike Norvell’s FSU.

RELATED: How to bet Oklahoma-Florida State

With Washington possessing one of the best passing offenses in the country and two former UW coaches — including one head coach in Steve Sarkisian — on the UT sideline, this game should mean a bit more to each party. Even if it doesn’t, Michael Penix Jr. and Bijan Robinson — if they play — are worth a watch.

Without Devin Leary, the Wolfpack took a step back. And Mike Locksley’s Maryland has played great, gutsy football all season. The Terps should handle their one-time ACC foe.

With Dorian Thompson-Robinson headed to the NFL, Chip Kelly’s Bruins will be without their first five-year starter against a Panther team that possesses one of the best running backs in the country in Israel Abanikanda.

The Gamecocks have been giant-killing in their last two outings — knocking off both Orange Bowl participants (Tennessee and Clemson) in back-to-back weeks. With ND quarterback Drew Pyne entering the transfer portal, ND will have to show up tough if it doesn’t want it to end up a pelt on the South Carolina hunting room wall.

It might be difficult for UW to overcome the loss of Titus Swen, who became just the 12th player in history to rush for 1,000 yards at the program that gave the NFL Buffalo Bills star Josh Allen. Ohio ought to be mad after falling short of winning the MAC title against Toledo and take it all out on the Pokes.

Could there be more orange in the Orange Bowl? Hardly. The Vols and Tigers will meet to find out who will likely roll into the 2023 offseason not only with a New Year’s Six bowl win.

This game is about Bryce Young — his absence or his presence. If the 2021 Heisman winner plays, Alabama ought to challenge the Big 12 champs. If he doesn’t, K-State should beat back-to-back SEC West opponents in bowl games marking their best season in Manhattan since 2012.

If you told me the over/under in this game was 10, I’d believe you. These teams play great defense and are anemic — sometimes dead in the case of Iowa — on offense. But the Hawkeyes are feeling good about earning the commitment of former Michigan quarterback and Big Ten champion Cade McNamara heading into 2023.

Meanwhile, UK will play without NFL Draft-bound Will Levis.

This game should be one hell of a fight. Illini coach Bret Bielema would run the ball on every play if he thought it could help him win, and Bulldogs coach Mike Leach won’t run it until he knows it can help him win. But the Illini hold the ball and play stifling defense. Leach is gonna need his best players to play like his best if they’re to win.

The Boilermakers have a chance to earn their ninth win this season with a win against the SEC West champs. But the Bayou Bengals looked lethal through the air with Garrett Nussmeier at quarterback against Georgia, and he’ll be a threat in this battle for bragging rights between the nation’s two best conferences.

With Lincoln Riley detailing the severity of star quarterback Caleb Williams’ hamstring injury, it’s an open question as to whether he’ll play against the Green Wave. Tulane, who has played its best season since 1998 and won the American Athletic Conference crown, might not care either way. They’re just that good.

Utah is the closest thing on the West Coast to a bona fide no-nonsense Big Ten squad. The Utes possess an outstanding offensive line and want to own the line of scrimmage — just like Penn State.

The Nittany Lions will play without star corner Joey Porter Jr. and wide receiver Parker Washington against Kyle Whittingham, Cam Rising and the Utes in a game Utah fell just short of winning against Ohio State last year. This year they’ll look to finish what they started.