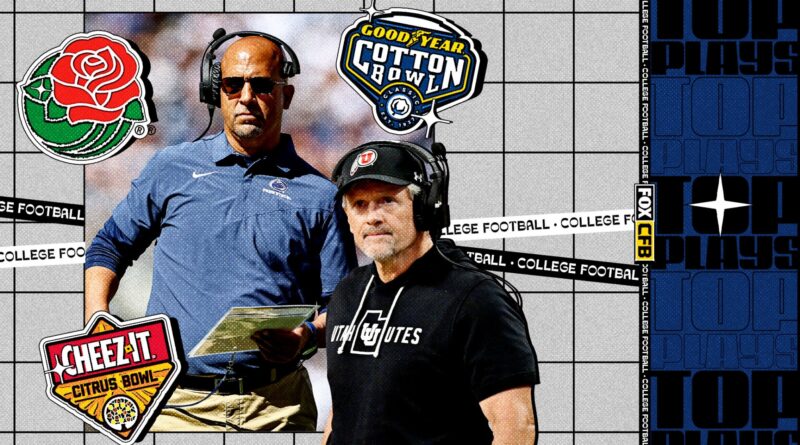 Aside from the College Football Playoff championship game a week from now, the sport’s postseason wrapped up on Monday with four enticing games on the schedule.

To begin the day, No. 22 Mississippi State beat Illinois in the ReliaQuest Bowl, its first game without late coach Mike Leach, 13-10.

Here are the highlights of Monday’s bowl games.

Penn State and Utah each went three-and-out to begin the game, followed by another Penn State three-and-out. Utah then got the ball into Penn State territory on its next possession before quarterback Cameron Rising was intercepted by cornerback Kalen King.

Eleven plays and 82 yards later, running back Nicholas Singleton ran in a 5-yard touchdown. Penn State led 7-0 at the end of the first quarter.

On the 13th play of the ensuing drive, Rising hit tight end Thomas Yassmin in the back-corner of the end zone to even up the game at seven apiece.

The Nittany Lions got that score back in a hurry.

On third-and-10 of Utah’s next possession, Rising hit wide receiver Devaughn Vele for a 47-yard completion. Three plays later, running back Ja’Quinden Jackson spun out of a tackle and ran through two more en route to a 19-yard touchdown run.

The game was tied at 14 at halftime.

Penn State took the lead in the third quarter when Singleton found a gap, burst through and turned on the jets. Nobody was going to catch him.

Trying to get that 15 and the ball back

Utah punter Jack Bouwmeester sold the contact following his late third-quarter punt in hopes of the Utes getting a 15-yard penalty to keep the ball. The refs didn’t buy it though.

Lambert-Smith helped Penn State get its largest lead of the game at the start of the fourth quarter when he broke open and hauled in an 88-yard touchdown grab to put the Nittany Lions up 28-14.

Kaytron Allen helped pile it on for Penn State in the fourth quarter, scoring on a one-yard touchdown run that put the Nittany Lions up 35-14 with a little more than 10 minutes remaining.

Utah would score a TD in garbage time for a final score of 35-21.

Both teams honored the Bulldogs’ late coach to start the game. Mississippi State took a delay of game penalty while holding a moment of silence. Illinois declined the penalty.

Leach was known for his offense, so it’s hard to imagine him enjoying the start of this game.

Illinois picked off Mississippi State quarterback Will Rogers twice in the second quarter, the second one sparking the first score of the game. A 10-play Illinois drive ended with quarterback Tommy Devito running in a 2-yard score.

Mississippi State got a field goal before halftime. It trailed 7-3 at the break.

Illinois got a field goal in the third quarter, but Mississippi State tied it up in the fourth.

Mississippi State got the ball with 1:50 remaining in the fourth quarter. After getting to the edge of field goal range, running back Simeon Price picked up 28 yards on the ground to get the Bulldogs to the Illini 2-yard line.

Then after moving back to the 9-yard line, kicker Massimo Biscardi made the game-winning 27-yard field goal. Mississippi State then ran Illinois’ lateral attempt back for a touchdown.

The Trojans opened the game with a 17-play touchdown drive, as quarterback Caleb Williams hit wide receiver Michael Jackson for a 9-yard score.

The Green Wave got on the board after USC’s second touchdown.

Quarterback Michael Pratt sparked the drive with a 40-yard run and later hit running back Tyjae Spears for a 14-yard gain. Spears then ran in a 3-yard touchdown, getting Tulane to within one score.

On the second play of the drive, Pratt hit wide receiver Jha’Quan Jackson, who ran around the USC defense for an 87-yard touchdown. The game was tied at 14.

We got a good one

USC got one of those scores back on its next drive when running back Raleek Brown took off for a 39-yard touchdown.

Tulane went three-and-out after the touchdown, and then USC got its lead back to two scores.

The Trojans got to the Green Wave 9-yard line in three plays. Shortly thereafter, Williams hit Rice in the back of the end zone for six. USC led 28-14 at halftime.

The Green Wave opened the second half with a touchdown. A drive that started with a 47-yard run from Spears ended with a 7-yard touchdown run from the Tulane running back. USC missed a field goal on its next possession, followed by Tulane making a field goal. The Green Wave trailed 28-24.

USC continues to add to the offensive highlight reel.

Late in the third quarter, Williams, moving to his left, completed a ridiculous 19-yard touchdown pass to Rice, who somehow reached the ball over for the score.

Spears does it again

Just like he did the last time Tulane touched the ball, Spears started the drive with an enormous pickup on the ground. This one went for 62 yards. Two plays later, Spears ran in a 3-yard touchdown.

Tulane failed to convert a two-point conversion and was unable to recover an onside kick.

Williams threw his fifth touchdown pass early in the fourth quarter, which was followed by USC turning a Tulane fumble into a field goal. Then Tulane got back to within one score.

On the first play of the drive, Pratt and wide receiver Deuce Watts hooked up for a 59-yard completion. Directly after the big play, Spears ran in his fourth touchdown. Tulane trailed 45-37.

USC took over at its own 1-yard line after touching the ball at said yard line on the kickoff. Two plays later, defensive tackle Patrick Jenkins tackled running back Austin Jones in the end zone for a safety.

The Green Wave came down the field and took the lead with nine seconds remaining in the game. Pratt hit tight end Alex Bauman for a 6-yard score, giving Tulane a 46-45 lead.

LSU and Purdue each punted on its first possessions, but the former found the end zone on its next drive.

Quarterback Jayden Daniels led the way, completing a trio of passes for 45 yards. Running back John Emery finished off the drive with a 1-yard score.

After forcing a Purdue punt, LSU put together another touchdown drive. On the eighth play of the drive, running back Noah Cain ran in a 9-yard score.

LSU forced another punt and then scored its third touchdown.

On the fifth play of the ensuing drive, Daniels completed a pass to tight end Mason Taylor, who then ran through Purdue’s defense for a 32-yard score.

The Tigers are having themselves a half.

On the fourth play of their next drive, Daniels took off for a 37-yard carry. Then Cain ran in his second touchdown of the game, giving LSU a 28-0 lead.

Purdue got the ball into LSU territory for the first time, but quarterback Austin Burton was intercepted by cornerback Jarrick Bernard-Converse.

One play after LSU pulled off a 45-yard trick play, a pass from wide receiver Malik Nabers shown below, LSU scored its fifth touchdown. Garrett Nussmeier connected with wide receiver Brian Thomas on a 10-yard score, giving the Tigers a 35-0 lead at halftime.

Purdue turned it over on downs to begin the second half, and LSU capitalized. On the ninth play of the drive, LSU ran a trick play that saw Daniels catch a touchdown pass from Nabers.

Purdue and LSU were each picked on its next drives, but neither turned the turnover into points. After Purdue punted on its next possession, though, LSU did more damage.

On first down of the next possession, Nussmeier got the ball to Nabers, who ran it 75 yards for a touchdown. LSU took a 49-0 lead.

The Boilermakers got on the board early in the fourth quarter when quarterback Michael Alaimo hit wide receiver TJ Sheffield, who ran the completion in for a 16-yard touchdown.