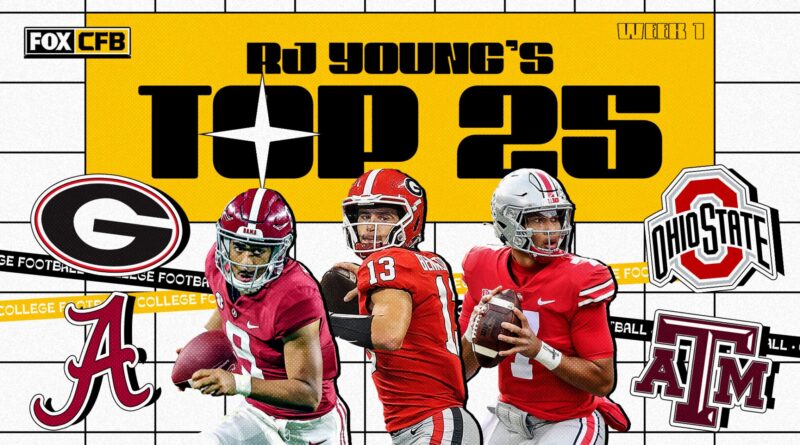 Following an entertaining Week 1 in college football, the question I most want answered is this: Who is going to beat this Georgia team?

On Saturday, the defending champs opened their season by throttling the Oregon Ducks, a team that’s not only ranked No. 11 in the AP Top 25, but which is led by former Bulldogs defensive coordinator Dan Lanning. Not only that, the Dawgs made it look easy.

The Bulldogs took this moment to remind us all that they’re the defending national champs, notching the most lopsided win by one ranked opponent over another all weekend. While the focus for a Kirby Smart team is usually on the defense, quarterback Stetson Bennett was the star, completing 25 of 31 attempts for 368 passing yards and accounting for four total TDs before getting the hook late in the third quarter.

Reigning Heisman winner Bryce Young recorded five TDs in the first half against the Mountain West champion Aggies, and Pete Golding’s defense gave up absolutely nothing. Nick Saban’s Crimson Tide might well be on course for another SEC and national title tilt against UGA.

The Buckeyes showed tremendous heart coming back from a 10-7 halftime deficit to win at the Shoe against a top-10 Notre Dame. Without star wideout Jaxon Smith-Njigba for most of the game, quarterback CJ Stroud formed a partnership with Emeka Egbuka that allowed the Buckeyes to move to 1-0.

RJ Young breaks down Ohio State’s 21-10 victory over Notre Dame. C.J. Stroud was huge for the Buckeyes, completing 24 of 34 passes for 223 yards.

The Aggies look like they’ll be keeping pace with Alabama in the SEC West with a 31-0 win against a Sam Houston State program in transition. After beating out quarterback Max Johnson for the starting job, Haynes King completed 20 of 31 attempts for 364 yards, with three TDs and two INTs.

I think Ohio State could end up playing in the College Football Playoff — if not the national title game — and Notre Dame had the Buckeyes on the ropes in the third quarter. The Irish gave up two TDs and were held scoreless in the second half, but covered the spread (17 points) and threatened the Buckeyes both offensively and defensively.

With Kenneth Walker III in the NFL, Spartans coach Mel Tucker needed to find a new bell-cow back in the offseason. He found two. Wisconsin transfer Jalen Berger and Colorado transfer Jarek Broussard combined for 174 rushing yards on 26 carries.

Bears quarterback Blake Shapen remains scarily efficient. He hit 17 of 20 passes for 214 yards and a TD, while the Bear rushing attack gained 259 yards in their season-opener.

The Razorbacks earned their first Week 1 win against a ranked opponent since 1975. Quarterback KJ Jefferson posted 285 total yards and four TDs in the win.

The Utes came up just short in a game that was tight the whole way on the road against the second-best team in the SEC East. The Utes gave up 15 points in the fourth quarter after leading 19-14 to start the period.

The Tigers are a 22.5-point favorite against Georgia Tech in their season-opener on Labor Day.

With Lincoln Riley at USC, many asked if Brent Venables could put together a staff that could score points. Not only did the Sooners put up 45 in Venables’ debut, they also did so without turning the ball over while limiting the Miners to just 316 total yards.

The Riley era began with a lot of points on offense, and a defense that proved itself to be just as capable. Alex Grinch’s D took three INTs back for TDs against the Owls, including one by Alabama transfer and linebacker Shane Lee.

Quarterback Caleb Williams accounted for 317 total yards and two TDs in his debut at the Coliseum.

The Cowboys opened the season with 44 points in the first half against Central Michigan, but gave up 44 points to the Chippewas at home. Pokes defensive coordinator Derek Mason needs to shore up his unit’s tackling before the conference slate kicks off, or it could be a long season.

BYU led 35-0 with 7:19 left in the second quarter. That’s who the Cougars have become, and it’s a reason to be wary if they’re on your team’s schedule this season.

Mo Ibrahim stepped back onto the field for the first time since Week 1 of 2021 and picked up where he left off, notching his 10th consecutive 100-yard rushing performance. The Gophers can go.

Led by quarterback Anthony Richardson, the Gators rushed for 283 yards against the Utes in Billy Napier’s debut as head coach — giving him his first win against a top-10 opponent as an SEC head coach.

This was Michigan’s largest season-opening win since 2016. While the jury is still out on who the starting quarterback will be, Wolverines defensive coordinator Jesse Minter answered the question of who will fill the void left by EDGE players Aidan Hutchinson and David Ojabo with former five-star Eyabi Anoma and Mike Morris showing up in a big way on Saturday.

Anoma officially joined the team just three weeks before the season began and recorded his first sack as a Wolverine on Saturday. Meanwhile, Morris is so athletic at 6-foot-6, 292 pounds, that Minter had him in a stand-up, foot-nine-technique — an outside linebacker position — at times during the game.

Iowa has never suffered from an identity crisis, and its season-opener against the No. 3-ranked team in the FCS was no different. The Hawkeyes became the first team since at least 2000 to win 7-3 without scoring a TD — two safeties and a field goal is all Kirk Ferentz’s team needed.

If you’re gonna beat Iowa this year, pack a lunch and bring a rock to fight with.

The Jaxson Dart era was a bit underwhelming with the USC transfer completing just 18 of 27 passes for 154 yards with one TD and an INT. However, Lane Kiffin will certainly take the win to open the weekend.

After jumping out to a 21-7 lead at half, the Wolfpack narrowly held off a double-digit comeback attempt from ECU after kicker Owen Daffer missed a game-tying extra point and then a potential game-winning field goal. N.C. State coach Dave Doeren will hope this game is an aberration and not a sign of what’s to come.

The Hurricanes scored at least 14 points in every quarter — including 28 in the second — in their win. Quarterback Tyler Van Dyke completed 13 of 16 passes for 193 yards with two TDs before calling it a day.

Defeated the University of Texas-San Antonio, 37-35 in 3OT

The Cougars scored 17 points in the fourth quarter to force overtime. Quarterback Clayton Tune finished with 257 total yards and four total TDs in the thriller.

Quarterback Quinn Ewers’ debut featured him completing 16 of 24 passes for 225 yards with two TDs and one silly INT.

Braelon Allen is still a dude. He rushed for 148 yards with two TDs on just 14 carries.