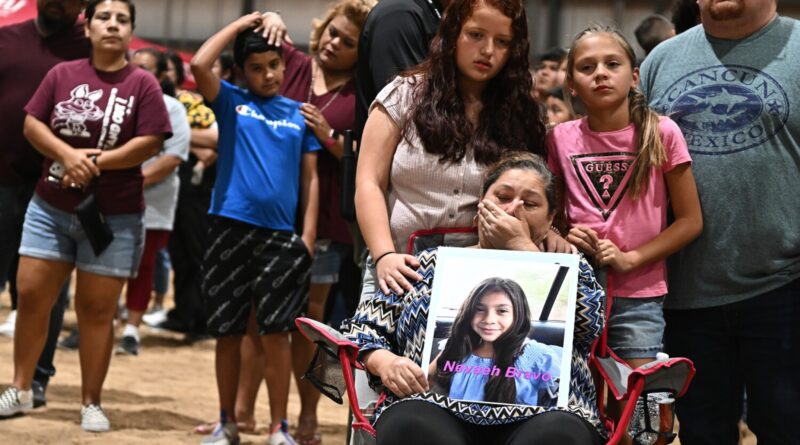 When I heard that a gunman had killed multiple schoolchildren in a predominantly Latino town in Texas, I immediately thought: white supremacist.

How could I not?

Just this month, a white man allegedly murdered 10 Black people in Buffalo, N.Y., while railing against Latino “replacers” in an online manifesto.

In 2019, another white man radicalized by neo-Nazi literature drove hundreds of miles to a Walmart in El Paso with the explicit mission to kill Latinos, prosecutors say. Twenty-three people died in that massacre, and multiple essays and columns tied the tragedy not just to our current era of racism and violence but to the Lone Star State’s long, shameful history of lynching Latinos.

We live in an America where millions view us as the enemy simply for being Latinos. So I girded myself to deal with yet another murderous cretin purposefully inflicting chaos on my community.

When I found out that the person who killed 19 fourth-graders and two teachers in Uvalde, Texas, on Tuesday was named Salvador Rolando Ramos, my stomach dropped.

The mass shooting is already among the 10 worst in U.S. history. In four, most of the victims were Latino: the 1984 San Ysidro massacre in a McDonald’s, the 2017 Orlando Pulse nightclub massacre, the El Paso massacre three years ago and now Uvalde, a town where nearly three-quarters of residents are Latino and the school district is more than 90% Latino.

Yet a Latino had never been the killer in any of those or any of the other 10 worst mass shootings — until Ramos.

We still don’t know his ultimate motivation. No statement has emerged, and his now-deleted social media accounts left few clues other than cryptic messages and recent photos of rifles he had purchased for his 18th birthday.

Former friends and classmates told the news media that Ramos was constantly bullied for his clothes and speech impediments, that he frequently clashed with his mom and grandmother — and that his emotional condition had deteriorated over the years.

But the sun hadn’t even set on the bloodshed in Uvalde, and online speculation had already tried to tie Ramos’ actions to who he was.

Some saw his Hispanic name and invoked illegal immigration despite law enforcement officials quickly stating that Ramos was born in North Dakota. After reading news accounts that Ramos wore eyeliner and endured homophobic slurs, others claimed that his supposed sexual identity pushed him to kill kids.

Communities of color have always had to deal with this essentialism when one of our own commits a massacre.

Asian Americans had to deal with ridiculous punditry in 2007 when photos emerged of the Korean-born student at Virginia Tech who killed 34 people posing in ways that referred to a violent Asian film.

Muslims always have to remind people that Islam is not a religion of terrorism just because someone invokes Allah while launching an attack on U.S. soil.

So when a minority kills on such a horrific scale as Uvalde, it’s easy and understandable to call for colorblindness.

But when it’s one of your own killing their own kind, then what?

We can’t pretend that the sickness of mass shootings is a whites-only phenomenon fueled mostly by racial hatred. Minorities are supposed to be “better” than that, we tell ourselves. We’re supposed to protect our own from horrors like Uvalde — and yet we can’t.

In raining destruction on the most innocent of innocents in a small-town school, Ramos showed that minorities can be poisoned by that most American of diseases — the urge to arm yourself to the teeth and kill your fellow human beings on an industrial scale. It is, by now, a most American quality. One that makes us virtually singular on the global stage. A country of mass killings, no war necessary, hyper-charged — nay, guaranteed — by our dangerously simple access to guns.

I’ve seen hundreds of social media posts by Latinos who say that the young victims in Uvalde reminded them of their nieces, nephews and children. I feel that too.

When I see photos of Ramos, I also see Latinos I know.

When I heard that Ramos suffered merciless ridicule from his peers, I remembered when I was bullied at a predominantly Latino high school, where being even slightly different was a scarlet letter.

When I learned that Ramos lashed out at others with verbal outbursts, I flashed back to how fellow students who suffered personal problems and needed help did the same — and how no adult seemed to notice.

When I read that Ramos legally bought guns for his 18th birthday with nearly as much ease as buying a Coke, I thought about the gun cult that captivates too many Latino males.

None of what shaped Ramos is inherent in the Latino condition. Rather, it’s as much a part of our America as anyone else’s.

The tragedy in Uvalde disproves what white supremacists say about Latinos and other minorities. We’re not unassimilable; we all become part of the United States.

What Ramos did — stemming from a pathology found almost nowhere else on Earth — is as American as apple pie.