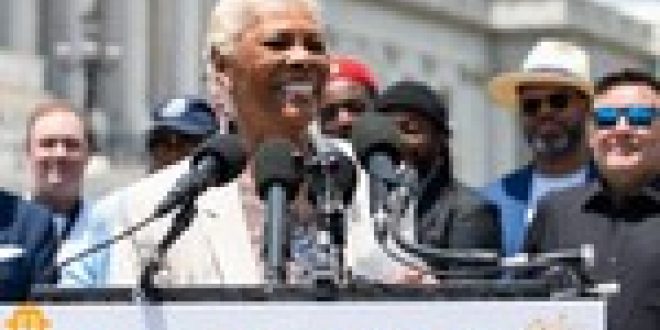 Unlike satellite/online radio and streaming services, AM/FM stations pay only songwriter royalties on the music they broadcast. To rectify that, the AMFA legislation would establish fair market value for radio performance royalties in the same way it has been for those other platforms.

The bipartisan bill is in part a response to the Local Radio Freedom Act, a non-binding resolution introduced last month by Rep. Steve Womack (R-AR) and Rep. Kathy Castor (D-FL) that opposes the imposition of a performance royalty, which proponents argue would be financially devastating for broadcasters. A companion resolution was introduced in the Senate by Martin Heinrich (D-NM) and John Barrasso (R-WY). Both resolutions are backed by the National Association of Broadcasters (NAB), which has long been opposed to enforcing a performance royalty payout on terrestrial radio.

Deutch and Issa introduced the AMFA at a press conference outside Capitol Hill on Thursday with assistance from singers Dionne Warwick and Sam Moore, along with Dropkick Murphys singer/bassist Ken Casey. In her speech, Warwick highlighted how drawn-out the fight for radio performance royalties has been by noting that she’s worked on the issue for nearly three decades.

“I personally was brought into this some 28 years ago by Frank Sinatra … that’s how long I have been actively involved,” Warwick said.

In his introduction, Deutch pointed to the longstanding rationalization on the part of AM/FM broadcasters that performers garner a benefit just by having their music played — in essence arguing that radio stations provide what amounts to free publicity for artists. “First of all, that was never a legitimate excuse,” said Deutch, “but it’s even less so today given that FM/AM radio isn’t the place that most artists are discovered.”

Of course, terrestrial radio’s decreasing relevance in terms of music consumption has been held up by opponents of radio performance royalties as a reason why they should not be instituted. The Local Radio Freedom Act “reaffirms Congress’s support for local radio stations and opposes new fees or taxes on local, free, broadcast radio which could jeopardize those very services upon which so many rely,” said Castor in a statement announcing the legislation last month.

In addition to establishing a performance royalty for radio broadcasters, the AMFA includes protections for songwriters to assuage fears that songwriter royalties would be undermined by the new bill. It would also create a tiered system under which smaller and nonprofit radio stations would be exempt from paying out the same performance royalties as major radio conglomerates. Stations that earn less than $1.5 million in annual revenue, for example, would pay just $2 per day for the right to play unlimited music. Meanwhile, college and other small, noncommercial stations could pay as little as $10 per year.

Accounting for the fact that foreign radio stations often exploit the AM/FM loophole in the U.S. to hold back performance royalties from American artists — even when the countries where the stations operate require them — the AMFA would also compel other countries to pay U.S.-based artists when their songs are played overseas.

Not surprisingly, the National Association of Broadcasters came out strongly against the AMFA in a press release, which  included the names of the 138 members of Congress and 18 Senators who have cosponsored the Local Radio Freedom Act.

“NAB strongly opposes the American Music Fairness Act or any imposition of a performance royalty on America’s local radio stations,” said NAB CEO Gordon Smith. “For decades, broadcast radio has enjoyed a mutually beneficial relationship with the music industry, launching and sustaining the careers of countless artists, promoting album sales and streams, and helping to foster a robust music-creation environment that is the envy of the world.

“Broadcasters remain open to working with the record labels to reach a comprehensive and reasonable solution to this issue that reflects the incredible value provided by local radio to musicians, labels and our millions of listeners over-the-air and online,” Smith continued. “It is unfortunate that the record industry refuses to have those discussions.”

Musician advocates released their own statements in support of the AMFA.

“We commend this bipartisan bill led by Reps. Deutch and Issa, and we thank them for joining us in the fight for fair pay,” said Harvey Mason Jr., CEO of the Recording Academy. “Artists create music that can bring us together and heal us, and they deserve to be paid when their work is played on FM/AM radio.”