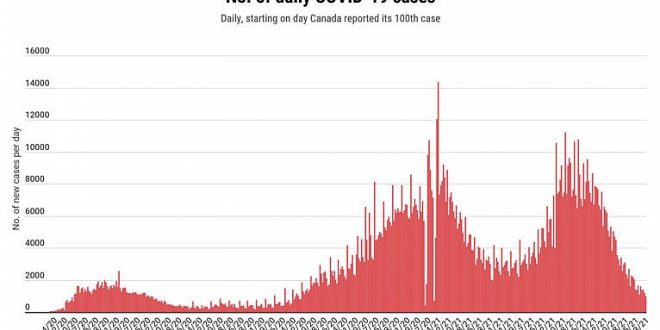 COVID-19 in Canada: How our battle to stop the pandemic is going

The latest numbers from across country showing where the virus is, how quickly it’s spreading and how fast we’re rolling out vaccines

NOTE TO READERS, July 16, 2021: With low variation in the country’s sharply reduced case counts, we have placed this post on hiatus. We continue post stories related to vaccinations and COVID-19 as they arise, and invite you to read them on Macleans.ca. Up-to-date case numbers continue to be available on COVID-19 Tracker Canada. Thanks to all those who followed my analysis on this post since the pandemic began. —PT

If Canada keeps to its current pace, then it should tie with the United States in just five days, according to modelling by Trevor Tombe, an economics professor at the University of Calgary, who is tracking Canada’s vaccine progress. Though the United States started its large-scale vaccination efforts much earlier than Canada, its program has all but stalled in recent weeks. Right now, Tombe calculates that it is fully vaccinating just 0.1 per cent of its population daily, on a seven-day average. In contrast, Canada’s pace is 1.15 per cent per day, more than 10 times the rate of its southern neighbour.

Manitoba is the top province in Ontario for fully vaccinating, with 49 per cent of its population having received two shots. Though well behind Vermont—the U.S. state leader at 67 per cent—Manitoba is ahead of more than half of the 50 states, including Texas (42 per cent), Florida (47 per cent) and next door North Dakota (39 per cent).

And Manitoba’s efforts are being closely followed by the rest of Canada. Overall, 68.5 per cent of Canada’s population has received first doses, compared to 56.5 per cent of Americans.

The relatively low percentage of Americans who are fully vaccinated has resulted in a resurgence of cases, with the highly infectious Delta variant of concern accounting for a majority of all cases. The United States is now reporting an average of 19,000 cases a day, up 60 per cent in the past two weeks. Hospitalizations are starting to increase, up 11 per cent in the past 14 days. Those increases are found largely in areas of low vaccination levels such as Arkansas (cases up 200 per cent, 35 per cent fully vaccinated), Alabama, Tennessee, Missouri and Louisiana. Authorities say that the overwhelming majority of those getting COVID-19 now are unvaccinated.

In Florida, where 47 per cent of the population is fully immunized, cases have more than doubled in the past two weeks to 3,400 a day, while hospitalizations are up by a third. Like most other states, Florida largely eliminated most public health measures during the spring, when vaccination efforts were peaking and caseloads were dropping. In one hospital in Missouri, more than 90 per cent of patients in the intensive care unit are fully intubated, CNN reports. “In our health care system in southwest Missouri, we are absolutely stretched, further than we were stretched last year,” said Erik Frederick, chief administrative officer at Mercy Hospital in Springfield, Missouri. “We’re seeing things that we didn’t see last year at a pace that is almost unbelievable, when you look at how quickly this accelerated.”

As Canada’s vaccination efforts continue, concerns of a possible fourth wave fuelled by the Delta variant of concern (B.1.617.2) are receding among experts. Dr. David Naylor, co-chair of Canada’s COVID-19 immunity task force, believes that the slow pace of lifting restrictions in many provinces “may help us mitigate the risks of a big Delta wave,” he said to CTV News. Canada quickly expanded its vaccination programs to young people and targeted hotspots, which meant extending the partial protection given by one dose to many more young people. In addition, young people are getting second doses at a faster pace.

And those differences are showing up in the case data. As with other countries when they were in the midst of their large-scale vaccination efforts, Canada’s COVID-19 data is improving. On July 11, the national daily average of new cases was 499. The last time the national average was below 500 cases a day was Aug. 31. And the number of people in hospital with COVID-19 is now 617, a drop of 284 patients in the past week and the lowest number hospitalized since Oct. 1.

While cases and then hospitalizations began declining in the spring, it took much longer for the number of deaths to start declining. One reason is that so many COVID-19 patients were admitted into ICUs and stayed there for weeks or months. Even now, more than half of the COVID-19 patients in hospitals across this country are in ICUs. As of July 11, there were 319 COVID-19 patients in ICUs, according to data collected by COVID-19 Tracker Canada. While that number is well down from the third wave peak of nearly 1,500 in late April, it’s still well above the 99 COVID-19 patients reported in ICUs exactly a year earlier.

For the pandemic’s Week 70, which ended on July 10, Canada reported 77 deaths due to COVID-19. Not only was that a 40 per cent decline from the previous week, but it was also the first time the national weekly rate had dropped below the 100-death mark since Week 29 at the end of September. The biggest decline occurred in Ontario, which reported 37 deaths compared to 83 in the previous week.