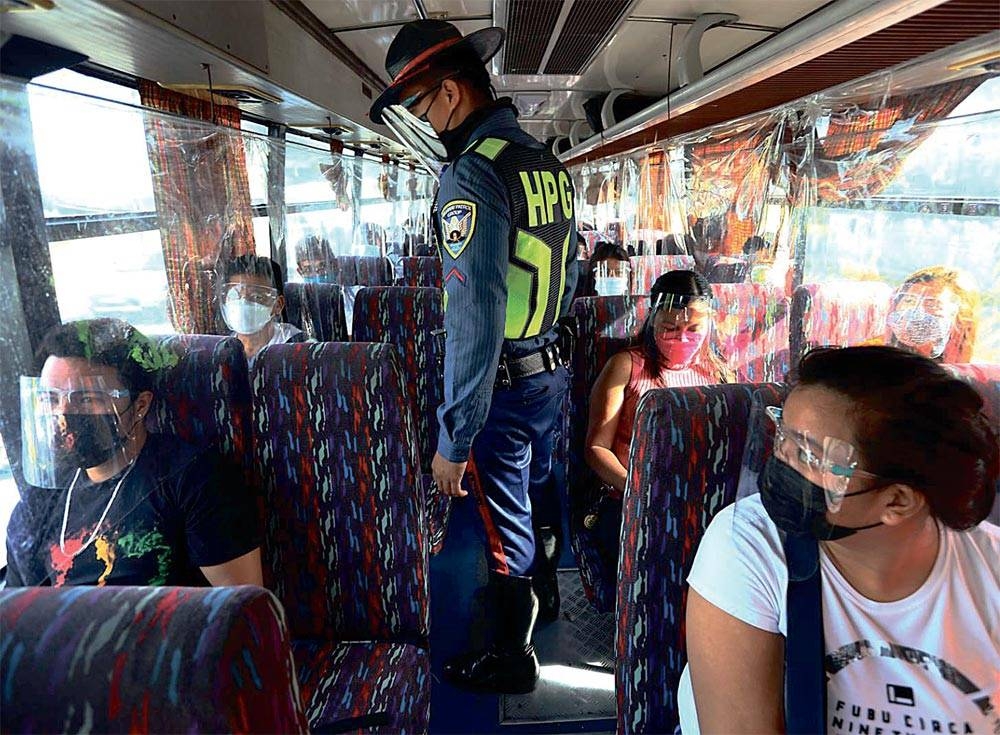 ROUTINE CHECK Policemen inspect a bus at the Coastal Road Expressway in Bacoor, Cavite on Aug. 1, 2021. PHOTO BY MIKE ALQUINTO

Metro Manila is experiencing a “serious surge” in Covid-19 cases, according to the independent OCTA Research.

OCTA made the assessment as the Department of Health (DoH) logged 8,735 new cases in the country on Sunday.

It was the third straight time daily cases have breached the 8,000 thresholds.

Covid bed occupancy in hospitals and intensive care units (ICUs) was up by seven percent from the previous week.

OCTA, which had called for a two-week “circuit breaker” or hard lockdown to stop the further spread of the virus, considers Pateros and the cities of Makati, San Juan, Malabon, Navotas, Las Piñas, Pasig, Muntinlupa, Valenzuela, Parañaque, Quezon, Marikina and Caloocan as “high risk areas.”

Of the active cases, 94 percent are mild.

The DoH also said almost half of the isolation and ward beds in Metro Manila are occupied.

Angara on Sunday called on the government to be more proactive in stopping the spread of the virus, especially with the highly contagious Delta variant already in the country.

“We are at the point where we are slowly opening up our economy and people are eager to get their lives back to normal,” he said in a statement. “But this new variant of Covid is threatening to disrupt our progress so we should not let our guard down.”

The Philippines “cannot afford to have a wait-and-see attitude with the Delta variant because when the virus spreads, it will be fast and controlling it then will be very difficult,” he said.

He said the Philippine Genome Center (PGC) is already doing sequencing for the Delta variant but at a “very low rate.”

The PGC evaluates only 750 samples a week, less than one percent of the recorded cases nationwide. “This is way below the ideal sequencing rate of five percent as indicated by the PGC itself,” Angara said.

The DoH has also reported the Bicol region, Eastern Visayas, Zamboanga Peninsula and the Bangsamoro Autonomous Region in Muslim Mindanao were having difficulty submitting Covid-19 samples for sequencing because of transportation problems and lack of laboratories.

Angara has filed a resolution urging the Senate to look into the current state of Covid-19 biosurveillance and genome sequencing in the country to improve the identification and classification of new variants and strengthen the country’s pandemic response.

“Our experience with the Covid-19 pandemic has shown we should always be prepared from day one and not wait until it’s too late to react,” Angara said.

The government should also speed up the implementation of its Covid vaccination program, he said.