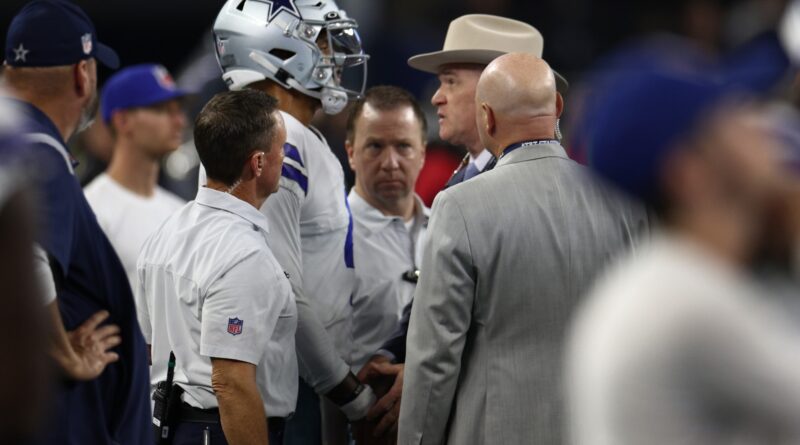 It’s hard to imagine how a 19-3 drubbing could get worse, but true to form, the Dallas Cowboys pulled it off.

Sunday night’s abysmal loss to Tampa Bay was already one of this team’s ugliest of the last decade. But their hope for a bounce back hinges on the health of Dak Prescott, and that hope took a hit late in the fourth quarter when Prescott exited the game after his hand collided with Shaq Barrett’s helmet.

Speaking to reporters after the game, Cowboys owner and general manager Jerry Jones said that Prescott will need to have surgery on his thumb and will likely miss several weeks. Prescott himself said he’ll schedule surgery on Monday morning.

The Cowboys entered Week 1 with high hopes, but their match against the Tampa Bay Buccaneers ended in a slew of disappointing events, capped with their quarterback, Dak Prescott, suffering a serious injury in the 4th quarter.

“Obviously, it’s not what you want to hear,” Prescott told reporters. “It’s not the worst thing that’s happened to me. It’s just another bump in the road.”

That bit might be true. But at the very minimum, it’s a significant injury to the most important member of the roster.

Not to add insult to injury, but Prescott left the game with 6:02 to play — and it’s not as if the Dallas offense was functioning effectively when its franchise quarterback was healthy.

The Cowboys drove the ball 54 yards for a field goal on the opening possession of the game, and literally nothing else worked the rest of the way. They finished with 244 yards of offense, 76 of those coming on the final two possessions, when the outcome was obvious.

To put it in perspective, three points is the worst tally in a season opener since the Cowboys were shut out, 28-0, by the New Orleans Saints in 1989 — Jones’ first season as owner and general manager.

The difference is obviously that the 1989 team was in the beginning of a rebuild, having just selected Troy Aikman with the No. 1 overall pick in the draft. That group finished 1-15.

This 2022 roster is the one Cowboys brass selected to follow up a 12-5 campaign. This was the group that Jones said “need to be viable in the playoffs” to be considered successful back on the first day of training camp.

It’s important not to overreact to one week of a long season, but nothing about this Dallas offense looked viable in Week 1.

Nowhere is that more obvious than the performance of Prescott and the Cowboys’ skill players. The team famously traded away Amari Cooper in the spring, looking to replace that production with veteran receiver James Washington and third-round draft pick Jalen Tolbert.

Washington broke his foot way back in August, sidelining him for the foreseeable future. And after an up-and-down summer, Tolbert was a healthy scratch for the season opener, leaving Prescott with journeyman Noah Brown and undrafted rookie Dennis Houston as his primary options behind CeeDee Lamb.

To be fair to the receivers, Prescott played one of his worst games as a pro. When he exited for the night, Prescott had completed an abysmal 14-of-29 passes for 134 yards, lowlighted by a horrific interception that saw him try to fit a third down pass into triple coverage.

To be fair to Prescott, the supporting cast was hardly helpful. Lamb, expected to make a leap into the NFL’s elite during his third NFL season, was targeted 11 times on the night but finished with just two catches for 29 yards. Of those other nine targets, he dropped two. And while Brown did rack up yardage in the game’s waning moments, he and Prescott failed to get on the same page when the deficit was still close.

There’s more, as you might expect when an NFL team scores three points. The Cowboys’ offensive line, reshuffled following Tyron Smith’s knee injury two weeks ago, endured a forgettable opener, as well. Of the team’s 10 penalties on the night, six were committed by Dallas offensive linemen. The group also surrendered four sacks to a swarming Tampa Bay pass rush.

Ezekiel Elliott — and to some degree, the line’s run blocking — was as much of a bright spot as you might be able to muster. The running back averaged 5.2 yards per carry en route to a 52-yard night, but the lopsided nature of the game took him out of the equation early into the second half.

The performance unfortunately overshadows what was actually a solid showing by the Dallas defense, expected to do some heavy lifting in Dan Quinn’s second season as defensive coordinator.

True, the Buccaneers did rush for 152 yards behind a wonderful performance from Leonard Fournette. But the Cowboys flustered Tom Brady into just 212 passing yards and an ugly interception, and the Bucs did finish with just one touchdown on the night.

It looked for all the world like Micah Parsons would write the narrative of the game. On back-to-back possessions in the second quarter, Parsons sacked Brady on two separate third downs, forcing Tampa Bay to settle for field goal attempts — one of which was missed.

Football romanticism would have you believe Parsons was holding the rope until Prescott could rally the offense, but it wasn’t close to the case.

Instead, this Dallas defense might have even more on its plate. The Cowboys have work to do on offense, and for the time being they’ll be trying to fix it without Dak Prescott.

Joe Burrow and Cincinnati’s warp-drive offense arrive at AT&T Stadium in a week. That’s a lot to figure out if they’re going to prevent the season from heading off the rails.

David Helman covers the Dallas Cowboys for FOX Sports. He previously spent nine seasons covering the Cowboys for the team’s official website. In 2018, he won a regional Emmy for his role in producing “Dak Prescott: A Family Reunion” about the quarterback’s time at Mississippi State. Follow him on Twitter @davidhelman_.