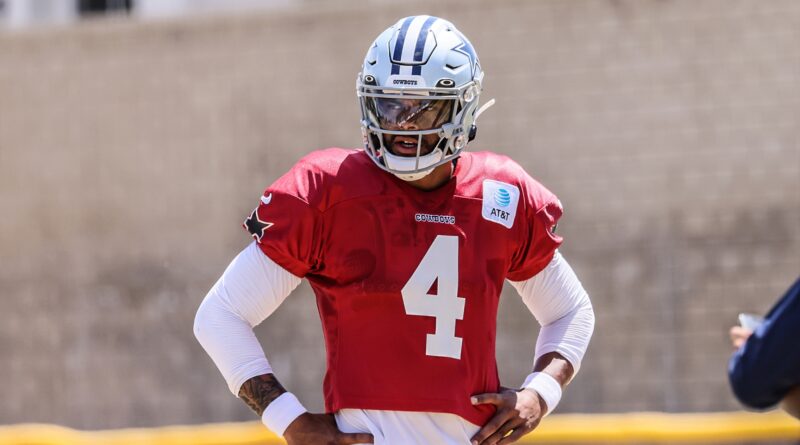 Dallas Cowboys star quarterback Dak Prescott is finally healthy, and the Cowboys are singing a good tune about him.

In fact, Cowboys executive vice president Stephen Jones told reporters this week that he believes Prescott “had his best camp that I’ve seen him have since he’s been a Cowboy.”

“Velocity, his accuracy, the whole thing,” Jones said. “Obviously, as the quarterbacks get older, they get better. The good ones do. They get better every year. There’s no question in my mind, I think he’s had his best training camp he’s ever had.”

That is lofty praise for Prescott, and on Friday, FOX Sports Cowboys reporter David Helman threw some caution on Jones’ comment, saying that it’s that time of the year when everyone says they’re at their best.

“If it’s the best camp of his life, I haven’t seen it,” Helman said on “Speak For Yourself.” “It’s the preseason, man. Everybody’s in the best shape. Everybody’s having the best camp. I think Dak’s going to have a good season, I feel confident about that.”

Too much praise for Dak Prescott?

Helman also expressed major concern about who Prescott is going to throw the ball to following the departures of Amari Cooper and Cedrick Wilson this offseason.

“Dak’s been good. He looks fine. He looks like a Pro Bowl quarterback at training camp without any receivers. I don’t know who he’s throwing to. He’s trying to make it work with a bunch of guys we don’t know the name of.”

In Skip Bayless’ mind, Jones is taking a page out of his father’s playbook with the message he delivered regarding Prescott.

Bayless didn’t question whether Prescott has had the “best camp” of his career, which comes after he statistically had his best season as a passer (4,449 passing yards, 37 passing touchdowns, 68.8 completion percentage and a 104.2 passer rating). He questions, though, if Prescott’s play will be strongest when needed most.

“The crux of my issue is that he’s crumbled down the stretch in each of his last two seasons,” Bayless said. ” … As we approach another great NFL season, the two quarterbacks on the hottest seats are Dak Prescott in Dallas and Kyler Murray in Arizona because they both got paid [recently] and what do they have in common? Both of them have fallen on their face masks down the stretch in two straight years.”

Is Dak Prescott having his best camp?

Skip Bayless acknowledges that Dak Prescott could be having the “best” training camp of his career, but it doesn’t matter if he struggles down the stretch again.

Prescott performed well in the Cowboys’ final three regular-season games last season, throwing 12 total touchdowns and having a passer rating over 100 in each of those games.

However, Prescott completed just 23 of 45 passes for 254 yards with a touchdown and an interception in the 23-17 playoff loss to the 49ers.