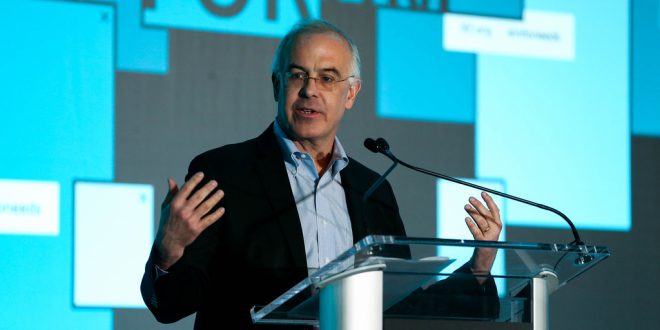 As America continues to try to define itself in a new century, the formerly conservative NYT columnist has fully joined the progressive camp.

Once a self-identified conservative, New York Times columnist David Brooks has for some time now been engaged in a personal journey of sorts. To judge by a recent column bearing the title “The American Identity Crisis,” that journey has now concluded: Brooks has found a new home in the progressive camp. Yet where he has landed and how he got there invite reflection.

“For most of the past century,” his column begins, “human dignity had a friend — the United States of America.” After a brief check-the-block acknowledgment of our nation’s imperfections, Brooks returns to celebrating its achievements abroad, assigning to the United States primary credit for defeating the evil ideologies of the 20th century and thereby spreading peace, freedom, and democracy around the world.

This self-congratulatory interpretation of America’s recent past has long found favor not only among newspaper columnists, but also with politicians campaigning for high office, our current president not least among them. It is our national equivalent of sacred scripture—a secular version of the salvation history in which Christians profess to believe.

Alas, Brooks continues, “Then came Iraq and Afghanistan and America lost faith in itself and its global role.” The audacity of that sentence—equivalent perhaps to “Then came bin Laden and the Towers fell”—brought me up short. In the blink of an eye, context disappears as Brooks skirts past the question of how and why the United States enmeshed itself in two unwinnable wars. He chooses instead to focus on America losing its faith.

Pursuant to its global role, Brooks contends that until Iraq and Afghanistan “came,” the United States had shared with others “vital ideals” that define the American way of life. Those ideals include “democracy and capitalism,” of course: so far, so good. But Brooks’s inventory of operative ideals does not stop there. Also included are “feminism, multiculturalism, human rights, egalitarianism, L.G.B.T.Q. rights and the dream of racial justice.” All of these together, Brooks writes, come “intertwined in a progressive package that puts individual dignity at the center.”

Credit Brooks with accurately describing the contents of that “progressive package,” particularly its present-day preoccupation with race, gender, and sexuality. Yet the conservative that Brooks once professed to be would have balked at the reference to “individual dignity.” In a progressive context, individual dignity is a euphemism. It is a leftwing equivalent of “free enterprise,” a term employed by some right-wingers to provide a moral gloss to policies that exalt market values over human values.

As a practical matter, today’s progressives have no intention of contenting themselves with mere dignity. They aim to redistribute power in ways that will play to their own preferences on matters related to race, gender, sexuality and a host of other issues. No surprise there: Politics ain’t beanbag.

Ultimately, the progressive camp that Brooks now inhabits seeks to dismantle existing limits on individual choice. It is intent on rendering obsolete and then destroying traditions and inherited practices that inhibit autonomy. Examples of traditions that have already been demolished are not hard to find: monogamy, two-parent families, marriage as a union til-death-do-us-part.

On that score, the team that Brooks has now joined is obviously winning. For that very reason, his departure should prompt some conservative soul-searching.

The actual locus of “The American Identity Crisis” to which Brooks’s essay alludes has nothing to do with reviving the missionary project of exporting American values to a world peopled with the likes of Iraqis and Afghans stubbornly clinging to their own traditions and perhaps less than impressed with our stories of how we defeated Nazi Germany and won the Cold War. Rather, the ongoing identity crisis has everything to do with resolving our own internal kulturkampf.

As an episode in that larger struggle, the defection of a famous New York Times columnist figures as a minor but telling event. Perhaps in jumping to the other side, Brooks is bowing to the inevitable. I am fully prepared to consider that possibility, even while having no intention of following his example.

Certainly the values that figure prominently in my own conception of conservatism—duty, obligation, and fidelity—have fallen out of fashion, except, of course, when they happen to coincide with personal preference. (It’s cool if you want to join the Marine Corps; it’s equally cool if I limit my military service to playing Call of Duty: Black Ops). As for the Republican Party, as long as it remains enamored with Donald Trump, it can have nothing useful to say on anything related to the values to which Americans in the present century should subscribe.

That Americans will resolve their crisis of identity any time soon appears improbable. Certainly no such resolution will occur in my own lifetime. In the meantime, the best we can hope for is a bit of breathing room to sort out our differences. This will be best achieved by avoiding more costly and needless wars.

Perhaps if David Brooks reflects a bit more on how Iraq and Afghanistan “came,” he will also revise his views on that score as well. We should welcome his thoughts.

Andrew Bacevich, TAC’s writer-at-large, is president of the Quincy Institute for Responsible Statecraft. His new book is After the Apocalypse: America’s Role in a World Transformed.