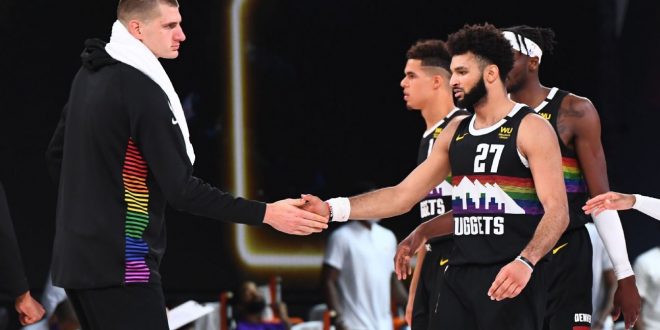 A 20-point Denver Nuggets lead had dwindled to four with over two minutes left in the game when Nikola Jokic handed the ball off to Jamal Murray.

Murray backed Alex Caruso off the 3-point line only to spin and drill a step-back 3. On the next possession, Murray hit Paul Millsap for a dunk with a beautiful pass on two defenders. And then Murray sealed Tuesday’s Game 3 of the Western Conference finals with a 29-foot rainbow shot as Denver held on for a 114-106 win over the Los Angeles Lakers in Lake Buena Vista, Florida.

“Now I know every night what I’m getting from Jamal,” Denver coach Michael Malone said. “Last year, we knew what we were getting from Nikola, but what kind of game would Jamal have. That’s no longer the case.

“We have two superstars in Nikola and Jamal.”

The Lakers have arguably two of the NBA’s top five players in Anthony Davis and LeBron James, who combined to score 57 points Tuesday. But it was Murray who raised his level in crunch time in Game 3, orchestrating an 8-0 run that came in the final 2:17 to hand the Lakers their first loss of the conference finals.

Murray nearly matched James, who had a triple-double with 30 points, 11 assists and 10 rebounds. The Nuggets’ guard tallied 28 points, 12 assists and 8 rebounds to help Denver rebound from losing Game 2 on a crushing buzzer-beating 3 by Davis.

The Nuggets have overcome a 3-1 deficit in both the first and second round of these playoffs, against the Utah Jazz and the LA Clippers, respectively. But this was the first time the Nuggets had started a series down 0-2 in the past two postseasons.

“I had no doubt that we were going to show up tonight,” Malone said. “The reason I didn’t have any doubt is because we won six straight elimination games. Everybody always has us packing our bags and leaving, but we’re not ready to go. For some reason, we love this bubble.”

Murray, though, loves shooting in crunch time in the bubble. After the Lakers made a 22-6 run to cut the deficit to four, Murray answered with a 26-foot 3, the pass to Millsap and then the 29-foot dagger.

The guard now has eight clutch time 3-pointers this postseason, second most in a single postseason over the past 20 years behind only Stephen Curry‘s nine (2016), according to ESPN Stats & Information research.

The Lakers might have the best one-two punch in the league. But Malone says he feels he has a superstar combo, as well, a duo looking to even this series in Game 4.

“This gives us that much more confidence going into this series,” Malone said. “Letting them know that we’re here, we’re in this for the long haul.”