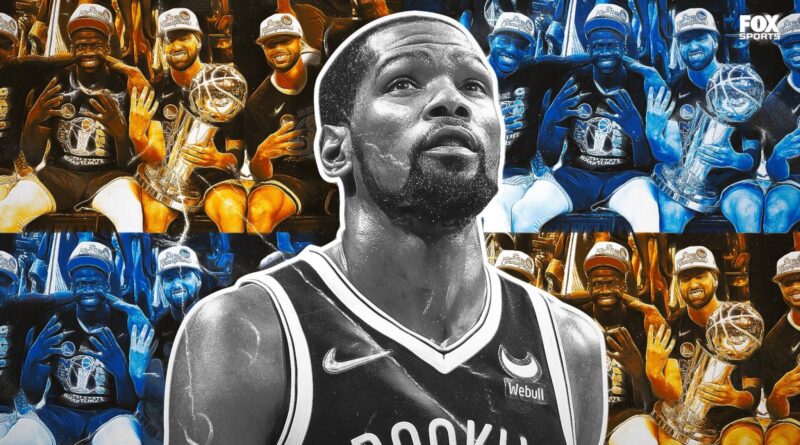 Kevin Durant finally broke his silence surrounding the 2022 NBA Finals, congratulating his former team, the Golden State Warriors, on their win. He then shared some head-scratching thoughts on social media about his legacy being in question in wake of their victory.

“I’ve been dead since July 4th, 2016,” he said, in response to someone who suggested his legacy is now dead.

What’s the significance of that date? It was the day that Durant revealed his decision to leave Oklahoma City and sign as a free agent with Golden State — right after the Warriors eliminated the Thunder from the Western Conference finals.

Durant went on to appear in three consecutive NBA Finals with the Warriors, winning championships in 2017 and 2018. In his first season in Golden State, Durant was part of a truly dominant team that lost only one game across four playoff rounds en route to the 2017 title.

Durant left Golden State to do his own thing in Brooklyn in 2019. The Warriors missed the playoffs for two consecutive seasons after his departure before taking home the title this year — their fourth title in eight years.

On the other side, the Nets have only gotten as far as the semifinals once in Durant’s three years in Brooklyn, and were swept in the first round of the playoffs twice, including this season by the Boston Celtics.

On Monday’s “First Things First,” Nick Wright reacted to the Nets star’s remarks and explained why he thinks Durant’s legacy isn’t in question, despite the Nets’ abysmal early playoff exit.

“This must be so madly frustrating for Durant. In one way because there is a randomness that he has no control over,” Wright said. “Going into the year, two starting players on two championship contending [teams] — [Were] they even gonna be allowed to play due to their vaccine status? … The one that plays with Kevin Durant (Kyrie Irving) didn’t get vaccinated, [while] the one who plays with Stephen Curry (Andrew Wiggins) did and played a key role in the Finals. KD [has] got nothing to do with that.”

Nick Wright gives his thoughts on Durant’s response to Golden State’s NBA Finals win and shared whether he thinks KD’s legacy is now in question.

“The other part of this is — and this to me rears its head with all these KD legacy discussions — we in the media must be fair and honest and admit this: When Durant was in Golden State winning titles we all said almost unanimously that, ‘Hey, guess what? If KD wants a real legacy, he’s gotta leave.’ And then he left, and we’re like, ‘Oh, you idiot. You ruined it all.’ So, I do think it is true [that] these playoffs went as bad as they could have gone for him … so in that regard, I empathize with him,” Wright added.

Wright’s cohost Chris Broussard wasn’t nearly as forgiving, saying that the Warriors’ title certainly impacts Durant’s legacy negatively, and pointing out that the Nets star is being left out of many recent top-10 conversations when just last year he was a staple on nearly everyone’s list.

“There is not a person on Earth who [has] ever watched a basketball game who wouldn’t say Kevin Durant isn’t phenomenal. So, that’s not the discussion,” Broussard said. “Here’s just the facts. What is the biggest discussion in basketball right now? Is Steph Curry top 10 all-time? Are we having that discussion about Durant? No.

“A year ago, most people had KD ahead of Steph,” he added. “The tables have turned, so at the very least, he has moved down a notch and a guy that was behind him has leapfrogged him.”

Get more from Kevin Durant Follow your favorites to get information about games, news and more.