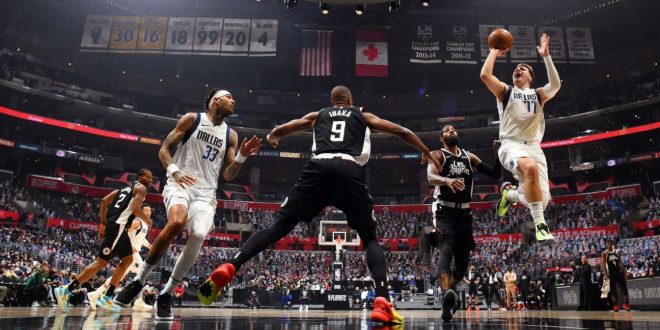 Doncic added to it with his 31-point, 10-rebound, 11-assist afternoon to lead the Mavericks to a 113-103 win over the LA Clippers in Saturday’s Game 1 at Staples Center.

It was Doncic’s third triple-double in seven playoff games, all against the Clippers, who booted the Mavericks from the bubble last season in a six-game first-round series. It was the second time the 22-year-old Doncic had scored at least 30 points in a playoff triple-double, a feat previously accomplished at that age by only LeBron James and Kareem Abdul-Jabbar in NBA history, according to ESPN Stats & Information.

“This is his time of year,” Mavericks coach Rick Carlisle said. “He’s one of the smartest basketball players you will ever meet at any age at any level.”

Doncic figured out and exploited every defensive tactic the fourth-seeded Clippers attempted in the series opener. He dominated the first three quarters and, once L.A. sold out to take the ball out of his hands late, served as a facilitator as Dallas closed out the game down the stretch.

“When they don’t double, attack it,” Doncic said. “When they double, there’s someone who’s going to be open. I’ve just got to read the game.”

With L.A. switching ball screens in the first half, Doncic ruthlessly picked on center Ivica Zubac, who was primarily defending Mavericks forward Dorian Finney-Smith. According to Second Spectrum, the Mavs averaged 1.43 points per play in pick-and-rolls with Doncic handling the ball and Zubac guarding the screener. Doncic had 15 points on 6-of-9 shooting with Zubac as the closest defender, according to ESPN Stats & Information.

The Clippers benched Zubac after the first five minutes of the second half and started trapping and doubling Doncic, holding him to one point in the fourth quarter.

“We won the game,” Doncic said. “That’s all that matters for me, if I have zero or 15 points in the last quarter.”

With the Clippers daring other Mavericks to beat them, Dallas’ role players responded. Finney-Smith and guards Jalen Brunson and Tim Hardaway Jr. combined to score 34 points on 12-of-15 shooting in the second half.

“When Luka gets going, I just try to stay ready, because I know they’re about to start trapping,” said Finney-Smith, who finished with 18 points on 7-of-9 shooting, including a corner 3 off a beautiful, cross-court feed from Doncic to give the Mavericks the lead for good with 2:50 remaining. “That’s when he gets to finding people, slinging the ball across the court, finding guys when we’re open. I just know they’re going to send two guys at Luka. You’ve just got to be ready to shoot.”

Hardaway, who had a sizzling finish to the regular season, had 21 points on 8-of-13 shooting. Like Finney-Smith, Hardaway’s eyes lit up when the Clippers committed to sending two defenders at Doncic.

“When that happens, just be aggressive,” Hardaway said. “Make the easy play. Hit singles at that aspect of the game.”

Dallas took the series lead despite center Kristaps Porzingis, the team’s second-leading scorer this season, being held to 14 points on 4-of-13 shooting. Kawhi Leonard primarily defended Porzingis, preventing the Mavericks from using him much in pick-and-roll actions with Doncic and taking him out of the offensive flow.

Porzingis did get a couple of dunks in the fourth quarter, with both coming off ball movement after the Clippers doubled Doncic on the perimeter, including the dagger that put the Mavs up five with 59 seconds remaining.