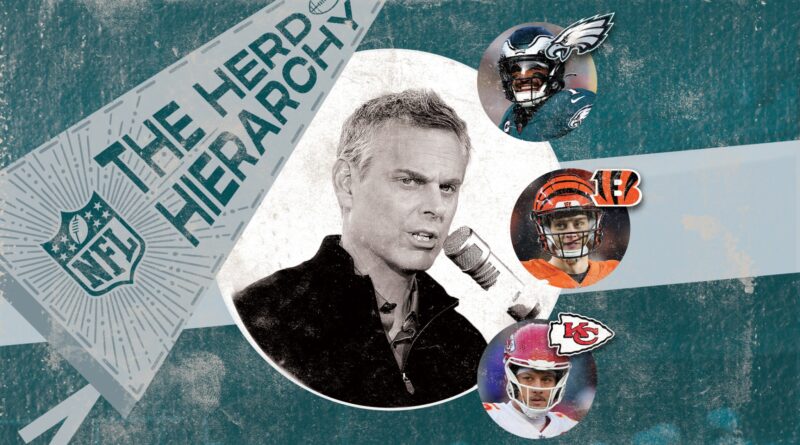 The 2022 NFL regular season is nearing the homestretch. With that in mind, Colin Cowherd‘s “Herd Hierarchy” is beginning to solidify itself.

Where do the Kansas City Chiefs stand after losing to the Cincinnati Bengals last week? Where do the Dallas Cowboys lie after trouncing the Indianapolis Colts? Are the Philadelphia Eagles the team to beat?

Here is the “Herd Hierarchy” heading into Week 14, with insights from FOX Bet.

Colin Cowherd is back with his top 10 NFL teams heading into Week 14.

Colin’s thoughts: “I’m gonna take the Seahawks for two reasons: the offensive line and Geno Smith. This is an offensive league, and he is No. 2 in the NFL in passer rating. I kinda know what I get from their quarterback every week. That was it. They also are second in takeaways. They’re a little young. You worry about them peaking. Can they hit the wall? But they’ve won five of seven, and they’re winning these close games, which is harder for young teams.”

Colin’s thoughts: “This is still one of the top five coaches, a great defensive front. They do have a bad point differential because they can’t blow you out offensively, but [Ryan] Tannehill had a bad game, a bad week. This is still a really good team that’s gonna win their division. They’re gonna have a home playoff game. We love [Mike] Vrabel. We like their defense. They just got boat-raced by a really good team on the road. It happens. I still trust the organization.”

Colin’s thoughts: “They’ve won nine of their last 10 games. They beat the Jets. They probably shouldn’t have, but they keep winning games. At some point, W’s matter. Their defense is not very good. You can move the ball on this team. Though, they did keep the Jets late in the game out of the red zone. At some point, W’s matter, and they just keep winning most of these close games.”

Colin’s thoughts: “We got to be fair here, they were missing their tackles against the best defense in the league. Tua still leads the NFL in passer rating. It was Tua’s first loss on the year when he’s healthy. He also had three turnovers against the Niners, and he has very few turnovers all season. This was a Sunday where the circumstances on the road, you start trailing, you have to throw, you’re missing your left tackle, you’re missing your right tackle. Miami is still going to be a playoff team, capable of winning a playoff game or two.”

Colin’s thoughts: “They’ve got weapons everywhere. They’ve got a remarkable run game. They have the No. 1 scoring defense. They forced four turnovers. Miami doesn’t turn the ball over. They forced four out of Miami and, by the way, say what you want about Brock Purdy: Kyle Shanahan has never asked his quarterbacks to be [Joe] Burrow or [Patrick] Mahomes. That’s not what they ask their quarterback to be. … I think they’re gonna win a lot of games, including playoff games with Brock Purdy.”

Colin’s thoughts: “They’re playing very, very well. Forty points-plus in three of their last five games. They’ve got six or seven great, world-class athletes. CeeDee Lamb’s having a season. Tony Pollard’s emerged as a star running back. There’s a lot to like about Dallas. I worry about the margins in the playoffs where you have to have great play from your quarterback, you have to have a great coach, but they lead the NFL in sack differential. They protect their quarterback, and they go get yours.”

Colin’s thoughts: “They’re back, and they’re back because they have now built a more consistent run game. They’re now the No. 1 seed, which is an advantage when you play in Buffalo with that weather. [They’ve gained] 130-plus rushing yards in six straight games. It’s not about Josh Allen. I said it all year when I doubted them. You’ve got to develop a run game before the playoffs. You’re going to be playing in windy, snowy, wet weather. You can’t rely on Josh Allen to throw it 45 times.”

Colin’s thoughts: “We said they’d be productive without Tyreek [Hill], they would score a lot of points, but he is lightning, and he did force double teams. And he does tilt the field, and they don’t offensively feel quite the same. Very reliant in key spots on Travis Kelce. Also outscored by Joe Burrow in the fourth quarter. I like Kansas City a lot. I think they can win the Super Bowl. But the Tyreek situation now as the season goes on, everybody gets film, what can JuJu Smith-Schuster do, what can’t he do?”

Colin’s thoughts: “Do you realize that Joe Burrow has only been sacked five times over the last four games, and at that same time they’ve developed a run game? The offensive line has finally come together. You don’t get to Burrow, you don’t hit Burrow, and Burrow’s got a run game. Watch out. [They] don’t even have Joe Mixon back. The key to this thing, not that Burrow’s better, it’s the offensive line has come together. He’s not getting hit, he’s not getting sacked, and now he’s throwing on second-and-5 and third-and-2. That’s what beats Kansas City.”

Colin’s thoughts: “They’re blowing people out. If you go look at Super Bowl winners the last 10 years, they always have like seven or eight blowouts. Philadelphia, I bought in this weekend; I was on the fence. After they blew out Tennessee, I’m in. A.J. Brown has been one of the great acquisitions of the year. They can beat you over the top, they can beat you [in] time of possession. I think the improvement of Jalen Hurts is unbelievable … If you go look at this kid in the biggest games this year against Tennessee and Minnesota, he’s giving you 300 yards throwing; he’s giving you 74% completions.”