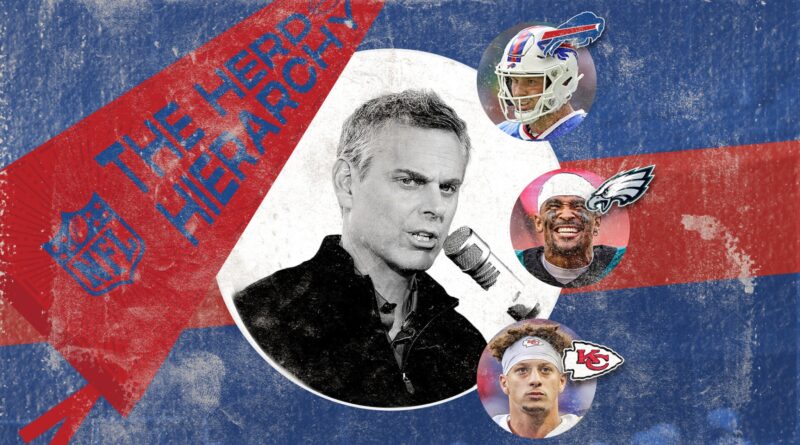 After Week 3, just two NFL teams remain unfettered in their perches among the league’s finest.

The Miami Dolphins and Philadelphia Eagles are the only squads who have yet to sustain a blemish to their records, and although they’re perfect record-wise, plenty of competitors have cases to trounce them in the weekly power rankings.

“The Herd” host Colin Cowherd thinks highly of both squads, but is his belief enough to place them at atop his latest top 10 list? Here’s this week’s “Herd Hierarchy,” with insights from FOX Bet.

Colin’s thoughts: “Don’t sell your Minnesota Vikings stock. They have the Saints and the Bears coming up. They’re going to get really, really healthy. Their only loss came on the road to the Eagles, and a lot of people think the Eagles are the best team in the league.”

Colin’s thoughts: “I have them lower than everybody else. I think they’re sloppy. … They are missing their center … Cam Akers fumbled again at the goal line. Is Allen Robinson II washed? He can’t get open. Van Jefferson is out another month and a half. Now, Matthew Stafford has a lot of picks, but he also leads the NFL completing 72% of his throws. … So you get the penthouse and the outhouse.”

Colin’s thoughts: “The Bucs are going to be really good. They’re just not healthy. Here’s how you know the Bucs are good: No. 1 scoring defense in the NFL, and the most takeaways. So the side that [Tom] Brady doesn’t play for is nails. … If they were healthy, they would’ve beaten the Packers.”

Colin’s thoughts: “The Niners’ offense has two three-and-outs all year. The whole season, with Trey Lance and [Jimmy] Garoppolo. … The lowest percentage in the NFL. Also, their defense is the only in the league holding people to four yards per play. They are stacked defensively, stacked at weapons. Do not love their offensive line, and Trent Williams is out. I would put them like No. 3, but right now their offensive line is in flux. … This is a Buffalo-level roster.”

Colin’s thoughts: “Bengals got right, we predicted it. They’re fine. They’ve run more offensive plays than anybody in the league, they’re top 10 in scoring defense. Joe Burrow last two games: Four TDs, no pics. Now, they’ve got to run the ball better, and they’re still making too many mistakes. But again, we’re going to learn a lot about this team this week because they host the weary, tired Dolphins, then it’s the Ravens. So maybe I’m a little high on them … but they feel right to me.”

Colin’s thoughts: “I’ll give the Dolphins credit: only remaining undefeated AFC team. Here’s the thing about Tua [Tagovailoa]: Last 12 games, the Dolphins are 11-1. They’re winning games. What do I always say: You’ve got to be productive as a quarterback — I don’t care what it looks like — and you’ve got to win games.”

Colin’s thoughts: “I thought they outplayed Miami. Their defense is struggling, but a lot of that is on the backend — they’ve got kids. But they have the No. 1 scoring offense in the league. They have 12 offensive TDs. … They get into the end zone. Also, who leads the NFL in passer rating? Their quarterback, Lamar [Jackson]. So, they’re scuffing on the back end of their defense, that’s why I can’t make them a top-3 team.”

Colin’s thoughts: “Most of that loss to the Colts was special teams. It was a disaster. They muffed a point, they missed an extra point, they had a fake field goal not work, they missed a 34-yard field goal. That’s why they lost the game. But they have 10 offensive touchdowns. Only the Ravens and Lions have more. They have the best sack differential, so they’re getting to the other quarterback. They’re fine. They had a really bad special teams Sunday, and it happens.”

Colin’s thoughts: “No. 1 total offense. They’re converting almost 49% of their third downs. Jalen Hurts is hard to defend. They move the sticks, they pick up first downs, keeping your quarterback off the field. Here’s the other thing I like: Jalen Hurts leads the NFL in passing yards per attempt. So don’t tell me he’s throwing underneath and playing it safe. He is throwing it down the field. … This is a big play offense.”

Colin’s thoughts: “Listen, they’ve won 20 of their last 28 games by blowouts. They’re the Mike Tyson: Don’t have much of a jab, but if you’re not prepared, it’s over in the second round. They’ve gained 77 first downs. They have the best point differential, they have the best passing offense. I don’t love their offensive line, and they are too Josh Allen-centric, but my eyes tell me that’s the best looking roster in the league, with an unbelievable quarterback.”