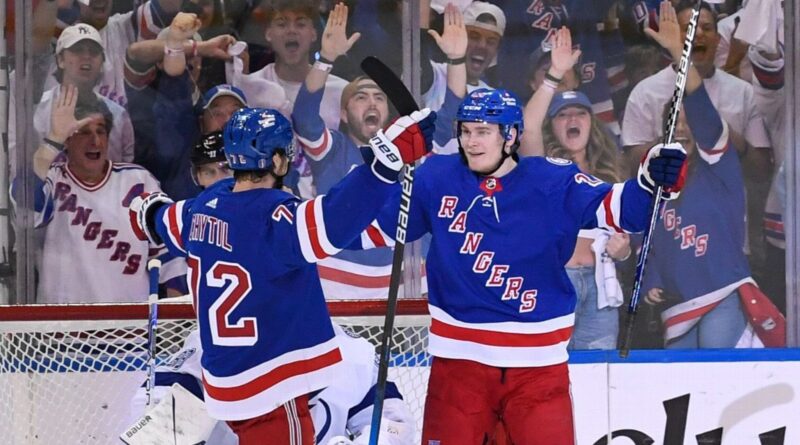 The Tampa Bay Lightning entered their Eastern Conference finals matchup against the New York Rangers after a well-executed sweep of the Florida Panthers and as a well-rested team, getting nine days off between series.

Two games into this series, the Lightning have failed to execute offensively, looking rusty and out of sync against a Rangers team that has found its stride after two straight seven-game battles. New York routed the visiting Lightning 6-2 in Game 1. While Game 2 was closer, the Rangers were able to play at their tempo and kept Tampa Bay on its heels during a 3-2 victory at Madison Square Garden to build a 2-0 series lead.

“We’ve been a tough out so far,” Rangers coach Gerard Gallant said. “I think we’re a good hockey team. We’ve played great hockey in the playoffs. We find a way to win games.”

As the action moves to Tampa, Florida, for Sunday’s Game 3, here are five takeaways from a stunning opening to the series, as the Lightning have gone from surging toward a three-peat to fighting for their playoff lives.

The Rangers are for real

We’ve seen this before in the Stanley Cup playoffs, haven’t we?

Teams that find their identity during a postseason journey. Teams that “learn how to win” during adverse moments, such as the Rangers bouncing back from a triple-overtime loss and a 3-1 series deficit to beat the Pittsburgh Penguins, or rallying from 2-0 and 3-2 holes to upset the Carolina Hurricanes. Teams that suddenly fit together the way their general managers had planned, either by getting healthy at the right time or through the right line combinations, such as the Rangers’ much-hyped Kid Line.

The past four games the Rangers have played have been the four best games they’ve played in the playoffs. They’re possessing the puck and buzzing the offensive zone. They’re getting balanced scoring from multiple lines and multiple defensemen. When their systems break down and opponents get their chances, goalie Igor Shesterkin has been phenomenal: a .946 save percentage, not giving up more than two goals in those four games, while the Rangers averaged five goals per game.

“We heard all year that we weren’t going to have playoff success. But the belief in the room is high. The outside opinions don’t affect anyone,” defenseman Adam Fox said. “I don’t think the outside noise or any perceptions of our team really affects our mindset going into the games.”

The streak is over

Since 2020, the Lightning had been able to rely on one thing consistently: If they lost a game in the playoffs, they were going to win the next one. They did it three times in the first round against the Toronto Maple Leafs. They did it 18 straight games overall in the postseason, setting an NHL record. Goalie Andrei Vasilevskiy was 18-0 with a 1.49 goals-against average, a .942 save percentage and five shutouts during that remarkable run.

The Lightning lost Game 1 to the Rangers. And then they lost the streak in Game 2.

“At some point, you’re gonna lose two in a row in the playoffs. The fact that we haven’t in how many years is remarkable. You could take a second here and say, ‘Hell of a job, boys.’ But for the most part, streaks come to an end, and it came to an end for us tonight,” Lightning coach Jon Cooper said. “Did it knock us out of the playoffs? It did not. Do we have a hill to climb? There’s no question. I don’t think I’m being Captain Obvious saying that. But I do think that we have better in us.”

There were some good things the Lightning could draw from in their Game 2 loss. It was a much tighter game than the 6-2 loss in Game 1. They got back to what makes them effective — north-south offense, turning defense into offense and earning their zone time — during the second half of Game 2.

But that magic elasticity of bouncing back from losses wasn’t there for the Lightning or for Vasilevskiy, who has given up three goals in all four games he’s played after a loss in these playoffs.

“There were some positive signs about what happened in the second half of the game. But there are no moral victories here. We still lost,” Cooper said.

When it comes to young defensemen in the NHL, it’s Cale Makar’s world and Adam Fox is just living in it, despite beating out the Colorado Avalanche wunderkind for the Norris Trophy last season. Makar is having an incredible postseason, setting scoring records for defensemen and now helping to hinder the otherworldly offense of Connor McDavid, one reason Fox’s playoff run hasn’t gotten the attention it deserves.

Fox has 22 points, putting him among the Rangers’ scoring leaders. He has fueled their power play, running an active point that keeps that unit in seemingly constant motion. He was averaging 26 minutes, 41 seconds per night entering Game 2. The Rangers try to trot him out for big defensive assignments, such as against Nikita Kucherov in the Eastern Conference finals, and he can handle them.

Seriously, look at this move to set up Kaapo Kakko’s goal in Game 2: deking Jan Rutta into the Bronx before sending a perfect pass to Kakko for the tip-in. It’s been a special run for Fox. Maybe not Makar special, but special nonetheless.

Since 2020, no NHL player has more postseason goals than Lightning center Brayden Point, who has 30 tallies in 53 games among his 60 points. He suffered a lower-body injury against the Maple Leafs in the Lightning’s Game 7 win, leaving after just 5:51. They didn’t need him in their second-round sweep over the not-ready-for-prime-time Panthers. But they miss him dearly against the Rangers.

“He’s, in my opinion, one of the best players in the league. I don’t think I’m out of line saying that. He’s a big-game player and he can help tilt the ice,” Cooper said. “In a perfect world, we’d love to have him back, but it’s not like we haven’t won a playoff series without him.”

Point has been skating after Lightning practices in full gear, working on getting back into game shape and sharpening his skills for a potential return. Having Point back would allow the Lightning to reset their lineup at the center position, but more importantly it would add one of the best two-way players in the game to their roster.

A (lopsided) goalie duel for the ages

On paper, the battle between Lightning goalie Andrei Vasilevskiy and Rangers goalie Igor Shesterkin was every bit the superstar matchup as Nathan MacKinnon vs. Connor McDavid in the Western Conference finals. Vasilevskiy staked a claim for “best goalie in the world” status after back-to-back Stanley Cups, last postseason’s Conn Smythe Trophy, the 2018-19 Vezina Trophy and leading the NHL in wins for five straight seasons. Shesterkin was the challenger to that throne, expected to win his first Vezina this season and backstopping the Rangers through two seven-game series wins.

Before the series, Shesterkin said his Russian countryman Vasilevskiy was “the best goalie in the world right now.”

And now, after two games of stellar goaltending and a sold-out Madison Square Garden crowd chanting, “Igor’s better!” during these wins?

“Currently, I don’t think that really matters. I still stand by my opinion,” Shesterkin said through an interpreter. “Andrei is still the best goalie in the world. You can’t forget that the series is to four wins.”