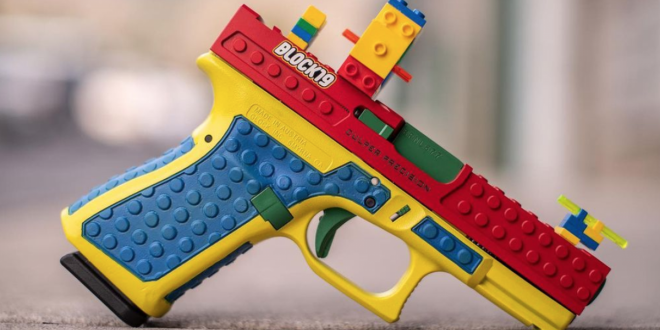 Encrusting a Gun With LEGO Does Not Change Hearts and Minds, but It Does Attract Lawyers

We’ve learned the hard way that certain toxic mixtures trigger such foreseeable harm that they should never have made it past the drawing board. Medical advice and Lysol. Marjorie Taylor Greene and Facebook. Cops and surveillance toys. In that vein, today we learn what happens when LEGO bricks merge with Glocks: Lawyers come knocking.

LEGO has sent a cease-and-desist order to a Utah-based custom gun company for “Block19,” which, according to the Instagram promotion, brings “one of those childhood dreams” to life. On June 24th, the company Culper Precision explained the motivation behind its lethal arts and craft: “We wanted the second amendment to simply be too painful to tread on, so there was only one logical solution.”

They gleefully reveal that they just glued some LEGO on there, and they stuck pretty good: “We superglued it all together and surprisingly it survived a little over 1500 rounds in full auto at Shootah this past weekend!” Another advertised perk is the ability to build additional LEGO creations onto the gun’s body, a classic adult pastime.

Before the company removed the gun from its website, the Guardian reports, it marketed the firearm for $549 to $765, well above its average Glock price tag.

The gun also reenforces Second Amendment rights, somehow, they argue, in a blogpost following widespread criticism. “We are sick of the past 30-40 years of slowly capitulating our rights away in the fear of what someone who hates us for exercising our 2nd Amendment rights thinks about us,” they wrote. They added that they released Block19 to liberate gun owners from the “fear of the loud voices on social media,” to show that guns are “for EVERYONE,” that Block19 steps closer to making guns “the great unifier.”

The Gun Violence Archive has found that in 2020, gun violence killed or injured 5,137 teens and children—a spike from an already-horrifying 3,818 teens and children in 2019 and 3,547 in 2018. By comparison, FBI data shows that 47 law enforcement officers were killed by guns in 2019. Research by the Children’s Defense Fund found that from 2008 to 2017, guns killed twice as many children under age five than law enforcement officers on duty.

Yet while manufacturing guns to look like toys is against federal law, customizing and owning a toy-disguised gun is legal, the Washington Post reported. Earlier this year, North Carolina law enforcement claimed to have found a gun disguised as a Nerf alongside 20 other firearms. The owner wasn’t charged for the gun but possession of mushrooms and cannabis.

Gun violence has spun so far out of control in the U.S. that, in 2019, Amnesty International issued a travel advisory for visitors to exercise “extreme caution” because gun violence now amounts to a human rights crisis.

Related gun accounts that Culper Precision tagged on its Block19 post seem to be thinking along the same lines. A Toy Story gun (“for portfolio purposes only”). A Nintendo gun. A gun plausibly inspired by Toys R’ Us. Storm Trooper gun? A gun in front of a Marvel logo.

Culper Precision also tagged LEGO on Instagram, perhaps bringing the item to the company’s attention, if not a wave of disgusted gun control advocates. In a statement to Gizmodo, LEGO declined to comment on the marriage of fatal weapons and their toys, but that they’ve asked Culper Precision to stop promoting the Block19. “We have contacted the company and they have agreed to remove the product from their website and not make or sell anything like this in the future,” it said.

While most commenters on the LEGO gun post applauded Culper Precision for lighting the internet on 🔥🔥🔥, others didn’t quite see how gluing LEGO bricks on a gun makes a pro-Second Amendment statement. “I support the second amendment, but this looks too much like a toy,” one wrote. “Is no one worried about a kid killing himself or others with it?”