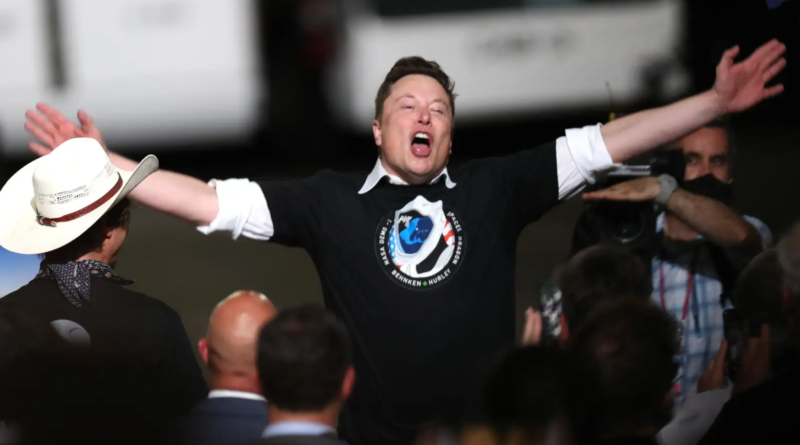 Despite the fact that Elon Musk’s acquisition of Twitter is basically the real-life equivalent of the “this is fine” meme, we just can’t look away. A train wreck in slow motion, it feels like we’re all paying witness to some horrible, once-in-a-lifetime spectacle, sorta like glimpsing the Hindenburg explode. From firing key executives that were probably keeping the platform afloat, to mangling the blue check mark, to spooking advertisers and alienating hordes of users, the Musk man has truly outdone himself this time. Here are some of the highlights from the last two weeks (yes, it’s only been two weeks) since Elon sealed the deal on his Twitter acquisition and began swiftly burning the global tech platform to the ground before our very eyes.

Conquerer Elon, mighty warrior from bullish billionaire clan, lover of doges, builder of cars, theoretical tunneler in the Earth. One day he did crest an internet hillock and spied—there, in yonder vale—an acquisition worthy of Elon’s line: Kingdom Twit of vast Bird-land. With his arrayed army of capital he did charge down and stake a claim. What did mighty conquerer Elon do first upon storming castle Twit? Why, lay low his enemies roughly! No mercy. Goodbye, fair Parag. Goodbye brave Segal. And Gadde, and Edgett. Goodbye mighty Twit executives. Here comes Elon, conquerer fantastic, brilliant mind and strong with ideas and money aplenty, to bring to Kingdom Twit a mighty new era of everlasting prosperousness!

ELON DURING A RECENT CONFERENCE CALL: Hey gang, soooo I just spent the GDP of a small nation on a major tech platform that also happens to be a global cess pool for misinformation and propaganda. I’ve also made vague rhetorical gestures to the fact that bots are bad and have said I’d clean this place up when I took over. So, uh, yeah, what do we think is the most effective way to do that? Hmm…ban parody accounts, you say? You mean the accounts that everybody knows are fake and therefore don’t pose any sort of informational threat to anybody? That’s interesting. Is there any way this is both ineffective and counterproductive to our espoused “freedom of speech” goals? It’s not? Oh, okay. Yeah, let’s do it. Let’s do it right now. [Warning: This is, in fact, a parody]

Q: According to the New CEO Handbook, if you’ve just spent a ton of money on a really bad deal to buy a big company, how do you recoup your losses?

While the New CEO Handbook is not a real book, I do imagine Elon having read something similar, since it really seems like advice he got from…somewhere. It was initially reported that Musk wanted to lay off as much as 75 percent of the Twitter workforce—an announcement that naturally freaked out workers at the company. Musk later backtracked on that figure but still decided that he’d be firing about half of the workforce, or some 3,700 employees. In other countries, layoffs were even worse. Musk reportedly fired as much as 90 percent of the social media company’s workforce in India. Hey, when you’re deeply in debt ($13 billion, to be exact), ya gotta cut corners somewhere, right?

Some People Who Were Fired Get Immediately Invited Back, Say ‘No Thanks’

Some People Who Were Fired Get Immediately Invited Back, Say ‘No Thanks’

After realizing that he might actually need one or two employees to run one of the largest companies in the world, Musk apparently decided to beg a few of the people he’d fired to stick around. Their response? Some people were amenable but others were like eff off, buddayyyy.

As Twitter goes down in a ball of Musk-induced flames, Twitter users have apparently realized that there’s actually a better, less toxic social media alternative that they could’ve been using all this time. While it’s unclear yet whether the trend will continue, mass defections from the bird app to Mastodon see the Fediverse favorite growing its user base by leaps and bounds. The active number of regular users on Mastodon recently hit 1 million, though the platform is thought to have somewhere around 3 million total users.

Introducing: $20 for a Blue Check Mark…or $8…or Whatever

Introducing: $20 for a Blue Check Mark…or $8…or Whatever

Probably the biggest, weirdest disaster so far has been Musk’s cruel assassination of the blue check mark. After promising to bolster Twitter’s efforts against bots and disinformation, Elon kicked things off last week by kneecapping the platform’s current verification system. In what seemed like it had to be a trollish joke, he announced that the coveted blue check mark would begin to cost $20 per month. After much outcry, he dropped the price to $8—which is still a batshit rate for something that was free less than a month ago. Since then, Twitter has rolled out a number of overlapping and redundant verification systems that have only continued to confuse users. All of this has culminated in the events of this past week, when the pay-to-verify method resulted in a swell of fake verified accounts for public figures and celebrities. Imposters spawned fake verified accounts for George W. Bush, Rudy Giuliani, Joe Biden, and even Twitter itself, all of which tweeted out a spew of obscene nonsense.

Gray Check Mark passed away on Wednesday, Nov. 9, 2022, surrounded by angry software engineers and millions of bewildered platform users. It’s sad to see a product feature go so young. Designed to be a free verification method for government accounts, commercial companies, business partners, major media outlets, and publishers, Gray Check Mark was not with us long! Young and feisty and eager to assist with Twitter’s suddenly incomprehensible verification efforts, Check Mark was actually born only several hours before it died. It will be remembered for its redundancy as a feature, its odd pallor, and its unyielding optimism in the face of a totally incoherent product strategy. But hark! Late Thursday night, it seemed to return, though for whom and for how long are unclear.

Elon Admits Twitter Is Losing a Lot of Money

Elon Admits Twitter Is Losing a Lot of Money

Yes, spooked by what appears to be an insane captain taking over a multibillion ship, advertisers have apparently begun to pull their support from the bird app, meaning that its revenue streams have begun drying up. At the same time, Musk also saddled the platform with a ton of debt, meaning that the company is in real trouble. Of course, Twitter’s Complaint Hotline Operator blames these problems on “activists,” apparently:

As Musk’s changes to the company have ushered in a wave of chaos, a number of high-level executives decided to quit this week. Twitter’s top cybersecurity executive, Lea Kissner, as well as its chief privacy officer, Damien Kieran, chief compliance officer Marianne Fogarty, and head of trust and safety Yoel Roth have all resigned within the last day or so. As the platform struggles to deal with Musk’s incoherent verification strategy, he now has few people to rely upon for help (since he fired everybody).

Given the amount of global chaos one boyish billionaire and a boatload of cash can cause, it’s not exactly surprising that the U.S. government might be somewhat concerned about the recent shenanigans at Twitter. The Biden administration has occasionally expressed concern about how Musk’s actions could affect the broader political situation around the world, according to recent reports.

On Thursday, the Federal Trade Commission, not exactly the agency you want on your bad side if you’re a business, similarly made it known that they were monitoring the situation: “We are tracking recent developments at Twitter with deep concern. No CEO or company is above the law, and companies must follow our consent decrees,” the agency said in a statement to the Washington Post on Thursday. It’s easy to forget given everything that’s been going on lately but Twitter was already in deep shit before Musk bought it. In addition to being under a 20-year consent order with the FTC due to security lapses way back in 2011, Twitter also still has its security scandal from this summer hanging over its head. Remember all the revelations provided by the whistleblower Peter Zatko, aka “Mudge,” Twitter’s former security chief? Because of the allegedly seedy organizational decisions that were already being made at Twitter before this terrible new Musk chapter, the FTC is now keeping a very close eye on the tech giant. Suffice it to say, with Elon’s takeover and his immediately terrible security/privacy/verification decisions, he must be making the agency exceedingly nervous. “Our revised consent order gives us new tools to ensure compliance, and we are prepared to use them,” the agency said ominously, in its statement to the Post Thursday.

Elon, watch out! You don’t want the feds in your rear view mirror, my friend.