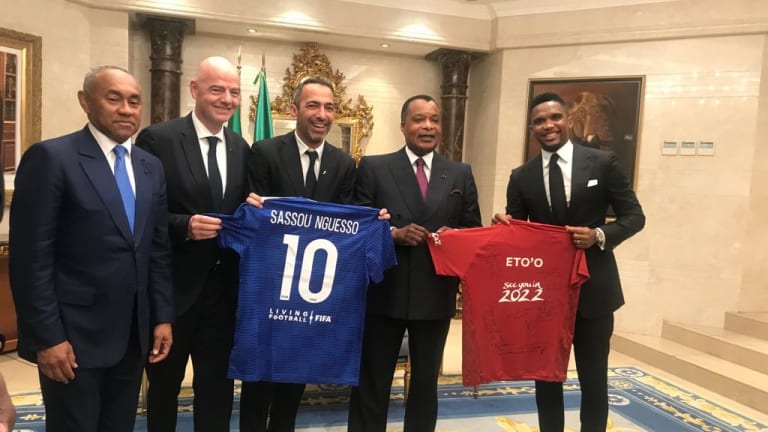 Today in Lubumbashi, Democratic Republic of Congo (DRC), the FIFA President visited the site of TP Mazembe’s new football stadium, which will be able to hold 50,000 fans, and the club’s youth academy. Infantino and the delegation were greeted by TP Mazembe fans, including the fan brass band who sang and danced for the delegation as they toured the sites.

The group had the opportunity to see several classes in action and paid a surprise visit to young footballers studying biology and French. They also observed a class dedicated to helping children who have difficulties reading and writing.

A press conference then took place where the FIFA President informed members of the media about FIFA’s plans to support and develop football in the DRC and Africa. He spoke about three specific pillars: refereeing, infrastructure and competitions, as well as FIFA’s plans to develop these hand in hand with CAF and the African football stakeholders.

The first pillar, refereeing, will create a professional and elite group of African referees who will be independent of administrative and political bodies. This follows on from CAF’s last Executive Committee meeting at which a decision to implement reforms in the refereeing sector was approved.

The second pillar, infrastructure, will see FIFA mobilise companies and entrepreneurs to gather around USD 1 billion with the objective of building at least one stadium that complies with FIFA’s standards in each African country.

The third pillar, competitions, focuses on developing new and better competitions to generate more revenues so that the African clubs can retain talented players.

The FIFA President mentioned the possibility of creating an African League that would see the best clubs from the continent play against each other and the organisation of regional competitions and youth tournaments to further help the development of young players in Africa.

Speaking at the press conference, FIFA President Infantino said: “What I want, what FIFA wants and what football needs is to see African football shine. We want to bring it to the highest of heights and show the world the outstanding talent and amazingly gifted players your continent possesses. To do this, we want to implement a three pillar approach: refereeing, infrastructure and competitions. In close cooperation with CAF, the 54 member associations across Africa and other stakeholders, I am positive that we will make African football reach the top level where it should be because the quality and potential are definitely here.”