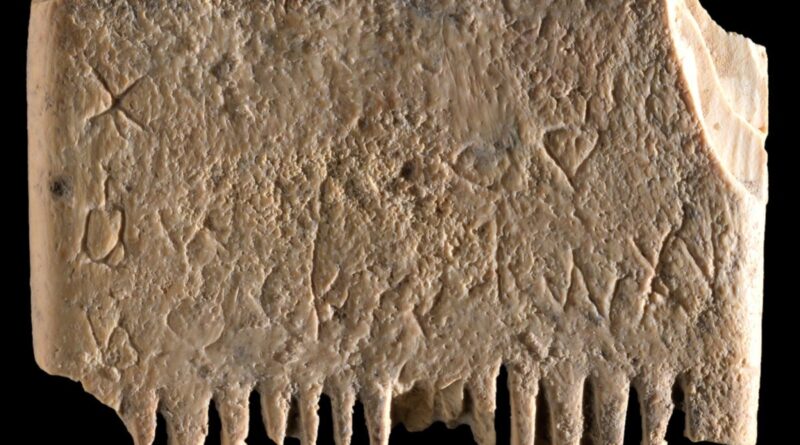 Archaeologists in Israel say they have found the first-known written sentence in Canaanite, an alphabet used by the long-ago inhabitants of the region and until now lost to time.

The sentence—comprising 17 Canaanite characters, totaling seven words—was incised on an ivory comb carved from an elephant tusk. It says: “May this tusk root out the lice of the hair and the beard.”

The comb was found on the site of Tel Lachish, a Bronze Age settlement about 25 miles from Jerusalem. It’s about 1.38 inches by 0.98 inches, though its teeth have long since broken off. Details of the script’s characters and meaning were published today in the Jerusalem Journal of Archaeology.

“This is the first sentence ever found in the Canaanite language in Israel,” said Yosef Garfinkel, an archaeologist at the Hebrew University of Jerusalem and a co-author of the study, in a university release. “There are Canaanites in Ugarit in Syria, but they write in a different script, not the alphabet that is used till today.”

In an email to Gizmodo, Garfinkel added that the comb was likely made in Egypt and then brought to Tel Lachish, where a local inscribed the delousing plea.

According to Garfinkel’s team, the comb’s markings are the first entire sentence written in the Canaanite language, one of the first known alphabets. (The Sumerians and Egyptians had even older scripts.)

Now an Israel Nature and Parks Authority site, Tel Lachish was a lively city center for about 600 years, from 1800 BCE to 1150 BCE. The comb was discovered during 2017 excavations, but the lettering was only noticed this year.

Like many modern lice combs, the Levantine comb had teeth on both sides. One set of teeth was thicker, to untangle and sort out larger bunches of hair. The other set was much finer, likely to pull lice and their eggs out of the hair.

Happily for the comb’s owner, the tool was doing its job. Under a microscope, researchers found the remains of head lice on the tool’s second tooth. If you didn’t feel close to the past seeing ancient Canaanite writing, perhaps the chitinous membrane of a Bronze Age louse will push you over the line.

Canaanite inscriptions, but not full sentences, have been found before. At Tel Lachish, archaeologists have found 10 inscriptions so far (including the comb), more than any other site in Israel.

Time will tell what other ancient writing is waiting to be found. Perhaps there’s a Canaanite equivalent of the old Sumerian bar joke—preferably with the punchline intact.

More: 3-Foot-Long Sword Discovered Off Israel’s Coast Dates Back to the Crusades