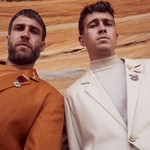 Change is in the air for Flight Facilities. The Australian purveyors of chill poolside vibes have lately been bumping up energy on recent songs like “The Ghost” and Channel Tres collaboration “Lights Up.” In a statement, they share: “Subconsciously, a decade after releasing early 80’s inspired disco, our internal musical clocks have us creating early ‘90s inspired dance.”

New single “Move,” featuring Chicago duo Drama, isn’t just inspired by the ‘90s — it’s a whole time machine back to when house music ruled the Billboard dance/club charts, buoyed by the voices of divas like CeCe Peniston, Crystal Waters and Martha Wash. Drama’s Via Rosa is less roaring and more vocally reserved here, but the thumping bassline, sweaty drums and swelling piano melodies bring all drama (no pun intended) on their own. The “Move” music video is a throwback as well, with silhouetted dancers and big, bright shapes in the background that recall Peniston’s “Finally.”

“Whether you’re in the club, kitchen or a lockdown party of 1,” Flight Facilities say, “‘Move’ is our ode to piano house, and the pioneers of 909 drum-machine music.” — KRYSTAL RODRIGUEZ

Grab your keys and strap on your Drive jacket, Feed Me just dropped a dreamy synthwave wonder of scorpion-jacket proportions. It’s a brilliant taste of the UK producer’s next chapter as he continues to broaden his music horizons, exploring tasty sounds and styles outside of his drum’n’bass roots. “Reckless” features gorgeous, airy vocals from South African singer-songwriter Tasha Baxter, and it marks the first single from a forthcoming album by the same name.

“‘Reckless’ is a lockdown story reimagined as escapist fantasy, and a chapter in a diary of recalibration,” Feed Me Tweeted. “Next week’s album is a segment of a larger body of work totalling how I made use of the time you’ve all given me.”

Get ready to submerge yourself in pastel rainbow and neon hues. “Reckless” is out now on Sotto Voce Records. — KAT BEIN

Jorja Smith, “All of This”

Heartbreak finds a hip-swaying rhythm on Jorja Smith’s new single “All of This.” The UK crooner spiritually and sonically travels down to South Africa for a Guilty Beatz-produced beat inspired by Amapiano, an offshoot of South African house music. Smith’s pain-stricken vocals float over the winding, melancholic production, which takes center stage mid-way through with a barrage of deep and heavy, almost militant percussion — a seamless and sudden transition, like that of sadness morphing into betrayal and anger. “So much for my one and only,” she repeats with a sweet venom.

In a statement, Smith says that she met Guilty Beatz while attending a writing camp. “He’s so wonderful to work with and when we initially started the song, it was more a fall to the floor type beat,” she adds. “He’s shared Amapiano playlists with me before and then during the first lockdown in 2020, he sent me a version of the song like it is now. … It’s all about someone who doesn’t deserve you and thinking wow, you really had all of my once, ew.” — K.R.

We all went to a party or a dinner or a friendly gathering in 2020 that turned into our last for a year at least. It’s wild, because we didn’t know it would be our last at the time. It’s kind like when Parisian duo Point Point put out “Serious Mood” in 2017 and then didn’t release anything else for four freakin’ years—until today.

“Seeyaanotherday” is a triumphant, funkalicious, disco-drip of a return. It’s sensual and sunny, a syncopated rhythm dressed in walking bass and silly-little synth noises guaranteed to put a smile on your face and a bend in your back. The sounds are warm, organic and playful, and the single is celebrated with a fresh and clean Instagram page that seems to promise more to come. This time when they say “Seeyaanotherday,” we hope they mean it. — K. Bein

Following releases on Local Action and Nothing Else Matters, NYC producer Baltra has returned to Shall Not Fade with his first full EP for the UK house label in two years. Comprising four jewel-toned tracks, Dreaming of a Disco travels from the beach to the club and back again. By its title alone, “Sunset Jam” is an appropriate closer. Lush and languid at the start with rippling xylophone keys, it slowly ups the energy with searing disco strings, scat singing and a simmering acid synth line finale to guide the sun over the horizon. The perfect track for an impromptu beach party, “Sunset Jam” is balmy, sensual and ready to lead listeners from day into night. — K.R.

Party Favor, “Save Me”

After a year in quarantine, a false-spring of a post-vaccination emergence and the promise of more Delta-variant lockdowns on the horizon, we’ve all come to be close friends with anxiety. It’s not the best feeling in the world, but at least we have moving music to get us through tough times, especially when those tunes come with wonky lil’ synth bleeps like Party Favor’s bassy, bouncy single “Save Me.”

“‘Save Me’ is an ode to the demons we’re all fighting constantly,” Party Favor is quoted in a press release. “Everyone’s going through something different all the time, and for me, that’s dealing with anxiety. This song comes from the perspective of a person’s subconscious mind trying to rid itself of those demons, even when they keep coming back time and again.”

It’s been a couple years since Party Favor released new solo material. He did have a fantastic run last year with Nitti Gritti on their collaborative Sidepiece project, earning a Grammy nomination for their “On My Mind” single alongside Diplo. Party Favor just signed with Ultra Records, so there’s a lot of new solo work to come. Keep an eye peeled. — K. Bein