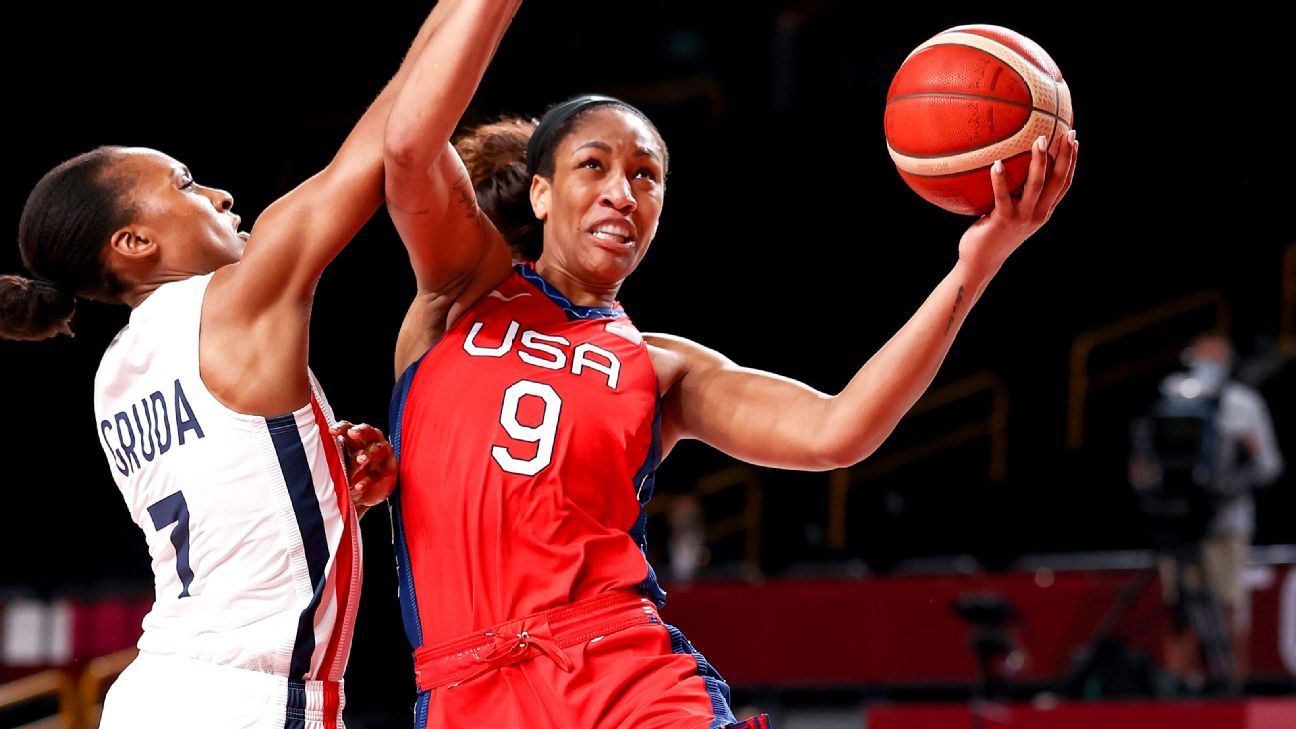 Just like that, our pool days are behind us. Team USA dominated in the water throughout these Olympic Games. Now we turn our attention to the track … and the court … and the pitch … and the floor.

Oh, and Simone Biles will compete in the beam final.

The action rolls on Monday in Tokyo — Day 10 of these Olympic Games. The U.S. women’s basketball team is on to the quarterfinals, but the soccer team will not play for gold.

Here’s the latest and greatest:

The USWNT was dealt a blow in the first half when goalkeeper Alyssa Naeher left with a leg injury. Naeher was a rock star in goal in the quarterfinal match against the Netherlands.

In the second half, Canada got all of one shot on goal. The Canadians made it count. After being awarded a penalty kick, Jessie Fleming scored the game’s lone goal and sent Canada to the gold-medal game.

Canada converts the penalty to take the lead. #TokyoOlympics pic.twitter.com/r856yMXjIb

.@MCJR__ said ZOOM to the rest of the field. 💨@usatf x #TokyoOlympics pic.twitter.com/9YbHpAUHQ5

Team USA baseball has reached the knockout stage and is playing Japan, the top seed in the tournament.

A’ja Wilson led the way for Team USA with 22 points and six rebounds during a 93-82 win over France in the final game of the group stage. Wilson made 9 of 12 shots.

The U.S. finishes the group stage unbeaten and advances to the quarterfinals.

Read more: It’s a win, but USA is still out of sync

World champion and world-record holder Kendra Harrison of the U.S. is now an Olympic silver medalist in the women’s 100-meter hurdles. She finished the race in 12:52 seconds, taking second place by three-hundredths of a second.

After failing to qualify for the 2016 Olympics, Harrison has been working for five years to get to this point.

This is Puerto Rico’s second gold medal at the Olympics after Monica Puig’s gold in singles tennis in Rio 2016. — Aishwarya Kumar

April Ross and Alix Klineman advanced to the quarterfinals of women’s beach volleyball with a 21-17, 21-15 round of 16 win over Lidy Echevarria Benitez and Leila Martinez Ortega of Cuba. They will face Germany in the next round.

Micha Hancock still setting for U.S. Jordyn Poulter watching the match from a wheelchair on the sidelines. pic.twitter.com/3nT3xk7nRJ

The U.S. trailed 2-1 before rallying in the fourth set.

Sifan Hassan of the Netherlands tripped with one lap to go in a preliminary heat of the women’s 1500m but got back up to continue the race.

She ended up winning her heat to advance. #TokyoOlympics pic.twitter.com/gU536XvyHg

World champion Sifan Hassan made an incredible recovery from a fall at the final bell to win her 1,500-meter heat. Hassan picked herself up after getting in a tangle with Kenyan runner Edinah Jebitok at the start of the last lap. She sped around the outside of the pack on the back straight and ended up crossing the line first in 4 minutes, 5.17 seconds to qualify for the semifinals.

Miltiadis Tentoglou of Greece took gold in the long jump, followed by a pair of jumpers from Cuba — Juan Miguel Echevarria and Maykel Masso — for silver and bronze.

The only American to compete in the final of the long jump was JuVaughn Harrison, who finished fifth. He also competed in the high jump and finished seventh. He’s the first American man to compete in both at the Olympics since Jim Thorpe in 1912.

One of the primary themes leading into these games was athlete expression.

We’ve seen numerous examples already in Tokyo, and earlier today, Raven Saunders showed us another example on the podium. pic.twitter.com/VMAcKlKZTe

During the photo op at her medals ceremony Sunday night, shot putter silver medalist Raven Saunders of Team USA stepped off the podium, lifted her arms above her head and formed an “X” with her wrists. Asked what that meant, she explained: “It’s the intersection of where all people who are oppressed meet.”

She’s just Ilona from the block

Ilona Maher of Team USA Rugby Sevens is really into Jennifer Lopez. Like really. And J.Lo returned the love on Twitter.