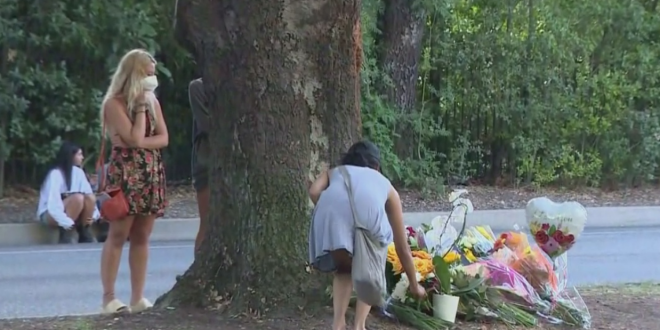 WESTLAKE VILLAGE (CBSLA) — A memorial was held on Sunday night for two people killed overnight in a fiery one-vehicle crash in Westlake Village. Loved ones gathered near the site of a deadly crash that friends said took the lives of Ryan Breaux and Ezekial “Zeek” Bishop on August 2. (Courtesy: CBS)

Deputies responded to a call of smoke in the area around 1:30 a.m. near Skelton Canyon Circle.

When officials arrived, the vehicle had been fully engulfed in flames and two occupants were pronounced dead at the scene.

The vehicle was severely damaged and hit a tree before getting cut in half on impact.

Several messages of condolences were shared on social media on Sunday after news of the crash’s reported victims, who some friends gathered nearby for a memorial told CBS2/KCAL9 were singer Frank Ocean’s teen brother Ryan Breaux and classmate and school athlete Ezekial “Zeek” Bishop.

Amerian-Irish actor Pierce Brosnan’s son Paris Brosnan shared a series of photos and screenshots of old messages between himself and Breaux with the following caption:

“To my brother, who was talented beyond belief, possessed a heart of gold, had an energy that was infectious, a smile & laugh that lifted everyone’s spirit, and was a loyal and authentic friend to anyone he knew,” the post began.

“Thank you for being there for me when I needed you most, thank you for all the wild nights, thank you for your music and all the late night studio sessions with Fray, thank you for blessing us ALL with your presence on this earth. I will carry you in my heart always. Until I see you again brother. Ryan Breaux forever & Zeek Bishop forever.”

The coroner’s office has not yet officially confirmed the identity of the crash victims.

It was not immediately clear who was the driver or what caused the deadly crash, but authorities say it appears speed played a role.

Ocean, whose real name is Christopher Breaux, has not yet spoken out publicly regarding reports.