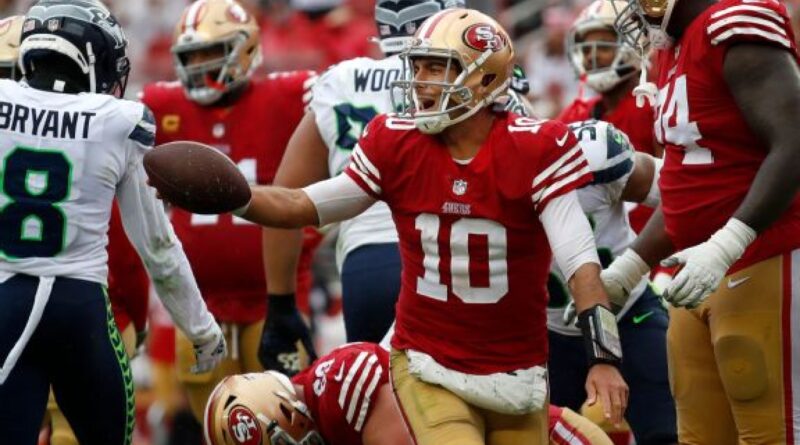 An exciting Week 2 of the NFL season culminates with a Monday night doubleheader. In the first game, the Tennessee Titans will play the Buffalo Bills, and in the second, the Minnesota Vikings will play the Philadelphia Eagles.

Week 2 was a wild ride for fantasy football managers. Amon-Ra St. Brown made history with his eighth consecutive game with eight-plus receptions for the Lions, tying Antonio Brown and Michael Thomas. Plus, Tua Tagovailoa was a standout with 38.8 fantasy points that included a Miami-franchise-record six touchdowns.

However, the biggest story from Week 2 involved Trey Lance. He was carted off the field in the first quarter of the San Francisco 49ers’ matchup against the Seattle Seahawks, forcing Jimmy Garoppolo to take over. The verdict was a broken ankle, so Lance will now be out for the season, and fantasy managers are left scrambling to replace him.

To that end, I have some QB suggestions for you, as well as players you should know about on the waiver wire at other positions. While some of these players can help your fantasy football teams right now, others are stashes — players who might not be deployed into your lineup in Week 3 but who could have the potential to do so in the near future. The bye weeks are just around the corner, so they’ll serve as useful depth options as well.

With that in mind, let’s take a look at the recommended ESPN Fantasy waiver-wire adds for Week 3.

Jimmy Garoppolo, San Francisco 49ers (1.0% rostered in ESPN leagues): Well, if you’re looking to replace Lance, let’s start in the obvious place. Before Sunday’s game, Garoppolo didn’t expect to get any on-field reps, but that’s exactly what he got for most of the 49ers’ 27-7 win. Last season, he averaged 16.0 fantasy points per game, making him a solid streamer for fantasy managers. And don’t forget that with Garoppolo at the helm, the 49ers have been to a Super Bowl and last year’s NFC Championship Game. In other words, this season’s expectations certainly won’t be lowered with the forced QB change.

Carson Wentz, Washington Commanders (56.7%): I have to mention the Commanders quarterback again this week. Wentz has completed 65.5% of his passes for 650 yards and seven touchdowns in two games so far in 2022. He has not only kept the Commanders in both games but also has brought them back from deficits. Wentz can be viewed as a high-end QB2 with upside.

Marcus Mariota, Atlanta Falcons (9.3%): Mariota is a very good option for deeper leagues or for fantasy managers in superflex or 2-QB formats. In two games, he has averaged 16.7 fantasy points and has demonstrated the ability to lead the Falcons’ offense. Mariota is on the streaming radar thanks to having Drake London, Cordarrelle Patterson and Kyle Pitts as his top offensive playmakers.

Jared Goff, Detroit Lions (6.8%): The Lions have scored 71 points over the first two weeks, including a touchdown in every quarter. Goff is surrounded by an upgraded offensive line and a plethora of receiving playmakers. Through two games, Goff has averaged 20.7 fantasy points, and it looks like he will have plenty of productive games this season. He’s a great QB2 for fantasy managers. Minnesota is up next in Week 3.

Raheem Mostert, Miami Dolphins (51.7%): Mostert is looking like the starter for the Dolphins after he finished with 14 touches for 79 total yards in a win over the Ravens. Chase Edmonds, who signed the second-largest contract among free agent running backs during the offseason, had only six touches for 41 total yards. Mostert also had a higher snap percentage than Edmonds. Don’t overcomplicate it. Both running backs will be involved in the Dolphins’ backfield, but it’s Mostert who should be picked up in all leagues.

Eno Benjamin (4.0%) and Darrel Williams, Arizona Cardinals (3.6%): James Conner missed almost all of the second half against the Raiders on Sunday. He has a history of ankle issues. Benjamin (11 touches) and Williams (10) formed a committee after Conner left, with both finishing the game with a similar number of touches. The backfield could be split evenly if Conner misses time in Week 3 against the Rams with Kyler Murray also getting his share of rushes. Benjamin and Williams are both on the radar in deeper PPR formats.

Tyler Allgeier, Atlanta Falcons (14%): Allgeier made his professional debut on Sunday against the Rams with veteran running back Damien Williams placed on IR due to a rib injury. It was a solid performance from him, tying Patterson (10) for the team lead in rushing attempts. Allgeier played on only 31% of the offensive snaps, but he has the potential to be a league winner based on his collegiate production. In Allgeier’s last two seasons at BYU, he ran for 2,731 yards and 36 touchdowns.

Quick hits: Tyrion Davis-Price played on nearly as many snaps as Jeff Wilson Jr. but wasn’t nearly as effective running the ball with his 14 rushing attempts. The 49ers running back is rostered in only 4.5% of leagues but may be worth a stash. … J.D. McKissic continues to be prioritized in the Commanders’ passing game. He’s on the flex radar for fantasy managers in deeper formats. McKissic has averaged 10.5 fantasy points per game this season and is rostered in only 42% of leagues.

Treylon Burks, Tennessee Titans (58.7%): Burks led the team in targets and receiving yards against the Bills on Monday. The Titans pulled their starters at the end of the third quarter, but Burks ran just as many routes as Robert Woods. He has the potential to be a difference-maker for the Titans this season. Burks is on the flex radar against the Raiders in Week 3.

Russell Gage, Tampa Bay Buccaneers (55.1%): Since Mike Evans has been suspended for this week, Gage could play a key role against the Packers, especially if Chris Godwin or Julio Jones is unavailable. His route participation climbed from 63% in Week 1 to 82% in Week 2. Since 2020, Gage has averaged 15.6 fantasy points in games in which he has been targeted at least six times.

Nelson Agholor, New England Patriots (0.6%): Agholor had his best game with New England on Sunday, seeing significant time in the slot and also on the outside. He finished with six receptions for 110 yards. Agholor’s TD reception from QB Mac Jones had a completion probability of only 26.2%, according to Next Gen Stats. It was the third-lowest completion probability on any Jones touchdown thus far in his career. The connection between Jones and Agholor, which was reported to have improved during training camp, seems to have translated to regular-season wonders. In Week 3, Agholor has an excellent matchup against a Ravens secondary that was just destroyed by Tyreek Hill and Jaylen Waddle.

Sterling Shepard, New York Giants (10.2%): Shepard had the most targets (10) against the Panthers on Sunday and was second in snaps among Giants wide receivers. There is no “true No. 1 receiver” in New York, so it would be wise to keep an eye on the practice reports to better understand who is generating the most buzz. That said, it will probably continue to be Shepard. The Giants host the Cowboys in Week 3. For his career, Shepard has averaged 6.2 targets and 11.0 fantasy points per game against Dallas. He’s a great option for fantasy managers in deeper formats.

Liz Loza is optimistic about Sterling Shepard’s performance in Week 2 and his potential as a flex player in PPR leagues.

Michael Gallup, Dallas Cowboys (44.2%): Gallup will return to the Cowboys’ lineup in Week 3 after finishing up his rehab on the torn ACL he suffered last season. He will be welcomed by a Dallas offense that is struggling at the WR position. CeeDee Lamb has caught only 9 of 22 targets for 104 receiving yards and has yet to score a touchdown. Gallup could see plenty of targets against the Giants in Week 3 as Dalton Schultz deals with a knee injury.

Noah Brown, Dallas Cowboys (0.8%): OK, how ’bout them Cowboys? Brown’s rapport with quarterback Cooper Rush was on full display on Sunday against the Bengals. This duo signed onto the Cowboys’ roster back in 2017. So far this season, Brown has been the team’s most productive receiver. Between two quarterbacks, he’s caught 159 yards and a touchdown on 14 targets. Brown appears to be in great shape heading into Week 3 against the Giants secondary.

Greg Dortch, Arizona Cardinals (2.8%): Dortch has been the Cardinals’ most consistent offensive contributor so far. Through two games, he has averaged 6.5 targets and 14.4 fantasy points. When Rondale Moore returns from his hamstring injury and DeAndre Hopkins returns from his suspension, Dortch could lose value. In the meantime, it appears he’s on the flex radar. Marquise Brown will battle it out with Jalen Ramsey in Week 3, leaving Dortch to see favorable coverage.

Logan Thomas, Washington Commanders (19.5%): From Week 1 to Week 2, Thomas’ snaps and routes both increased. He caught 3 of 5 targets for 37 yards and a touchdown on Sunday against the Lions. Wentz has had a ton of success in his career with big receivers and bigger-bodied tight ends. In Week 3 against the Eagles, Thomas could be very productive as Samuel, Dotson and Terry McLaurin, should, ahem, command a great deal of attention from opposing defenses. Look no further if you need an upgrade at TE.

Evan Engram, Jacksonville Jaguars (16.6%): Engram led the Jaguars in targets (eight) and receptions (seven) with a route-participation rate of 85%. He’s a reliable target of QB Trevor Lawrence, who has a lot of receiving playmakers to target each week. That’s why Engram will have some low statistical outings in certain weeks. Even so, 12 targets over the first two weeks of the season is a great sign. In Week 3, Engram is a very good option against a Chargers defense that has had trouble defending tight ends. Ideally, he should be paired with another tight end for fantasy managers to implement a matchup-based “committee” approach.

Quick hits: Tyler Conklin has averaged 8.0 targets and 10.8 fantasy points per game through two games. C.J. Uzomah’s eventual return from a hamstring injury could negatively impact his target share. Conklin is rostered in only 1.8% of ESPN leagues. … Hayden Hurst has accumulated 15 targets through two games. Hurst could succeed in the middle of the field with opposing defenses trying to take away Ja’Marr Chase and Tee Higgins.