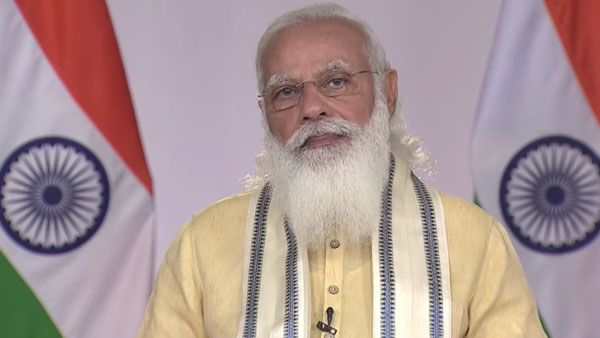 New Delhi, June 07: Prime Minister Narendra Modi said that vaccines is our only armour against COVID-19.

During his address to the nation, the PM said that in the days to come, the vaccine supplies would be increased. There are 7 companies that are producing vaccines. Three more vaccine trials are at the advance stage. There is also a nasal vaccine in the making, the PM also said.

The PM also said that the government decided to vaccinate the health care workers first. Could you imagine what would have happened had they not been given the vaccination. They are able to help the people only because they are vaccinated, PM Modi also said.

The PM also said that the Centre is taking back control of vaccination from states. He said starting June 21, Centre will provide free vaccines to the states. This will be implemented in the next two weeks, the PM also said. When we opened the vaccination for the states to vaccinate those in the age group of 18-44, many questions were asked.

He said that the Centre will buy 75 per cent of the total vaccine production from manufacturers and give it free of cost to the state government apart from bearing the responsibility of 25 per cent of the work related to vaccination with the states.

Initially, there were questions raised on why the Centre is controlling the vaccination drive entirely.

Many ran campaigns against our policy as well. From May 1 onwards we decided to hand over 25 per cent of the vaccination work to the states. Many states tried implementing this and learnt what the difficulties were. The same people who questioned us began saying that the earlier system was a better one.

Hence, now it has been decided that the responsibility to vaccinate is being taken back by the Centre.

In the next two weeks, the Centre and States would work on the new guidelines. The states will not have to spend on the vaccines. Free vaccination will be given to all above the age of 18 years, the PM said.

The PM also said that people should stop spreading rumours about the vaccination. He urged people not to do this and instead encourage people to get vaccinated.

He said that the fight against the second wave of COVID-19 is on. Many have lost their loved ones and my thoughts and support is always with all the people.

He said that for 100 years, the world had not seen a pandemic of this proportion. A lot of work has been done such as increasing ICU beds, creating new healthcare infrastructure. In April and May the demand for oxygen shot up and never has there been such a demand in India of this proportion. To ensure that the supply was put back in place we went on a war footing in which our armed forces also pitched in.

In 2014, when we came to power, the vaccination coverage in the country was just 60 per cent. It normally takes 40 years to vaccinate the entire population. Under Mission Indradhanush, we took up the vaccination programme and in five years, we increase the vaccine coverage from 60 to 90 per cent, the PM also said. This mission was taken up because we concerned about the poor and our children.

The demands for vaccination shot up due to COVID-19. In one year we launched two made in India vaccines. We showed the world that we are not behind anyone. As I am speaking to you, I can tell you that 23 crore people have already been highlighted.

I was confident that our scientists would make the vaccines in a short period of time. When they were preparing the vaccines, we put our logistics in place. Last April when there were fewer cases, we set up the vaccine task force, the PM said. The manufacturers of the vaccines were support fully by us when it came to funds, clinical trials, research and development, the PM said.