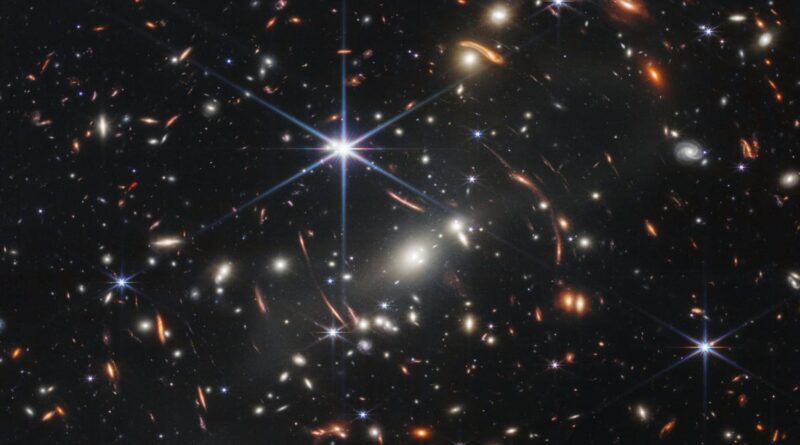 In a news conference Monday evening, NASA officials, President Biden, and Vice President Kamala Harris revealed the first full-color image from the Webb Space Telescope: a breathtaking shot of deep space stretching back over 13 billion years, the first in a set of images to be released this week of the telescope’s first cosmic targets.

The image depicts SMACS 0723, a galactic cluster that magnifies deeper space behind it from Earth’s perspective, making it possible to see some of the earliest light of the universe.

“America’s defined by one single word: possibilities,” Biden said in the press briefing held at the White House.

In a release today, NASA confirmed that Webb is fully ready for science; all 17 ways of operating the telescope’s instruments are in working order and the spacecraft is fully commissioned. That announcement is being celebrated with the release of Webb’s first full-color images.

“One hundred years ago, Mr. President, Madame Vice President, we thought there was only one galaxy,” NASA administrator Bill Nelson said. “Now, the number is unlimited.”

The biggest of screens
This massive TV uses intelligent TV Processing thanks to a 4K HDR Proeccesor X1 to deliver unparalleled visuals for your TV shows, films, and games, has an amazing array of colors to draw from, and grants access to a bunch of streaming services thanks to Google TV and Google Assistant.

The Webb team will release the rest of the images and spectra from the telescope’s other recent targets tomorrow. Those cosmic targets include the Carina and Southern Ring nebulae, the gassy exoplanet WASP-96b, and five galaxies clustered together about 290 million light-years away known as Stephan’s Quintet. At 1,150 light-years from Earth, the exoplanet WASP-96b is the nearest target imaged in Webb’s recent agenda. The deep field (as you might imagine) captures the most distant objects.

The deep field image is particularly intriguing because the Webb team capitalized on a quirk of spacetime to make it happen. Webb looked at a galaxy cluster called SMACS 0723, which magnifies the light behind it (from the position of Webb.) The Webb team effectively trained the most cutting-edge space telescope on a target magnified by the gravitational distortions of SMACS 0723 to see light from the early universe.

Though it may seem odd to some that Biden unveiled this first image, there’s a long history of presidents participating in aerospatial and astronomical events. President Kennedy famously announced the intention to send Americans to the Moon in 1963; Vice President Mike Pence did the same in 2019. As some of our readers speculated this morning, a president revealing the Webb image—or any space news, for that matter—may mean that more people pay attention to it.

The Hubble Space Telescope has imaged a few deep fields, but Webb will be able to see farther and in sharper detail. Webb only takes in light at the infrared and near-infrared wavelengths—which will allow it to see more ancient, redshifted light than Hubble, which mostly takes in ultraviolet and visible light.

Webb is not replacing Hubble (which has been in operation for over 30 years!) but is succeeding it. Webb is also much farther from Earth than Hubble, sitting about 1 million miles from us at an observation point called L2.

The image you see in this article and those revealed tomorrow all must be translated into visible light, with various infrared wavelengths assigned to different colors.

“[The] imaging community in astrophotography like to refer to this process as ‘representative color,’ instead of what it used to be called, [and] still many people call ‘false color images,’” Joe DePasquale, a senior data image developer at the Space Telescope Science Institute recently told NASA’s Gravity Assist talk show.

So, what it looks like: spell-binding, eye-opening—or perhaps just an ordinary space image, by your measure. But this is the beginning of what hopefully will be a long career for the telescope, one that will reveal to us whole new views of the universe.

Tune in tomorrow for the rest of Webb’s first images; they will be released beginning at 10:30 a.m. ET here.

More: First Webb Images Will Include Exoplanet Data and the Deepest-Ever Image of the Universe