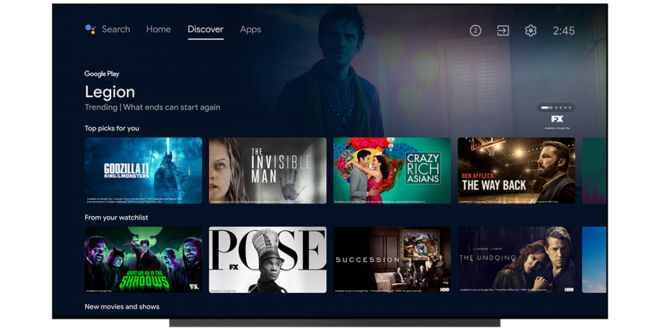 Since the release of Chromecast with Google TV, Google has been updating Android TV with a number of the fancier features available on its streaming TV dongle, and this week Google is bringing improved ways to suggest new content and save them for later.

The first update to Android TV is the addition of a built-in Watchlist, which can be easily viewed by hitting a new button on the details page. Shows and movies on your Watchlist will also appear in a new section within the Discover tab, and assuming you’re logged in properly, content on your Watchlist will be synced across your phone, laptop, and any other Android TV devices. And when you see something you want to save for later, adding new content to your Watchlist is as simple as long-pressing on the listing and hitting “Add to Watchlist.”

Meanwhile, following a similar update to Google TV late last year, Android TV as a whole is getting an improved recommendation system that allows you to rate a selection of shows and movies in order to suggest content you’re more likely to enjoy in the future.

You can access the new recommendation tuning system from Android TV’s settings menu or by hitting the “Improve your recommendations” card in the Discover tab, after which you’ll be presented with a show or movie and asked if you want to see “More like this” or “Less like this.” You should be able to rate as many shows as you like, with Android TV using your selections to automatically update its recommendations.

Finally, to make browsing through content a bit more immersive and interactive—similar to Netflix and other streaming video apps—Android TV will start playing trailers automatically (when available) when you hover on a piece of content. Of course, if this isn’t something you’re into, you can turn the feature off by going to Settings> Device Preferences> Home Screen and hitting the disabling the toggle for “Enable Video Previews.”

So while these probably won’t placate Nvidia Shield users who have become frustrated with the way Google surfaces ads in the guise of recommendations on Android TV, Google’s new updates should make it just a bit faster and easier to discover new content you’re more likely enjoy, or at least save it for later.

Google says the new update to Android TV will begin rolling out to devices starting this week.