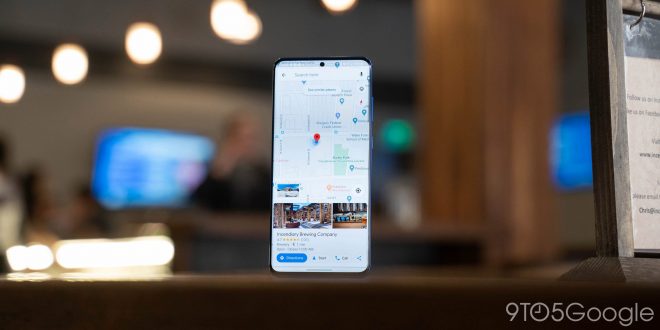 Following the Home app last month, one of the last first-party apps that needs a dark mode is Google Maps. Fortunately, the latest version of the Android client finally reveals that work is underway.

About APK Insight: In this ‘APK Insight’ post, we’ve decompiled the latest version of an application that Google uploaded to the Play Store. When we decompile these files (called APKs, in the case of Android apps), we’re able to see various lines of code within that hint at possible future features. Keep in mind that Google may or may not ever ship these features, and our interpretation of what they are may be imperfect. We’ll try to enable those that are closer to being finished, however, to show you how they’ll look in the case that they do ship. With that in mind, read on.

Google Maps does have a dark theme today, but only in the navigation mode when driving. That look applies directly to the map, as well as most of the UI — bottom sheet and various buttons. One odd exception is the white Google Assistant microphone icon in the top-right corner, and to a lesser degree the green panel up top that lists street names and directions.

Every other part of the UI has a bright background, while the map layer is mostly different shades of gray. Version 10.50 of Google Maps features several strings explicitly referring to a “DARK_MODE_SETTING.”

It describes a new “Appearance” menu in Settings where you’ll have three options: Default to device theme, Dark theme, and Light theme.

This preference will notably be independent of the navigation appearance:.

Various “night” assets and icons were also introduced with version 10.50.

Creating a dark map is likely a big effort and not as simple as inverting colors. Google Maps contains a multitude of street and place names, as well as various pins and icons. Everything needs to be optimized so that visibility is not impacted. Meanwhile, switching from white to Google’s standard dark gray hue for everything else should be more straightforward.

Hopefully, the Google Maps dark theme is coming sooner than later. We briefly saw a render with the launch of Android 10 last September, but that was before the big Maps redesign earlier this year.