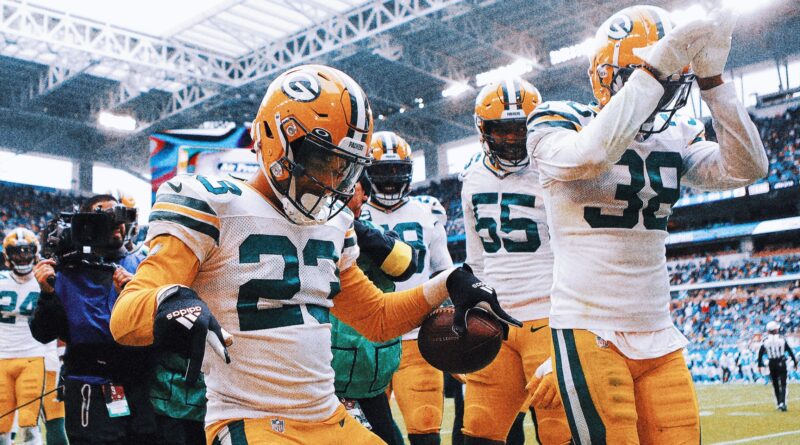 The Green Bay Packers are still alive in the playoff race, and it’s in no small part thanks to how their pass defense has played lately. Even in their loss to the NFL-best Philadelphia Eagles in Week 12, they only let up 137 yards through the air.

The Packers are giving up the third-fewest passing yards per game this season, allowing teams an average of just 192.4. But what’s really kicked it into high gear recently has been the takeaways. They’ve had three or more takeaways in two of their last three games. Against the Dolphins on Sunday, Green Bay managed four takeaways, three of which were interceptions. Their interception rate is the second-highest in the league, picking off 3.42% of passes thrown against them. That’s behind only the Pittsburgh Steelers and their 3.46% interception rate.

Nine of the 26 points Green Bay scored against the Dolphins came as a result of takeaways by the defense, including the go-ahead six points after the Packers intercepted quarterback Tua Tagovailoa three consecutive times in the fourth quarter.

Before their Week 14 bye, they recorded three takeaways against the division-rival Chicago Bears, two of which were late-game interceptions, the first of which sealed the contest for the Packers.

It’s worth noting the Packers only managed one interception on Rams quarterback Baker Mayfield in Week 15, but Mayfield had just 12 completions all night. There wasn’t a lot of opportunity because the defense shut the Rams down entirely, which is a good problem to have.

Further proof lies in Green Bay’s success rate on third-down defense. At first glance, they’re a top-10 team, allowing just a 37.65% conversion rate. But the amount of third downs they’ve faced is less than every other team in the league. The Packers have faced just 170 third-down situations on defense and that’s due to opponents’ success rate on first and second down. The Packers are 23rd in defensive DVOA on first down, 26th on second down. Translation: Teams don’t even have to get to third down when playing Green Bay, they’ve already moved the chains on first or second down.

Things are starting to look up, though. Green Bay is getting more pressure up front as of late, which is not putting as much stress on what was a relatively simple back-end scheme, perhaps to its own detriment. The Packers play a lot of two-high safety looks that utilize the varying skillset of Green Bay’s defensive backs primarily in zone coverage, whether Cover 2 or Cover 3 (with some quarters mixed in). The execution has marginally improved over the course of the season, even with losing defensive starters like Rashan Gary, to help up front, and most applicably, cornerback Eric Stokes. So has the usage of more creative coverages, like quarter/quarter/half (Cover 6 — don’t worry about it, it makes sense), and 2-man, in which the defense plays man coverage underneath with the same two-high safety shell. That’s an even more recent development.

“It seemed like we were getting a little bit more pressure up front on Tua, making him move out of the pocket,” said head coach Matt LaFleur on Sunday. “We knew he’s a guy that’s going to anticipate and he’s going to let the ball go. If you can read the quarterback the right way that also gives you some opportunities defensively. Our guys did a great job of that.”

‘This was special’ — Aaron Rodgers on the Packers’ win over Dolphins

The Dolphins were still able to eke out some explosive plays through the air, namely to Jaylen Waddle, who finished with just five catches that went for a whopping 143 yards. The Dolphins had four plays over 20 yards, two of which went to Waddle, including one of which was an 84-yard catch and run.

But the defense came up strong with takeaways when it mattered. They’re going to get another test this weekend against Kirk Cousins, Justin Jefferson and the Minnesota Vikings during which we’ll see if the defensive adjustments that were made will stick.

Carmen Vitali covers the NFC North for FOX Sports. Carmen had previous stops with The Draft Network and the Tampa Bay Buccaneers. She spent six seasons with the Bucs, including 2020, which added the title of Super Bowl Champion (and boat-parade participant) to her résumé. You can follow Carmen on Twitter at @CarmieV.