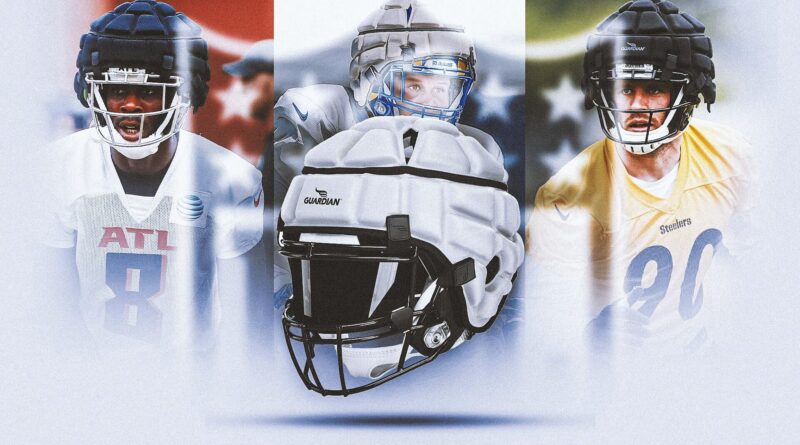 The NFL‘s newly mandated Guardian Caps have certainly made a fashion statement — and raised a lot of questions — as training camps get underway across the country.

The Guardian Cap is a soft, oversized outer layer of padding meant to be worn around the outside of a player’s normal helmet, like a shell.

The cap is required to be worn by all offensive linemen, defensive linemen, linebackers and tight ends from the start of training camp through the second week of preseason games in an attempt to curb concussions suffered by players.

Before the Guardian Cap mandate, which passed in March, the NFL reported 30 concussions per year during preseason practices for the past three years (2019-21) and 45 concussions for two consecutive seasons before that (2017-18).

The Guardian Cap results in at least a 10% reduction in severity of impact if one player is wearing it and a 20% reduction in impact, at minimum, if two players in a collision are wearing it, according to the NFL.

Many NFL head coaches across the league have expressed the importance of having their teams wear the Guardian Caps during training camp in an effort to prioritize player safety.

Players are mostly in support of the new helmet caps, as well.

“They’re a little heavy, but if they’re going to make us safe, I’m all for it,” Denver Broncos linebacker Bradley Chubb told USA Today. “I know guys around the league all have to wear them, so it is what it is. … It’s all good with me if it gets us to the season and knocks down concussions. It’s all good.”

Here are some highlights of players sporting Guardian Caps around the league:

Atlanta Falcons tight end Kyle Pitts, who is entering his second season in the NFL, was making one big play after another while donning the Guardian Cap and taking snaps from new quarterback Marcus Mariota.

Eight-time Pro Bowler and Super Bowl champion Aaron Donald went all out at the Los Angeles Rams’ training camp in Irvine, California, and the Guardian Cap wasn’t slowing him down.