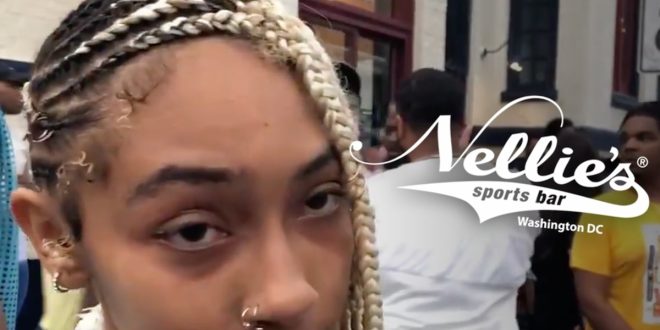 The Black woman dragged from a Washington, D.C. bar by her hair says management has A LOT more work to do to be good in her book … starting with contrition, and a heart-to-heart on race.

Keisha Young‘s attorney, Brandon Burrell, tells this publication … his client feels she was singled out, in part, because of her skin color. She alluded to this during her on-the-street interview, saying she felt profiled when the rationale that surfaced for the brutal dragging was …. she “fit the description” of someone who’d broken the rules Saturday night in Nellie’s Sports Bar.

To Keisha and co. … this reeks of racial profiling, despite the fact that the guard who pulled her out was Black himself. Her suspicion here is that, he and the security team at large, were under strict orders, which Keisha feels helped put a target on her back — and protesters outside the bar seem to agree.

That leads us to what Keisha wants now, and — as you’d imagine — Burrell says, first and foremost, the bar owners and upper management need to apologize to her directly.

Keisha Young, 22, of Md., says she was the woman seen being dragged out of Nellies in that viral video on IG. When I asked her what should happen next, she said, “I want them gone”. (@wusa9) pic.twitter.com/ZkwxnSWZqU

We’re told their statement simply wasn’t enough to right their wrongs … and they didn’t even bother addressing Keisha by name. Not just that, but we’re told the Nellie’s team hasn’t spoken to her personally since the incident.

Beyond that, Burrell says Nellie’s needs to seriously look at itself in the mirror … and honestly discuss how they’re treating patrons who are BIPOC. And BTW, we’re told that if they want Keisha in on that conversation, she’s more than willing to come to the table.

Now, at Nellies, everyone inside is leaving. @DCPoliceDept is going inside. A lot of activity at 9th and U right now for a lot of reasons. (@wusa9) pic.twitter.com/k0ALT5HEwH

As for how Keisha’s doing … we’re told she’s mentally shaken up and, physically, suffered bruises — but Burrell says they’ll be getting official word from doctors on her prognosis. It sounds like they’re ramping up to sue.

Oh, and Keisha’s team hasn’t forgotten about the guard himself — we’re told they want him prosecuted, and plan to file a police report soon.