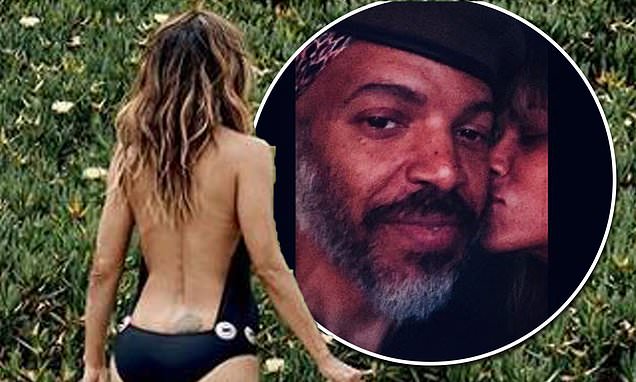 Halle Berry, 54, shows off her age-defying physique in a backless black swimsuit on the beach… after confirming romance with Grammy-winning singer Van Hunt, 50

By Connie Rusk For Mailonline

Halle Berry sent temperatures soaring as she shared a sexy swimsuit snap on Instagram on Saturday.

The actress, 54, showed off her age-defying physique in a backless black swimsuit as she hit the beach.

It comes after Halle confirmed her new romance with Grammy-award winning singer Van Hunt, 50, by sharing a series of Instagram snaps.

Wow factor: Halle Berry, 54, showed off her age-defying physique in a backless black swimsuit as she hit the beach on Saturday

In the sizzling beach photo, the Catwoman star was facing with her back to the camera. The swimsuit, which featured shell embellishments on the hips, hugged Halle’s peachy posterior while showing off her leggy frame.

Halle wore her brunette tresses in soft waves over her shoulders and complemented her beach wear with a large straw fedora hat. She simply captioned the shot: ‘Back at the beach’.

Her followers rushed to the comments section to praise her incredible figure.  One fan wrote: ‘I wanna be like you when I’m 54’, while another added: ‘That’s a berry nice view’. A third chimed: ‘Goals…thank you for the inspiration!!’.

It comes after Halle confirmed her new relationship with Van as she took to Instagram to post a picture of herself donning a t-shirt with the musician’s name emblazoned across it and tagged him in it.

Like Berry, Hunt has garnered critical acclaim in his field, winning a Grammy in 2007 for best R&B performance by a duo or group for his work on a cover of the Sly & the Family Stone song Family Affair.

The A-list actress last month hinted she was seeing someone, writing, ‘sunday, funday’ alongside a shot of her feet mingled with a mystery man’s – which are now known to be those of her new beau Van.

The latest: Halle confirmed her new relationship with Van as she took to Instagram to post a picture of herself donning a t-shirt with the musician’s name emblazoned across it

The Cleveland native again shared a shot of their feet last month as she showed her gratitude for birthday greetings after she turned 54 on August 14.

The Bruised star and director wrote at the time: ‘Waking up Vegas! Thank you for all the beautiful birthday wishes from my friends and my very supportive and loyal fans! You ALL helped to make my birthday extra special.’

Halle is a mother-of-two, to daughter Nahla, 12, with ex Gabriel Aubry, and son Maceo, six, with ex-husband Olivier Martinez.

The actress has also previously been married to Eric Benét and David Justice.

She’s got style: The Academy Award-winning actress rounded out her ensemble with a paperboy cap

The Catwoman star this past April appeared on an Instagram Live stream with her friend Lena Waithe, talking about her love life and parenting amid the early days of the COVID-19 shutdown.

‘I’ve learned a lot being with my children,’ she said. ‘They are the best company for me right now, and when I divorced Maceo’s dad I’ve been pretty alone by myself going on three years now. Decidedly so, for sure.

‘I have decided to take time. I’m very much a relationship-oriented person, I always want to be with someone. But I decided, no I’m going to slow my roll, I’m going to take a minute and I’m going to spent time with me. And it’s been so great that I think I might stay like this!’

Sparks flying: The A-list actress last month hinted she was in a new relationship, writing, ‘sunday,funday’ alongside a shot of her feet mingled with a mystery man’s