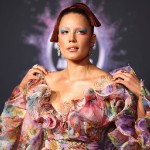 Halsey is turning her nightmares into art with the NFT series “People Disappear Here,” she announced Friday (March 12).

The series will be released on Nifty Gateway, a marketplace where some of the biggest NFT collectors have congregated, on Wednesday, March 17. The collection breathes life into animations of seven characters from Halsey’s original “People Disappear Here” painting soundtracked to eerie music, as well as the digital animation of the full original painting. The original physical “People Disappear Here” artwork, which was hand-painted and signed by the Manic singer, will be up for auction.

“The characters are all inspired by figures that occurred in a series of sleep paralysis nightmares I had at home during the quarantine. After seven years of bed surfing hotel rooms around the world, adjusting to my own pitch black cave in California had a little bit of a learning curve,” Halsey said in a statement. “From toddler TV programming evil dentists, a child born with massive claws who scratched her way out of the womb, to a woman who stood at the foot of my bed and demanded I watch her masturbate. They were memorable to say the least. I’m excited to be sharing them in a space that prioritizes artist integrity, and in a market that perpetuates the value of intellectual property.” Halsey

She joins the likes of Grimes, Shawn Mendes, Kings of Leon and many more artists who have been selling their digital collectible works as NFTs, or non-fungible tokens, that exist exclusively on a blockchain. NFTs are popular among people interested in cryptocurrency, but the phenomenon has quickly grown into a mainstream norm within the music industry.

Halsey’s NFT collection marks the first time her visual art has been available for sale to the public. She painted the cover of her New York Times best-selling poetry book, I Would Leave Me If I Could, and in September 2019, she released a time-lapse video of herself painting a larger-than-life version of her Manic album artwork with “Graveyard” playing in the background.

Part of the proceeds from Halsey’s “People Disappear Here” NFT collection sales will benefit My Friends Place, which assists and supports homeless youth in LA, and Carbon 180, which is dedicated to building a world that removes more carbon than it emits.