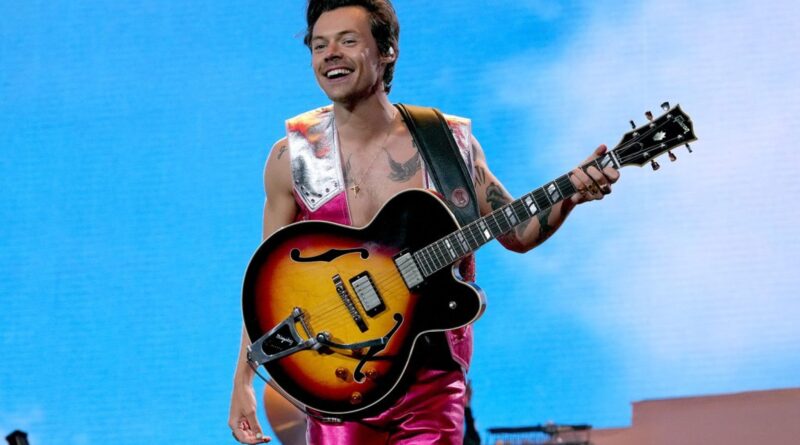 Malone scores a No. 2 debut with “Twelve Carat Toothache,” for his third successive U.K. Top 5 appearance.

Harry Styles performs on the Coachella stage during the 2022 Coachella Valley Music And Arts Festival on April 22, 2022 in Indio, Calif.
Kevin Mazur/GI for Harry Styles

Harry Styles checks back into top spot on the U.K. albums chart with Harry’s House (via Columbia), while Post Malone has the week’s highest debut with Twelve Carat Toothache.

As it lifts 2-1 on the Official U.K. Albums Chart, Styles’ third studio album becomes the first title this year to score a second week at No. 1.

The highest number of unique leaders in a calendar year stands at 43, the charts company reports, a record set in 2020.

Styles’ return to the summit comes as the European leg of his Love On Tour shows kicks off at Glasgow’s Ibrox Stadium, and, with “As It Was” completing a 10th week atop the singles survey, he bags another Official U.K. Chart double.

Two evergreen albums climb the survey this week, due to concert activity. ABBA’s Gold: Greatest Hits (Polydor) lifts 9-7 in its 1,049th week on the chart, following the launch of the pop act’s ABBA Voyage in London, while Queen’s Greatest Hits (Virgin) improves 18-8, after the rockers’ performance at the Queen’s Platinum Jubilee concert. Now led by Adam Lambert, Queen is taking its Rhapsody Tour around the country. The band’s 1981 hits collection has just brought up 1,000 weeks on the chart.

Finally, Kate Bush’s extraordinary return to the charts with “Running Up That Hill” (Rhino) is now spilling into the U.K. albums survey.

Powered by its inclusion in season four of Netflix’s Stranger Things, “Running Up That Hill” lifts to No. 2 on the Official U.K. Singles Chart this week, for a new peak position. At the same time, the English singer’s career retrospective The Whole Story explodes 57 places to No. 19 on the Official U.K. Albums Chart.