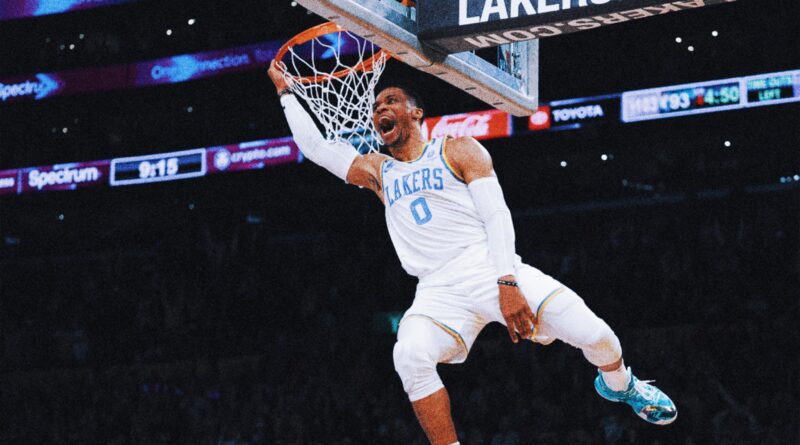 Russell Westbrook and the Los Angeles Lakers seemed to be on the brink of a breakup just a couple of months ago.

The former MVP struggled mightily in his first season in the Purple and Gold, posting some of the worst numbers of his career as the Lakers missed the playoffs with a 33-49 record.

However, after months of being the center of trade speculation, Westbrook has seemingly turned a corner, accepting a role coming off the bench, and now averaging 15.9 points and 7.9 assists as a reserve.

On Thursday, Skip Bayless said he sees it as a miracle that Westbrook has been able to turn things around this season and credited Lakers’ rookie coach Darwin Ham for helping redefine Westbrook.

“The rebirth of Russell Westbrook is as shocking to me as how bad he was last year,” Bayless said on “Undisputed.” “He was a top 75 [all-time player]. He’s obviously a slam dunk Hall of Famer … and he was the MVP. Last year, I’ve never seen a great player fall so far so quickly as he did. It was one day after another.

Westbrook’s play off the bench has coincided with the Lakers’ recent turnaround, in which they’ve gone 9-6 following a 2-10 start to the season. As Westbrook has grown to potentially become a pivotal player again, questions about his future in Los Angeles aren’t focused on just which trade package the Lakers should move him for, but also if the Lakers should consider keeping the former MVP.

Shannon Sharpe wonders if the 34-year-old Westbrook even wants to remain with the Lakers beyond this season.

“I feel Russ is accepting this role with the Lakers,” Sharpe said. “I still think his key goal is to be a starter somewhere if someone gives him similar money and the chance to start. I know he loves being home. He’s from the LA area. He’s home, the kids, the wife, he’s very family-oriented. He gets to go home every game and see the wife, see the kids and see the family. But I think deep down inside him, he thinks, ‘I’m a starter. I still can start in this league and I know I can.'”

But at this point, Sharpe believes that Westbrook has almost become too important to the Lakers in his new reserve, saying that it’s also allowed Anthony Davis to have a resurgence this season, too.

“I’m very impressed that he swallowed his pride and accepted this role,” Sharpe said. “He hasn’t been good, he’s been great in this role. He just gave you 20 [points], 14 [rebounds] and five [assists]. He gave you that. We’ve seen him have 15 assists. We’ve seen him have 11 assists. If I’m not mistaken, I think he’s leading the team in assists as the sixth man.

“With that being said, and we’ve seen AD’s progression into what he’s become, the majority of those assists are coming from Russ because Russ will attack the basket and drop the ball off. He’s been great with AD in the pick-and-roll.”