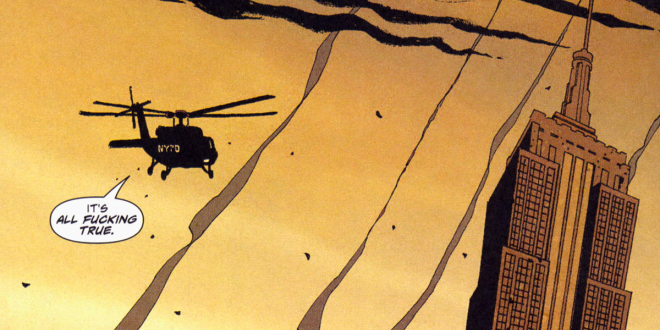 In Ava DuVernay’s upcoming live-action adaptation of Vertigo’s DMZ for HBO Max, a war-torn Manhattan becomes one of the last remaining “safe” zones in the middle of a civil war that’s devastated the United States of America. But life for those located on the titular demilitarized zone is anything but peaceful.

Unlike Brian Wood and Riccardo Burchielli’s DMZ comic, which primarily followed a journalist’s adventures as he traveled to Manhattan five years after the onset of the war, HBO’s series will instead revolve around medic Alma Ortega (Rosario Dawson) who returns to the island in search of her son. As Alma journeys through the ruins of the DMZ, she’ll encounter figures like Parco Delgado (Benjamin Bratt), one of the island’s most ruthless gang leaders vying to secure control of the island. Treacherous as the DMZ is, though, Alma will find a number of allies among the rest of the island’s remaining population of people who weren’t evacuated during the war’s onset.

This week, DC Comics announced nine new cast members coming to the show, who will all play some part in DMZ’s story of how Alma’s search for her son brings something unexpected to everyone’s lives. Rutina Wesley (True Blood), Rey Gallegos (Animal Kingdom), Mamie Gummer (True Detective), Agam Darshi (Funny Boy), Nora Dunn (The Big Leap), Jade Wu (Luke Cage), Juani Feliz (Harlem), Venus Ariel (NCIS: New Orleans), and Henry G. Sanders (Queen Sugar) are all set to appear across DMZ’s four episodes. No character details have been revealed specifically yet, other than that they’re all people who cross paths with Alma on her journey.

In addition to executive producing with Westworld’s Roberto Patino, DuVernay will direct DMZ’s first episode, with the remaining three being helmed by Juice and The Walking Dead director Ernest Dickerson. Watchmen writer Carly Wray was also announced as one of DMZ’s writers, and the batch of announcements as a whole makes it sound like HBO’s hoping for DMZ to be one of its next big critical hits that reminds audiences how comics stories aren’t all just about superheroes and aliens.

Though shooting for DMZ’s pilot wrapped last year, the project is still currently in production, meaning that we’re likely still a ways out from seeing and hearing more of what the show’s going to be like.