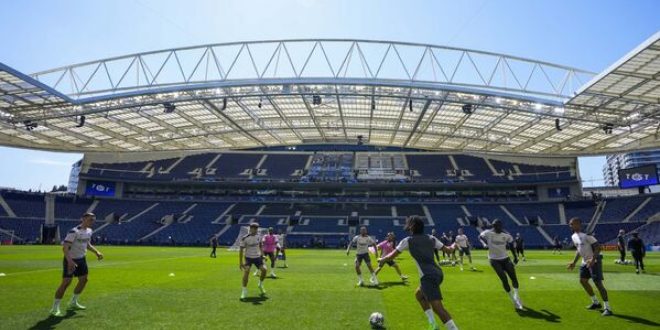 There’s Chelsea, of course — the somewhat surprising challengers who knocked off both Madrid clubs en route to Porto before only just sneaking into next season’s tournament.

But the other rival, even more dangerous, and the one most in their heads, is City, themselves.

Forward Raheem Sterling admitted as much in his pre-match remarks, and then there’s the evidence of nine months ago, when manager Pep Guardiola tinkered with his lineup against Olympique Lyonnais and was dealt a 3-1 defeat in Lisbon.

It’s why today’s showdown (2 p.m., DAZN) will really begin about an hour before kickoff, when the team sheets are published and Guardiola’s thought process revealed.

If he learned anything from last year’s quarterfinal, and the Champions League shortcomings that preceded it, Guardiola’s XI won’t deviate much, if at all, from that which got him to Estadio do Dragao in the first place.

In other words, he should go with a version of the teams that dumped a very good Paris Saint-Germain side out at the semi-final stage, advancing City to a first European final since the 1970 Cup Winners’ Cup.

In both legs against the Ligue 1 runners-up, City deployed a fluid front three, centred around a false nine. Bernardo Silva did well in the role at Parc-des-Princes, with Phil Foden and Riyad Mahrez to his left and right. Behind them, Kevin De Bruyne and Ilkay Gundogan supplied the passing and running, with Rodri working as the pivot. Joao Cancelo, Ruben Dias, John Stones and Kyle Walker made up the defensive corps in front of goalkeeper Ederson.

Left-back Oleksandr Zinchenko swapped out Cancelo in the return match, and the Ukrainian will likely start against Chelsea as well. Fernandinho replaced Rodri in the centre of the park, and De Bruyne switched roles with Silva. City eased to a 2-0 win.

Guardiola will likely think hard about which of Rodri and Fernandinho to start in the Champions League Final (Fernandinho has been really impressive of late), but other than that his team should pick itself, with De Bruyne reprising as the false nine.

Recent history should also be instructive for the City boss.

Since opposite number Thomas Tuchel was appointed to replace Frank Lampard in January, City have faced Chelsea twice — and lost both. Guardiola, incidentally, if not predictably, played wildly different teams on each occasion and was outdone tactically by both the Blues manager and his own overthinking.

In last month’s FA Cup semifinal, he went with a 4-2-3-1 formation fronted by Gabriel Jesus and supported by Sterling, De Bruyne and Ferran Torres. Both Rodri and Fernandinho played from the start.

Then, in an early May rematch, he tried to mirror Chelsea’s three-man defense with a complicated 3-1-4-2, with Gabriel Jesus and Sergio Aguero partnered up top and Cancelo and Benjamin Mendy working as wing-backs.

The Blues exploited both setups. Timo Werner got in behind the high press with regularity and put Hakim Ziyech through to score first at Wembley and then at the Etihad.

In the game of minds, Chelsea have the advantage. They’re living rent-free in City’s head,

Tuchel, for his part, has likely known his preferred lineup for some time. He was only waiting for good news regarding midfielder N’Golo Kante and goalkeeper Edouard Mendy, and both were passed fit this week.

Other than Mendy replacing Kepa Arrizabalaga between the sticks, Chelsea’s team should be identical to the won that prevailed at Wembley.

That means the excellent Thiago Silva will anchor a three-man defence that also includes Antonio Rudiger and Cesar Azpilicueta, with Ben Chilwell and Reece James working the wings. Kante and Jorginho will partner in the centre of the park, soaking up the City pressure and springing Ziyech and Mason Mount, who will operate just behind Werner.

It’s a predictable team, and Guardiola knows it. But he need not — indeed, must not — base his selections upon it.

Manchester City have had a memorable season. In ninth place as recently as December, a 15-game mid-schedule winning streak propelled them to the top of Premier League, which they ended up winning by 12 points.

They also won the League Cup by playing their way, by taking the game to their opponents, by stringing together dizzying passing sequences, by being so fluid in attack as to be nearly impossible to defend.

Now is not the time to deviate. City should be winning this Champions League final and completing an impressive treble.

All that really stands in their way is themselves.