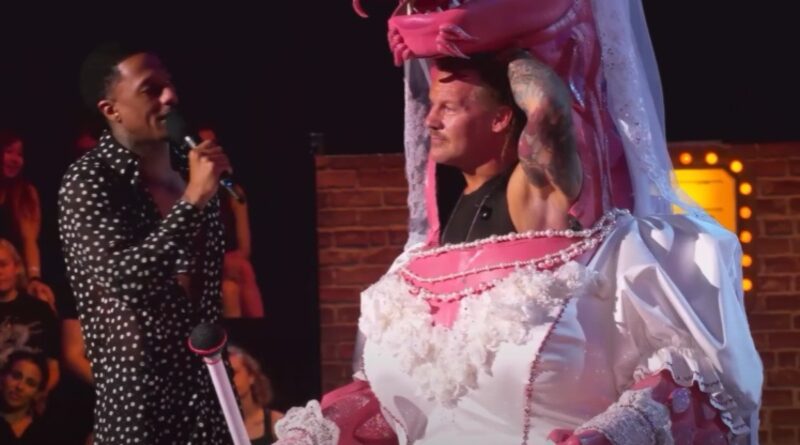 The Bride’s mask came off to reveal Chris Jericho, the former pro-wrestler and singer with heavy metal band Fozzy.

Host Nick Cannon chats with Chris Jericho (The Bride) on “The Masked Singer.”

There was a lot of funny business going on with The Masked Singer on Wednesday night (Nov. 16), as Fox’s quirky show celebrated “comedy roast night.”

After accumulating the fewest number of votes, The Bride was sent packing early.

The mask came off to reveal Chris Jericho, the former pro-wrestler and singer with heavy metal band Fozzy.

So why dress as a pink dinosaur in a wedding dress for national TV? “It’s always been inside of me, my whole life,” he said, staying in the ethos of comedy roast night.

“I was having a great time, this costume was amazing, it’s the best costume that I’ve seen on the show and I’m disappointed that I got beaten by an avocado.”

Avocado might have won that round, but he didn’t see the night out.

Underneath the funny suit was Adam Carolla.

The comedian played his exit with good humor. “I gotta tell you,” he told host Nick Cannon, “somebody farted in this avocado suit and it wasn’t me. No, I know my essence.”

When asked why he wanted to join The Masked Singer, another quip. “Ever since I was a young lad growing up in north Hollywood, California, I dreamt of this moment. And a scant 47 years later here I am.” He continued, “so this is a dream realized. and if I die tonight… I’m gonna be pissed actually.”

For the first time, each episode features a completely new round of masked celebs with only one contestant moving forward by the end of the hour. Plus, the audience votes in-studio for their favorite performance of the night, and the singer with the lowest tally will then unmask in the middle of the show before taking his or her place in the new Masked Singer VIP section to watch the rest of the episode.