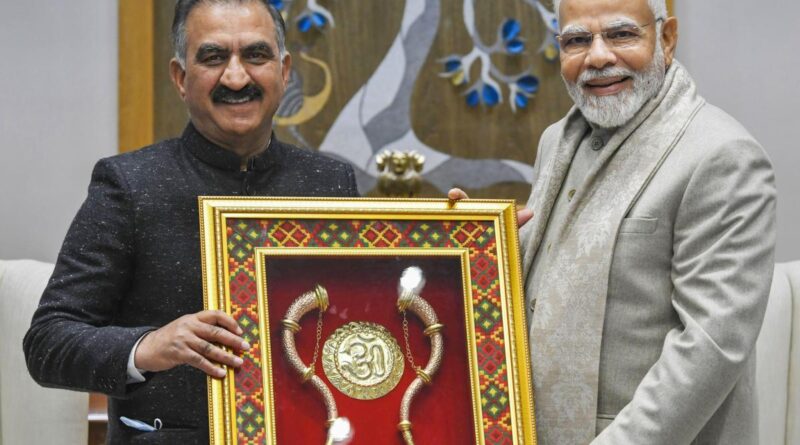 Himachal Pradesh Chief Minister Sukhvinder Singh Sukhu on Wednesday said that since the Congress government had come to power in the State in December 2022, the work for revamping the “derailed system”, which was done by the previous BJP government, had been started on priority.

Mr. Sukhu said the government was forced to take some tough decisions for generating the resources to fulfil its promises as it was inevitable. He was speaking in Hamirpur on the occasion of the 53 rd Statehood Day celebration, where he unfurled the national flag.

“It was on December 11, 2022, when the new government took over the reign of this hill State, and from the very first day started to work for revamping the derailed system. As per the government’s pledge for zero tolerance against corruption, stringent measures were being adopted to eliminate this social evil,” he said.

He added that the suspension of the Himachal Pradesh Staff Selection Commission was the hub of corruption, and selling jobs was the first step in this direction.

“Now the selection will be ensured purely on the basis of merit, in a fair and transparent manner,” he said.

The Chief Minister said that the economic health of the State was in utter disarray due to the extravagant spending by the previous government, which had led to a legacy debt of around ₹75,000 crore.

“Apart from this, the liability of paying the arrears of ₹4,430 crore to the employees, ₹5,226 crore to pensioners and ₹1,000 crore Dearness Allowance to both is on the present State government. As many as 900 institutions were opened by the BJP in the last 9 months of its tenure, without any budgetary provision, due to which the State has to bear an additional burden of ₹5,000 crore. Moreover, approximately ₹8,000 crore of the National Pension System (NPS) are held up with the Central Government. Despite all these challenges, the State Government has fulfilled its commitment to restore the old pension scheme (OPS), thereby benefiting 1.36 lakh employees,” he said.

“Restoring the OPS was not a political decision, but the State Government intends to protect the self-esteem of the government employees besides providing them the social security as they play a pivotal role in the development of the State,” he added.

The Chief Minister said that the government had set a target to harness hydropower, hydrogen, and solar energy in order to preserve the State’s environment and make Himachal Pradesh the country’s first green energy State by the year 2025.

“Now the selection will be ensured purely on the basis of merit, in a fair and transparent manner”Sukhvinder Singh SukhuHimachal Pradesh Chief Minister