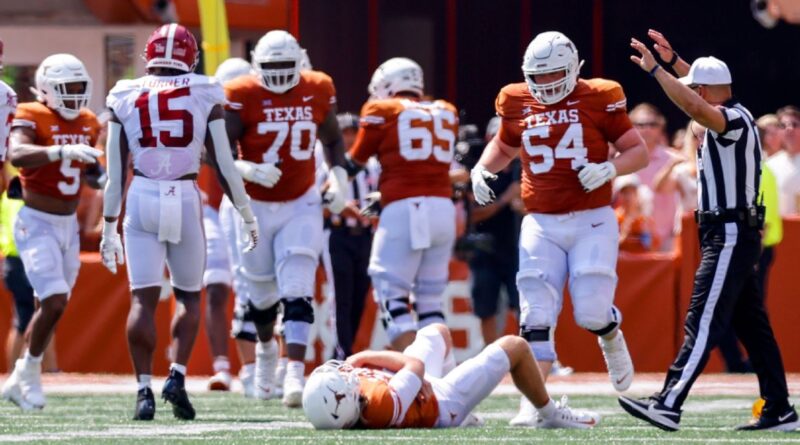 Texas starting quarterback Quinn Ewers suffered a left clavicle sprain in the the first quarter of the Longhorns’ 20-19 loss to No. 1 Alabama on Saturday and did not return.

“We don’t know the severity of the injury,” Texas coach Steve Sarkisian said after the game.

Ewers was taken to the locker room after the freshman quarterback was driven into the ground by the Crimson Tide’s Dallas Turner late in the first quarter. He later returned to the sideline during the second half, wearing street clothes.

Turner was flagged for roughing the passer after landing on Ewers on the play, with the official saying it was because he drove Ewers into the turf.

Ewers immediately grabbed his left shoulder after the hit and stayed down on the field while special assistant to the head coach Gary Patterson and trainers attended to him. After going to the sideline, Ewers went to the medical tent before then heading to the locker room with a towel over his head.

He had kept Alabama on its heels, going 9-of-12 for 134 yards, and had just completed a 46-yard pass to Xavier Worthy to the Alabama 1-yard line on the previous play.

“I thought Quinn was in a really good rhythm when he was in the game,” Sarkisian said. “I felt really good about the way he was playing tonight against a really good defense.”

Card relieved Ewers, and Bijan Robinson scored two plays later to tie the score at 10-10 on the first play of the second quarter.

Ewers, a highly touted transfer from Ohio State, made his first collegiate start last week against Louisiana-Monroe, going 16-of-24 for 225 yards and two touchdowns and one interception in a 52-10 win.