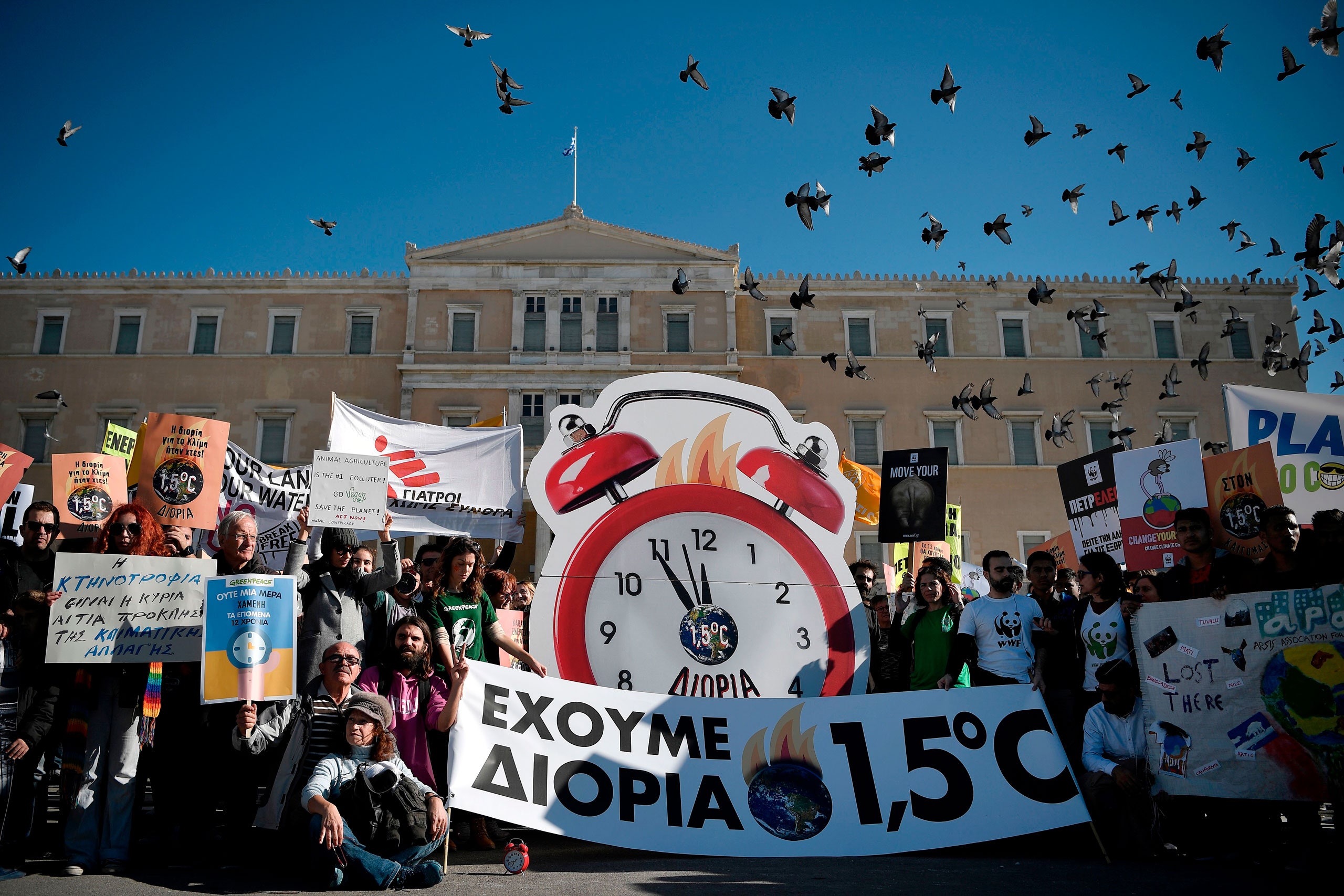 How 1.5 Degrees Became the Key to Climate Progress

Subscribers to The Climate Crisis newsletter received this piece in their in-boxes. Sign up to receive future installments.

It’s Earth Day +51, as we near the end of President Biden’s first hundred days, and forty world leaders are scheduled to join him for a virtual summit on climate change. “For those of you who are excited about climate, we will have a lot more to say next week,” the White House press secretary, Jen Psaki, said last Thursday, which is a sweet way to think about it—better than “for those of you who are existentially depressed about climate.”

But, amid the blizzard of numbers that will come this week (such as a new report from the Lawrence Berkeley National Laboratory showing that America is “Halfway to Zero” in cutting the carbon from its electricity sector, as long as you don’t count the methane that all those new gas-fired power plants produce), it’s possible to discern the single, unlikely number that is really driving action at the moment, and it’s important to recall how it came to enter the debate. That number is 1.5 degrees Celsius, which is enshrined in Article 2 of the 2016 Paris climate accord as the world’s official goal for how much we will let the planet warm.

In the early decades of the climate era, government negotiators used two degrees Celsius as a target—that number has a tangled history, tracing back to at least the mid-nineteen-nineties, when Angela Merkel, then Germany’s environment minister, and other European officials seized on it as a benchmark. But there was never much hard science behind it, and by the mid-two-thousands the rate of damage already observable around the planet had begun to spook researchers, not to mention the residents of the most vulnerable countries. Even though the temperature had risen less than one degree Celsius, we were already seeing extensive Arctic ice melt, for instance. So the Alliance of Small Island States, with a lot of leadership from the Caribbean nations, and some of the African countries most vulnerable to drought, began to talk about a lower target. I first remember hearing chants of “1.5 to Stay Alive” at the Copenhagen climate talks, in 2009, and the Barbadian poet Adisa Andwele performed a song of that name for the assembled delegates. But those negotiations were such a mess that the short final document that the summit produced reiterated the old target of two degrees, merely mentioning the new number as a “consideration.”

Once the new number was out there, however, it took on a life of its own, and by the time the Paris climate talks met, six years later, it had become a rallying cry for movements. Paris was a mess, too—the pledges that countries made to reduce their emissions would actually lead to a world that heats by an apocalyptic three degrees Celsius—but, as a sop to campaigners, the negotiators put the 1.5-degree target in the opening section, where, one imagines, they figured it wouldn’t do much damage. They were wrong. In the years since, the number has dramatically reorganized global thinking around the climate, setting up the possibility that we might improve on the Paris timetable.

The most important result was that, in 2018, the Intergovernmental Panel on Climate Change prepared a report on the projected impact of exceeding the 1.5-degree target and the steps needed to meet it. And what it found was that, in essence, we’d need to cut emissions nearly in half by 2030, and get to net zero by 2050. The language was opaque—“in model pathways with no or limited overshoot of 1.5°C, global net anthropogenic CO2 emissions decline by about 45% from 2010 levels by 2030 (40–60% interquartile range), reaching net zero around 2050 (2045–2055 interquartile range)”—but it was enough to reorient thinking. As the famed energy analyst Daniel Yergin told Bloomberg’s Eric Roston, in February, “I think you could say that is one of the most important sentences of the last few centuries. It has provided an incredibly powerful traffic signal to tell you where things are going.” Hence the spectacle of the biggest American banks declaring their net-zero-by-2050 plans (and the counter-spectacle of campaigners reminding them that the more important date is 2030). It was a big deal when a joint communiqué from the U.S. and China, following last week’s trip by John Kerry, Biden’s climate envoy, used the phrase “well below” two degrees. As Kerry told me, “That ‘well below’ two degrees language is important. That can’t logically mean 1.9 or 1.8.” Indeed, the White House explained that a key goal of the summit this week “will be to catalyze efforts that keep that 1.5-degree goal within reach.”

It’s entirely possible that, in fact, it’s no longer in reach; an Australian study published last week predicts that we’ll pass 1.5 degrees in the early two-thousand-thirties, and some recent research indicates that we could pass it as soon as 2024. But, by aiming for it, we clearly improve our chances of stopping closer to two degrees. And we’re only aiming for it—and this is the key point—because voices from the margins (tiny island nations, nascent movements) started demanding something that seemed, at first, mostly an annoyance to the powers that be. They asked for what they needed, and it’s made a huge difference. And it helps explain why, earlier this month, the remarkably farsighted Greta Thunberg said that she’d boycott the next global climate talks, in Glasgow, in November, if vaccine distribution hasn’t proceeded to the point where small, poor countries will be able to fully participate. It’s not that Tuvalu or Grenada or the Maldives put much carbon into the atmosphere—it’s that they put the important ideas into the debate.

Sally Ann Ranney is the president and a co-founder of the American Renewable Energy Institute, a board member of the National Wildlife Federation, and an adviser to the Getches-Wilkinson Center, at the University of Colorado Law School. Her new project, Global Choices, is an N.G.O. led and staffed by women, and focussed on preserving the Arctic and Antarctic ice sheets. (Our conversation has been edited for length.)

You’ve taken on the task of helping defend the Arctic ice sheet. What do the rest of us need to know about its importance?

Most people don’t know that what happens in the Arctic doesn’t stay in the Arctic. Why? Because the ice shield covering the Arctic Ocean is actually the centerpiece of an indispensable planetary cooling system, which is maintained by the albedo effect—the reflection of the sun’s heat and radiation back into space. When sea ice retreats, heat is absorbed by the dark ocean, warming water and air temperatures, melting more ice, and on it goes. This is affecting the very stability of global climate regulators. The jet stream, for example, has become wobbly, allowing the polar vortex to dip its killer cold as far south as Texas in February of this year. Severe droughts, fires, and floods—as far-flung as California and northern Africa—and the accelerated Siberian permafrost thaw and methane releases are suspected to be linked to Arctic sea-ice loss. The point is, the Arctic is climate-change ground zero, and Earth’s supra-systems are interconnected and interdependent. We are making this urgent situation more visible and actionable—taking it to the top of the global agenda and to the streets. Think about this: one metric ton of CO2 melts thirty-two square feet (three square metres) of ice.

At the moment, the central Arctic is kind of a commons, without an obvious owner. But what’s changing politically as the ice melts, and what kind of voice do indigenous people have as the great powers start to compete?

Geopolitics in the Arctic are heating up as the ice is melting down. Under international law, the central Arctic Ocean is part of the “high seas,” because it lies outside the jurisdiction of any nation. Climate change is taking its highest toll in the Arctic, exposing resources now hungrily eyed for exploitation and transforming the region into the new Wild West. China, India, and South Korea, along with a score of other countries, are official observers of the Arctic Council, an intergovernmental advisory group. The Arctic coastal nations have submitted proposals to the U.N. to extend their two-hundred-mile exclusive economic zone. The Russians’ submission is the most ambitious and contentious, extending all the way to the North Pole and across the central Arctic Ocean. Indigenous groups are becoming more vocal and active in policy, but there are differing opinions among these peoples—some of whom are ice-dependent for their livelihood and some of whom are not—about what development is acceptable. Six indigenous organizations, representing half a million of the four million Arctic residents, are permanent participants in the Arctic Council. They cannot vote, but they have veto rights. The jury is out on how nation-state ambitions are going to play out with indigenous interests.