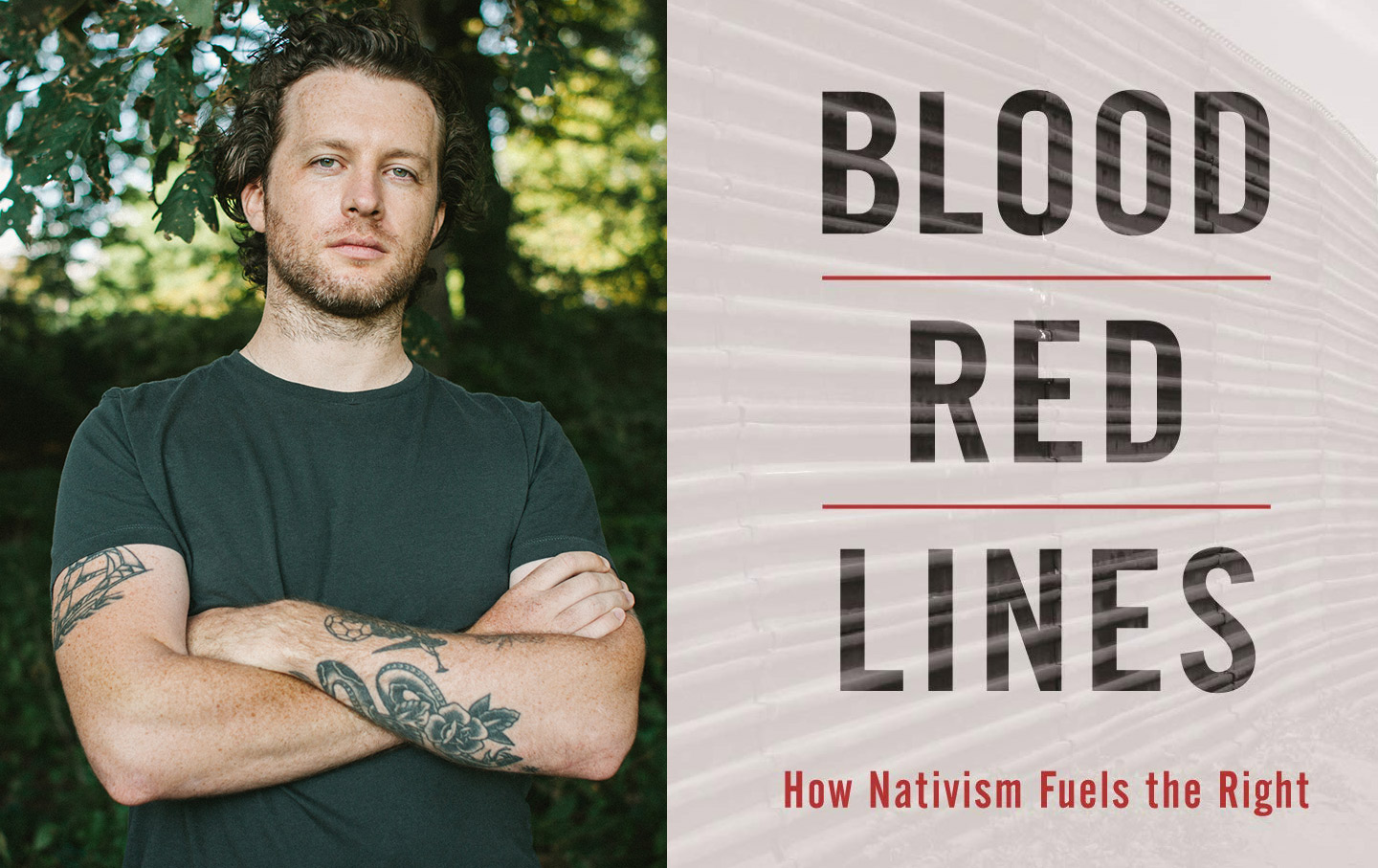 Since Donald Trump’s election, pundits and reporters have been debating how to describe the movement that propelled him to the White House. Did his supporters’ attacks against immigrants, street brawls with antifa, and cheeky embrace of authoritarianism really constitute 1930s-style fascism? Or was it rather the “Southern strategy” on steroids, strongman populism, or savage capitalism?1

When journalist Brendan O’Connor considered the question, he saw echoes of the 1930s, but realized that Trump’s movement deserved an entirely new category: border fascism.2

When O’Connor started on his book in summer 2018, Trump had just begun implementation of Stephen Miller’s zero-tolerance border policy; soon, thousands of migrant children would be caged and separated from their parents. As O’Connor finished his book, police across the country were arresting, beating, and launching tear gas at participants of the largest anti-racist movement in US history. In Blood Red Lines: How Nativism Fuels the Right, O’Connor tries to get to the root of this mix of xenophobia and state violence. Border fascism, he explains, is a new strain of a far-right nationalism that fetishizes boundaries. The racism of this movement isn’t always overt, but its underlying ideology is based on a racialized understanding of citizenship that idolizes “law and order” and attacks “the illegals” for violating the supposed sanctity of the country’s border.3

ared lson: The big idea I got from the book was the idea of border fascism. How did you come to that? And was there any distinct moment in your report or research when that became clear to you?5

rendan onnor: One of the things I noticed in the course of my reporting on the far right is that over the past few years, there’s been a proliferating self-taxonomy of individuals and groups trying to name what they are doing, as a way to set themselves apart from rival factions.6

In a kind of grandiose way, they’re trying to plant the flag and say, “This is the name of this political project. And we want everyone to rally around this.” Whether that’s ecofascism, white nationalism, or a kind of workerist populism. One of the things I wanted to be careful to avoid in my reporting and my book was legitimizing any one of those [projects] as the banner for the whole group. But there is something that unites all these different factions and all these different sub-groupings and ideologies. In my peripheral and historical research, I ended up coming across a piece about the Mussolini regime that focused on the particular characteristics of the fascist regime in the border regions of Italy, with the Slavic countries across the Adriatic.7

There are scholars that refer to this part of the regime as border fascism. And it just sort of clicked: I was going to borrow this idea from historical scholarship and run with it as a new category to try and capture a variety of different phenomena and a groups that are pursuing different strategies but that seemed to me to be participating in the same political projects and have ideological resonances with each other. Nobody calls themself a border fascist. But this seems like a useful framework to apply.8

JO: Many of the far-right terrorists who massacred people in the 2010s were ecofascists. They recognized that the environment is going to hell. How do you explain the rise of ecofascism, and how does that collide with border fascism?  9

BO: I think they’re part of the same phenomenon, the same political impulse. In a very serious way, [they are] harbingers of a politics to come. The displacement of masses of people is going to accelerate as the climate crisis deepens. The fact that nativist politics coincides with and comingles with this ecofascist ideology isn’t just an accident of history. I think [the two] are co-constitutive. The ecofascist ideology would not take the shape that it does without the antecedent of nativism. And then nativism becomes a major part of ecofascist ideologies.10

JO: You write about how “digital authoritarians” and certain YouTube media personalities bring fringe far-right, alt-right ideologies into the mainstream, such that now you see people like Tucker Carlson talk about how immigrants are “invading” Europe. How do you explain this?11

BO: I think that’s a testament to how adept activists on the far right are at identifying and using new media technologies to spread their ideas, to insinuate themselves into conversations. It seems to me over the past few years that these individuals and groups have been able to push the terms of the discourse toward a more explicitly brutal direction. Making the open discussion of immense cruelty something that more people are willing to countenance. There are fewer layers of euphemism to peel back.12

An interesting development on that front though is that many of those figures who were so successful at doing that in the early years of the Trump era have largely been marginalized and de-platformed. Their reach has been impeded. That’s not to say that this fight is over, but that front is not necessarily as active as it was a couple of years ago.13

JO: You talked about the relationship between white supremacists and state power. At one point in the 1980s, as the scholar Kathleen Belew has shown, they considered themselves revolutionaries fighting against the government. But for four years they felt like they had the backing of the state. What is their relationship to the state in the years to come? 14

BO: Not only did Trump lose the election and Republicans lose control of Congress, but the response to the Capitol riots has been a really aggressive crackdown against the participants. I think this can be understood as the state trying to reassert its monopoly on political violence, reassert legitimacy and authority after having been embarrassed by the events of January 6. But it’s going to increase the influence of the accelerationist, anti-state currents.15

This is now colliding with the mass base of Trump supporters who are infected with QAnon conspiracy theories, who are being told not only by the president but by wide swaths of the Republican Party that the election was not legitimate and that it was stolen from Trump. And so the influence of the accelerationists, who say there is no political solution, [is leading many people to believe that] the only thing to do is withdraw from civil society or take up arms against civil society. This is a current that is militating against movement building, against party building, against organization, and that just emphasizes the aesthetics and practice of strength and violence.17

Now, whether or not this comes to dominate not just the far right but the right rests on what happens with the Republican Party over the course of the next couple of years. If the Republican Party comes to be dominated by conspiracy theorists and ethno-nationalists, then it’s harder to make the argument that there’s no political outlet, or expression of these views. But that will only happen if and when the donor class and the corporate donors decide to abandon the Republican Party and say, “Screw this, this is too difficult to deal with, we’re just going to throw in with the Democrats.”18

If that happens, then the anti-state tendency will recede. But if the ruling class and the capitalists that are in bed with the Republican Party reassert control over this party, then I think the consequences of that will be an upsurge in anti-state violence.19

JO: In your book, you reference [Max] Horkheimer’s idea that you can’t talk about fascism if you aren’t willing to talk about capitalism. Why is that? 20

All of that is to say that we have to understand these new forms of reaction as responses to systemic crisis. Whether you are a Marxist or socialist or liberal, it’s hard to deny that we’re living in a period of deep crisis that began with the 2007–08 financial collapse and that hasn’t been resolved. The rise of border fascism is something that grows out of the contradictions and conditions of neoliberal capitalism. It doesn’t arrive from without. It’s not an alien invasion. It’s something that’s a consequence of the existing order.22

Especially now that we’re in the era of the Biden administration, it’s especially important that we don’t bracket what happened under the Trump era. We need to understand this movement is going to ebb and flow and express itself in different ways until we get to the root of what’s causing it.23