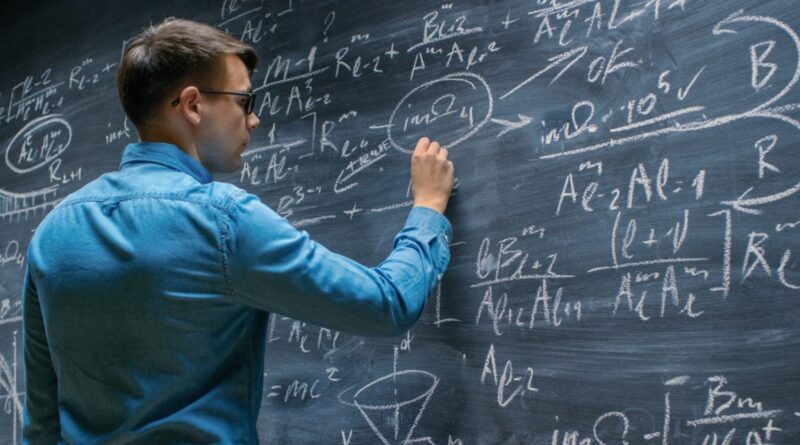 It is our human nature to tinker with rules, as anyone who has argued over dubious interpretations of the game Monopoly will attest. Rule-breaking may hold the key to giving us an edge over machines that, for all their emerging capabilities, are tied to fixed directives. A close look at how mathematics comes to be demonstrates the power of departing from accepted convention, mathematician and author Junaid Mubeen writes in Mathematical Intelligence: A Story of Human Superiority Over Machines.How

Humans have long been dreaming up concepts and creatures that exist outside our physical reality. The oldest known figurative art object, discovered in a cave in the Lone Valley of south-western Germany, is the Lion Man of Hohlenstein-Stadel, a chimeric figurine that is half-human, half-lion. Sculpted around 40,000 years ago for purposes unknown, the Lion Man is a product of pure human imagination. It signalled a new cognitive ability for humans: counterfactual reasoning. We were not merely seeking to understand our lived everyday experiences, but also contemplating what other realities might exist. We were daring to ask what if? – an apparently simple question, and an antecedent to creative thought. When we’re faced with a situation, the representations we choose in order to interpret that situation are surrounded by what cognitive scientist Douglas Hofstadter calls an ‘implicit counterfactual sphere’ – an array of variations that each diverge, even if slightly, from our perceived knowledge of the world.

Throughout history, creative expression has been marked by an ability to break with convention. Hofstadter calls this ‘jumping out of the system’ or, to use his quaint shorthand, jootsing.6 The most innovative artists are the most disruptive: those brave enough to venture beyond accepted precedent and to open their work to a greater sense of possibility. Through his nine symphonies, Beethoven uprooted the ‘classical’ rationality of Western music tradition and injected it with emotional impact. Caravaggio transformed Italian painting through the intense realism of his work, and a use of light and shade – chiaroscuro – that foreshadowed photography. James Joyce’s Ulysses revolutionised the novel by introducing a striking plethora of styles, points of view and sub-literary genres into its framework. These artistic shifts are so contrarian that they are usually met with derision or confusion in the first instance, only to be accepted as perfectly commonplace later. New rules displace old ones, birthing new genres in the process.

Modern forms of entertainment, driven by technological advances, are a licence to bring our wildest imaginings to life. My favourite movies are a roll-call of counterfactual thought (and echoes of dystopian fiction dating back at least as far as Mary Shelley’s Frankenstein): what if machines became sentient and had objectives that threatened humans (Terminator, The Matrix)? What if a subset of humans developed mutations that gave them superpowers (X-Men)? What if time travel were possible (Back to the Future)? You may well question my taste in films, but you will hopefully appreciate the counterfactual mindset that is needed to create these worlds. Similarly, video games are now a portal to some of our most mysterious worlds. Game designers have the space to create a set of rules and explore the realities that follow those choices. These worlds often defy the rules of our ordinary lives – worlds where the laws of gravity and motion are upended as a deliberate design choice.7

In science, too, we rely on breaks with accepted rules to make great leaps of progress – what philosopher Thomas Kuhn famously called ‘paradigm shifts’.8 Disruptions to scientific thinking, and to artistic expression, require more than incremental advances. Mathematics is the most disruptive of sciences, one of the oldest means we have of creating new worlds, however outlandish. It puts us firmly in the director’s seat, setting the stage with whatever axioms we see fit. Our prize is newly conceived worlds that are often at odds with the mathematics we have studied and the rules we have been taught to accept. The driving force of mathematical intelligence resides in this freedom to create – and recreate – entire areas of thought.

Euclid’s Elements, for instance, was the foundation of rigorous mathematical proof. All the geometrical statements in the Elements stem from Euclid’s initial store of ‘postulates’. The fifth of those postulates states, in essence, that if you take any line, and any point off that line, then there is exactly one other line parallel with the original that passes through the point. That seems self-evident enough once you get past the convoluted wording, and Euclid even believed that it didn’t need to be stated as a postulate because he would be able to derive it from the others. This statement, it can be shown, is equivalent to declaring that angles in a triangle add up to 180 degrees (a claim that seems beyond any reasonable dispute).

As it happened, Euclid was never quite able to produce a proof of the fifth postulate, so was forced to call on it as an ‘axiom of last resort’. In the centuries that followed, mathematicians tried to nip the fifth postulate in the bud by demonstrating that it is a logical consequence of the others, as Euclid had suspected. But the fifth postulate resisted these attempts, which eventually led a group of nineteenth-century mathematicians to contemplate the most daring of what ifs – namely: what if, after all, we allowed more than one line through that point to be parallel to the original line? What if we allow the angles of a triangle to total something other than 180 degrees?

Visualising these possibilities is a struggle for most people, but only because we are naturally drawn to flat surfaces, where Euclid’s ideas hold up neatly. But what if we think instead about curved surfaces, such as a sphere, which is (roughly speaking) the shape of the earth? If we draw parallel lines at right angles to the earth’s equator, heading north (lines of longitude, for example), they will meet at the North Pole despite being parallel at the equator. If you go on to form a triangle between two points on the equator and the North Pole, then two of the angles are right angles, which means the sum of the three angles is in excess of 180 degrees. We now have a distinctly non-Euclidean geometry, where parallel lines are no longer permitted, and where triangles do not exhibit their usual behaviours.

This particular brand of geometry, known as elliptic geometry, should actually feel more comprehensible because it reflects the situation with a known physical structure, the earth (understood by everyone bar resolute flat-earthers). Just as our understanding of the world is enriched when we reject the notion that it is flat, so mathematics can empower us with richer geometries that transcend the properties of a flat plane.

Creative thinkers must be prepared to suspend preconceived notions and physical norms. Why, after all, stop at the earth’s surface? The very first non-Euclidean geometry to be dreamt up was hyperbolic, situated in an even stranger world which tears up the fifth postulate by allowing infinitely many parallel lines to pass through the same point. Hyperbolic geometry is even more abstract, even more fanciful, but every bit as justified on its own terms. It pops up in models of special relativity as a way of describing the relationship between space and time, and it has also been posited as a way of describing social networks – ‘useful’ applications abound for those who seek them.

None of the alternatives to Euclid’s fifth postulate renders the Elements false; they simply add to our worldview with equally valid frameworks for studying geometry, allowing for playful exploration with different building blocks. Janos Bolyai, a Hungarian mathematician who was among the first to dream up hyperbolic geometry, proclaimed in a letter to his father that ‘out of nothing, I have created a strange new universe.’

Can today’s computers claim as much? There are now programs that can create photorealistic images of people who do not exist. They work using a clever technique called generative adversarial networks, which makes use of two models. The first, called the generator, is trained to create new examples that share a likeness with actual people. The second model, the discriminator, then looks at all the images together and tries to work out which are real and which are fake. It’s a game of cat- and-mouse, where the first model is trying to deceive the second into believing its creations are real (hence the term adversarial). This process repeats until the discriminator is fooled about half of the time. At that point, the generator is producing fake images that are indistinguishable from real ones. This technology (which is also at the heart of deep fakes) is poised to transform photo-editing, special effects and industrial design. You will almost certainly have already been exposed to multimedia content that dazzles and inspires you, without realising that it is the handiwork of computers.

While a computer may dream up scores of new human-like figures after being fed images of real people, however, it could not conceive, say, the elves, dwarves or wizards that inhabit J. R. R. Tolkien’s Middle earth. Generative adversarial networks may help to fine-tune our fantastical imaginings on the big screen, but, while there are some efforts underway to direct them towards creating new worlds from old (replacing horses with zebras in videos, for instance), those worlds are predominantly envisioned in human minds, which readily cast aside the familiar and ordinary.

Excerpted from Mathematical Intelligence: A Story of Human Superiority Over Machines by Junaid Mubeen. Published by Pegasus Books. © Junaid Mubeen. Reprinted with permission.