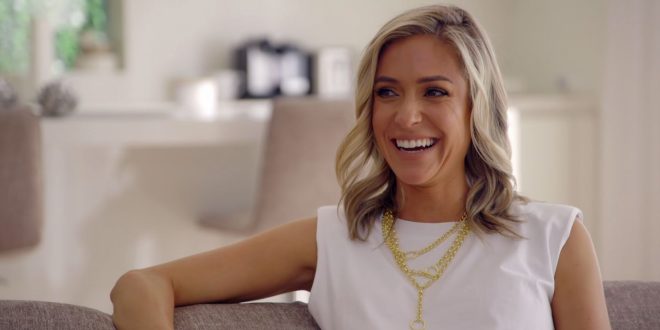 During tonight’s brand-new Hills episode, the Laguna Beach gal had a brand-new beginning with the MTV crowd. The mother of three was “back in LA, bitches” for four days (visiting from her Nashville homebase) — so it was only appropriate to pop some bubbly and party with some old pals at a “Sexy in the City”-themed party. With plenty of hugs and catch-ups to go around.

Check out a roundup of the mother of three’s interactions with the original cast members below, and sound off on her visit in the comments. Then be sure to keep watching The Hills: New Beginnings every Wednesday at 9/8c.

Sure, the duo has had some “ups and downs” — never forget “It’s f*cking on, bitch” during Season 5. But they were able to catch up one-on-one before the night out in the City of Angels and have a heart-to-heart about their similar life circumstances (divorces and dating lives).

“Oh my God” is right. The former couple shared a big embrace when he arrived and, naturally, Kristin made a comment about his longer-than-usual locks (can’t blame her?). She spoke about her kids (ages 8, 6 and 5) and he said his mom Linda was “excited” they were seeing each other (Kristin wanted Brody to tell Linda she loves her). The episode ended with Brody and Kristin (and Audrina in his car?!) meeting up at the beach 10 hours post-party — and viewers will see their conversation on the next episode.

Kristin “loved” that Frankie was still with Jen, who stated that Kristin “looked the same.”

Heidi “wouldn’t be with Spencer if it wasn’t for Kristin and Brody back in the day.” She gushed that Kristin is a “great friend,” and the gals have kept in touch through the years. Heidi was disappointed that she was left out of the get-together with Audrina (the trio did spend time together in Tenessee a year ago), but they did make up for it at the Tinseltown event.

The Laguna Beach High School classmates (2008 graduates) had not seen each other since they were 18. Both said it felt like “no time had passed,” and Kristin met Ashley for the first time.

The Italians (!) had “spaghetti and meatball time” back in the day (JB’s description of their past). Mutual compliments about how they each looked great followed — and a big ol’ hug.

“Fire,” indeed. Spencer praised her for how she was “handling everything and running a business.” And Spencer’s beverage choice (straight tequila) prompted an enthusiastic “woo!” from Kristin.