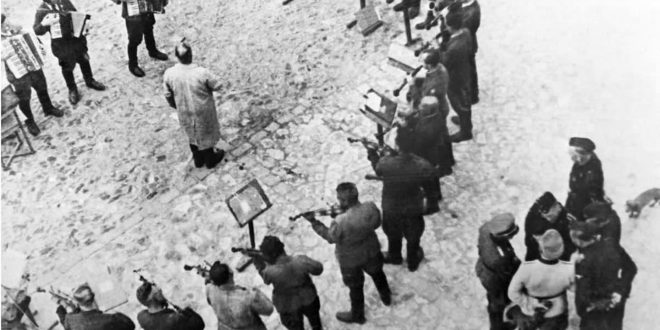 How Nazis Used Music to Celebrate and Facilitate Murder

In December 1943, a 20-year-old named Ruth Elias arrived in a cattle car at the Auschwitz-Birkenau concentration camp. She was assigned to Block 6 in the family camp, a barracks that housed young women and the camp’s male orchestra, an ensemble of incarcerated violinists, clarinet players, accordion players and percussionists who played their instruments not just when the prisoners marched out for daily labor details, but also during prisoner floggings.

Performances could be impromptu, ordered at the whims of the SS, the paramilitary guard of the Nazi Party. In a postwar interview, Elias discussed how drunken SS troops would often burst into the barracks late at night.

First, they’d tell the orchestra to play as they drank and sang. Then they would pull young girls from their bunks to rape them. Pressed against the back of her top-level bunk to avoid detection, Elias heard the terrified screams of her fellow prisoners.