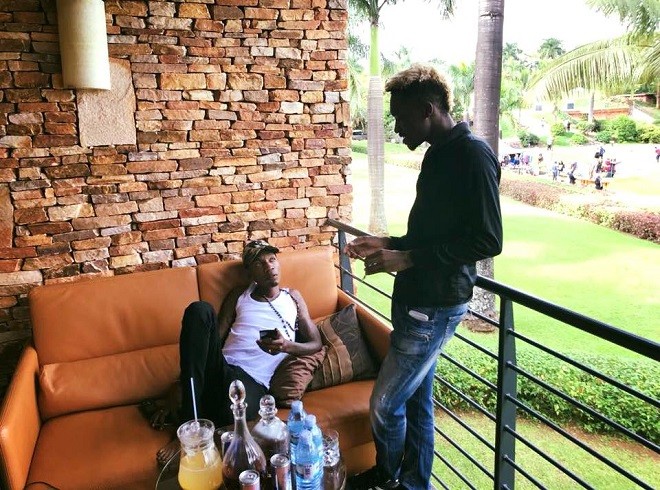 A Pass At The Podium With Brian White.

How Socialite Brian White Convinced Singer A Pass Onto The Podium!

It has now been confirmed that singer A Pass finally joined The Brian White White foundation aka “The Podium”. This was confirmed by our snoops who spotted the Didada hit maker in the camp on several occasions.

According to a credible source, A Pass’ move to join the podium sparked off on the day he performed at comedy stores organised by Alex Muhangi and Brian White showered him with money.

It was from then that A Pass chose to join the camp as we can affirm.

A Pass who always declined commenting about the podium has been seen praising it today all of a sudden.

“#ADaySpentWithBryanWhite
It’s always good to get to know people before you judge them, I have seen so many people tell me that they thought I was so arrogant until they met me….. So I finally met the gentleman “Bryan White” bryanwhitefoundation
I really liked how he treated the people around him like brothers, that really impressed me.
The guy knows and loves music and am glad he is one of my fans and that one of the reasons why we met, he introduced me to new and old music, because he was the DJ of the day… I really liked his personality and his vision for the youth, I think it’s best for him to give the youth more encouragement to hustle than give them money and still they will be broke again very soon but am proud of this guy for giving back to the society because we have many rich people in our society that don’t care about others. #TovakuPodium #AfricanYayoAlbum” He posted on his social media.

Well-known for being controversial, we wait to see what the future holds for A Pass at the podium.