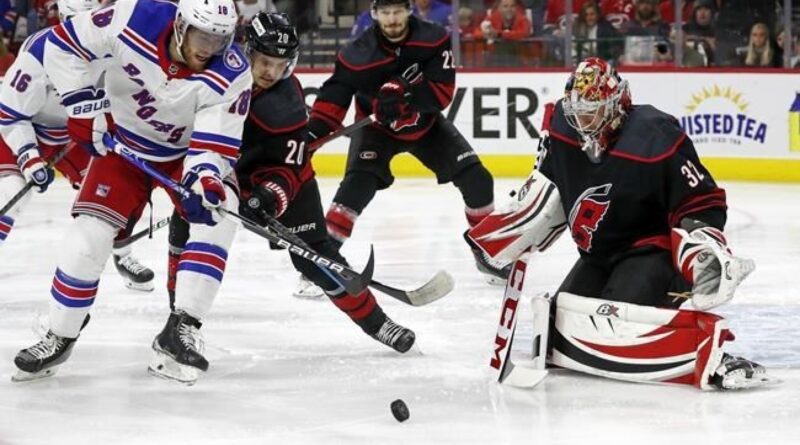 RALEIGH, N.C. (AP) — The Carolina Hurricanes found themselves in a quick hole in a Game 7 against the New York Rangers. Losing key players like Seth Jarvis and goaltender Antti Raanta only made things tougher for any chance of a comeback.

RALEIGH, N.C. (AP) — The Carolina Hurricanes found themselves in a quick hole in a Game 7 against the New York Rangers. Losing key players like Seth Jarvis and goaltender Antti Raanta only made things tougher for any chance of a comeback.

The Hurricanes lost Jarvis to an upper-body injury after he took a jarring first-period hit by New York defenseman Jacob Trouba, then lost Raanta in the second period when he went down after stretching out for a stop and was helped off the ice putting no weight on his right leg.

It was part of a rough all-around Monday night in a 6-2 loss to the Rangers that ended their second-round series in the Stanley Cup playoffs.

Afterward, coach Rod Brind’Amour said Raanta’s injury was serious enough he wouldn’t have been able to play had Carolina advanced.

“No chance,” Brind’Amour said. “He’s going to get checked out tomorrow. That knee would’ve been out probably — I don’t know for sure, but he didn’t look too good walking out of here, or limping out.”

Carolina gave up two power-play goals in the opening 10 minutes of the game to send the Hurricanes into catch-up mode against a Rangers defense anchored by star goaltender Igor Shesterkin. The Jarvis injury came between those two goals, while Raanta’s came with 4:23 left in the second period while the Hurricanes were still within 2-0.

The 33-year-old Raanta — pressed into a lead role when No. 1 goaltender Frederik Andersen suffered a lower-body injury in mid-April — had taken a shove from the Rangers’ Chris Kreider on one side of the crease while making a stop, then skated to his right as the puck headed toward Mika Zibanejad on the other side.

Raanta extended his right leg in a split to make the stop, and almost immediately went forward and landed face down on the ice. He was eventually helped back to the bench with assistance from teammates Vincent Trocheck and Nino Niederreiter before heading into the locker room, not putting any weight on his right leg.

Raanta was ruled out and rookie Pyotr Kochetkov, who came on in Game 2 of the the Hurricanes’ series against Boston when Raanta exited early with an injury, entered. But he quickly gave up a goal to the Rangers’ Ryan Strome for a 3-0 deficit, and ended up surrendering three goals on 12 shots in relief.

Jarvis, a rookie top-line winger, was knocked from the game on Trouba’s high hit near his left shoulder and head with about 12 1/2 minutes left in the first period. The hit sent Jarvis sprawling to the ice and he could only crawl back to the bench.

Jarvis was too wobbly to even sit upright on the bench and needed assistance from teammates to get directed into the locker room.

“He might be on the smaller side, but he’s feisty and he’s got a lot of heart,” defenseman Jaccob Slavin said of the 5-foot-10, 175-pound Jarvis. “Obviously he’s a big component of our offense. … It shouldn’t change the outcome of the game but we definitely feel when his presence isn’t there.”

Making matters worse, the Hurricanes took a penalty for too many men on the ice while trying to sub for Jarvis, with Kreider converting 14 seconds later with a perfect redirect on a Zibanejad pass.

“That kind of summed it up right there on that shift,” Brind’Amour said. “That was a tough blow in this game.”

The team soon ruled Jarvis out the rest of the night with what was described only as an upper-body injury.